It's been two months since my last WWE review and I'm sure some of you will agree that's just too long. So today I'm back with a new WWE action figure review, this one takes a close (and I do mean CLOSE) look at another Legends Elite Flashback release, Yokozuna.

In the old WWF, Yokozuna was known for being a particularly monstrous heel. His grudge matches with the Undertaker led to the inclusion of the devious casket match as a WWE signature event. In fact, Yoko is the reason for the over-sized casket used in a lot of those matches. To say he's big is an understatement. "Just how did Mattel pull off such a massive body style?", you ask? Jump ahead to read the review!

Mattel's tackled several super-heavyweights before, but Yokozuna posed a unique challenge because the sumo wrestler thing isn't just a gimmick. You can get his stats at his Wikipedia page. With dimensions like those, Mattel couldn't rely on nearly anything from their existing parts library. Yokozuna is a nearly 100% new sculpt. The reused parts can be found in his arms and possibly the feet. Otherwise everything's been built for him. The sumo belt is a separate piece that's been glued in place and features some dangly bits along the front.

Although Mattel spent some cash on the new tooling, they were surely able to save some greenbacks in the paint department. There is very minimal paint on Yokozuna (at least intentionally, anyway), but it's sharply done. Most of his paint apps are concentrated on his head and his lower legs and feet feature black paint to recreate his ankle wraps. Everything else is molded in the appropriately colored plastic. 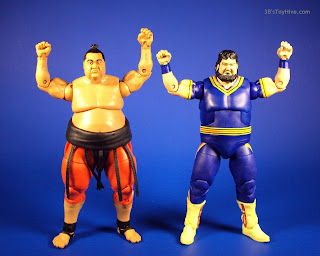 The new body also introduces some new articulation for the line. Let me rephrase that, it features new articulation for a male character in the line. Instead of the usual inverted "T"-shaped lower torso, Yoko utilizes a chest joint similar to what the Divas figures get (see reviews of Beth Phoenix, Kelly Kelly or Michelle McCool).

I can only assume Mattel went this route due to the enormity of Yokozuna's buttocks. The chest joint has a decent amount of front and back motion, at least as much as other super-heavyweights in the line, and even has a bit of side to side wiggle. The rest of the joints are standard for the line and inspite of having a giant ass, the figure has decent poseability in the legs.

Yokozuna's height seems appropriate, but may be just a bit too tall. He's not as tall as the Undertaker, however he should be just a little shorter. His massive size translates well into an imposing figure.

Look at him next to the very average-sized Daniel Bryan. Yokozuna looks like he could eat him! That's exactly what you want out of a Yoko action figure. 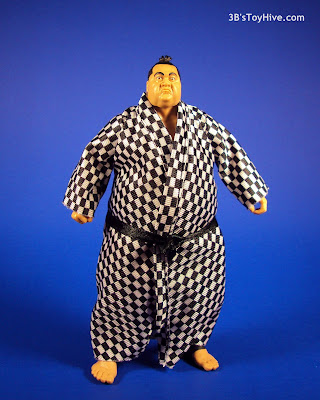 Yokozuna is packaged with ONE accessory: his entrance robe. It's made of cloth and has a separate removable belt. Short of a pack-in Mr. Fuji, I don't know what other accessory I need for Yokozuna figure. I guess there's always a Japanese flag, but I'm not really interested in that after the two flags Mattel's already released in the line (U.S. with "Hacksaw" Jim Duggan and Canadian with Bret "the Hitman" Hart). The look great on display, but storing them leads to them getting all bent up and crinkled. So I can do without any more of those. Back to the robe, the quality is very good, but there were some issues with it.

My figure has dark stains all over his arms caused by the robe, which he is wearing in package. Considering this is a wave SIXTEEN figure, there really isn't any excuse for this issue. I know the problem has been much more prevalent with red cloth accessories, but a few other figures with differently colored clothing have had problems, too. This is probably the worst case I've dealt with.

I think I can get him cleaned up with some rubbing alcohol, but I'm not so sure what to do with the robe. I've contemplated washing some of these cloth costume accessories in an attempt to let them bleed out. I haven't tried it, yet, however I'll have to come up with some solution to avoid having stained figures on the display. When not on display, I store the figures without the cloth elements and keep those in a separate zip-lock bag to avoid any staining. 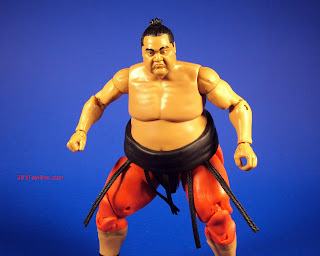 Yokozuna is an overall solid entry in the line and literally expands your WWE Legends collection. He may not be as tall as Andre the Giant, but he's no doubt the biggest figure in the line! I'm really happy to see Mattel continue to deliver the Superstars of yesterday in the Elite line because it saves us the trouble of dealing with Digital River. It's also nice to see them invest in new tooling to deliver some of the more unique bodystyles.

Aside from the issues with the robe, the only problem I have with this figure is availability. It's seems to be harder to find Elite figures on the pegs. My local Toys R Us stores are only stocking their exclusive "Best of PPV" Elites, while Targets in my area are sitting on wave 13 figures. Walmart is the only big retailer in my area that still seems to bring in new waves of Elites and even then it's only a case or two, tops. That may not bode well for upcoming Flashback figures like Diesel/Kevin Nash, Mankind and Miss Elizabeth.

I'll consider it a fair-warning that I should not hold off on buying a figure I want if I see it at the store. There's always Mattel Toy Shop, but I usually check it the day after they sell out of new items. And if I become truly desperate, I can turn to that other webstore...