I thought I picked up a lot of stuff last week... This week's pot swelled rapidly thanks to a Halloween blowout sale, a long-awaited preorder and WWE Elite 17 finally (FINALLY!) hitting my area. Click through to read this week's breakdown and get a preview of what I'll be reviewing in the next couple of weeks! 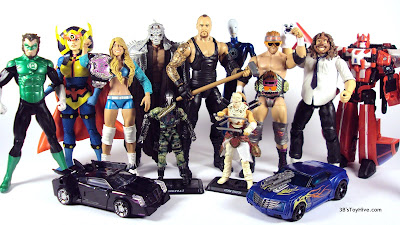 I spent all of last weekend sick at home, but Sunday afternoon I felt slightly better and decided to take the roughly 45min drive North to Tate's Comics in Lauderhill, FL for their annual Halloween sale. 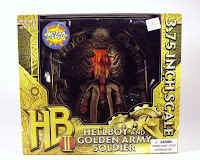 This year the sale came the weekend after the ghoulish holiday. A staple of the event is a huge tent set-up in the parking lot with big discounts on comics, graphic novels, import DVDs, statues and toys. This year toys under the tent were 2 for $10. That's where I found DC Direct's Arkkis, Saint Walker & Big Barda plus a Twilight figure for my girlfriend. Each of those were originally priced between $15-20. On my way to the checkout line I stumbled upon a sweet 3.75" HellBoy versus Golden Army soldier box set reduced from $30 to just ten bucks! I don't remember seeing 4" HB figures at retail, but I don't think there were many anyway. The detail on these is great, though, and I'm glad I grabbed them. 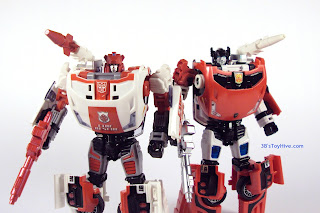 The first of two accessory kits was Beezleboss' latest "Heroic Duo" upgrades for classics Red Alert and Sideswipe. I mentioned last week that the set arrived from Big Bad Toy Store missing Red Alert's shoulder missile. Well, BBTS shipped the missing piece to me right away and Red got his makeover! I'll have a closer look at the whole kit coming up this week.

In official Transformers pickups, I grabbed another Vehicon expanding my squad to three nameless Decepticon troopers. But the biggest Transformer (and toy) of the week was the BBTS & Amazon-exclusive "G2" redeco of Fall of Cybertron Bruticus, which if you don't already know, is a modern COMBINER made up of five Deluxe-class figures. 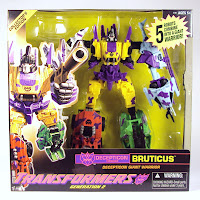 I'll admit that a lot of my excitment for FoC Bruticus waned once pictures started popping up online. With his crazy colors and lanky proportions he looked downright goofy! I decided to skip the SDCC version (not entirely by choice since he sold out fast), but opted to give this G2 version a chance when it came up for preorder.

I placed my initial preoder at Amazon, but later cancelled it due to a lot of mixed reviews on the FoC toys. After I picked up FoC Shockwave last month, I decided (again) to give Bruticus a shot. Amazon had long sold out, but BBTS still had him available to I ordered him and shipped my "pile of loot" a few days later.

The deco holds a special place in my nostalgia gland, but overall the figure(s) isn't bad. He's not great by any stretch, but I can live with him as my "classics" Bruticus. If you're familiar with the Power Core Combiners this is pretty much an upscaled version of those, vastly better, but still lacking some articulation. I'm planning to review him soon, so I'll go into more detail on him then.

Along with Bruticus came Hot Shot from the Transformers Prime series and Blades from the Universe line. Hot Shot is a redeco of "Robots in Disguise" Bumblebee with a new head. He's... alright.

Blades is a nicely sized, if simplistic, Transformer that is the first of my classics Protectobots. When the Generations Hot Spot was announced, I scoffed at the idea of non-combining versions of the team, but then I saw more pics and Ewan delivered a great review at Chase Variant that got me thinking about how these two would look together. Then pictures surfaced of the next upgrade kit by Beezleboss: a set for Prime Ratchet that will turn him into an IDW-inspired First Aid! So now Hot Spot is definitely on my radar. 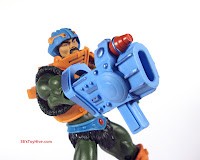 Red Alert & Sideswipe weren't the only figures getting some much needed weapon upgrades thanks to the arrival of the latest Masters of the Universe Classics "Weapons Pak", aptly titled Great Unrest.

My whole reason for buying the set was to get the big-ass arm cannon for Man-at-Arms and it did not disappoint! This weapon wasn't something I was aware of since I didn't follow the 200X cartoon, but after seeing it felt it would look great on my MAA figure. I know it's really intended as an add-on to the "snake" version of the character with it's more tech look, but I don't have that one and I think it works out well on the plain figure, too.

There seemed to be some anticipation for the Keldor swords, but judging by the fact the Great Unrest Pak is still available online, it seems this was one of those "all bark, no bite" things by the MotU diehards. I planned to sell this one off along with the rest of the Pak to recoup my cost, but the swords actually turned out rather cool even if I don't have Keldor. I think I may just keep'em for Skelz.

On the heels of last week's WWE score came three new additions from Elite series 17 which is starting to hit TRUs & Walmarts in my area. I found Kelly Kelly and Ryder at my local WM where the whole series was on the pegs minus Mankind. I found him at a TRU Express near my mom's place in the city of Miami proper. I walked into the store on a whim because we had a little family gathering at her place and I had run out to get a few items at the grocery store. I figured I should check it out since I was within walking distance, lo and behold, there was series 17 hanging on the back wall. I shuffled through the boxes quickly and nearly shouted "SCORE!" out loud when I found Mrs. Foley baby-boy.

TRU have a pretty good deal going on right now where you can get the free WrestleMania 28 Undertaker figure with any WWE toy purchase of $30 or more. I took advantage of that this week and picked up WM27 Triple H and said Undertaker so he will be one of the prizes in this year's "Christmas Comes Early" contest. Contest rules will be announced soon, so make sure to sign up for the newsletter!

Rounding out the new arrivals were a couple more G.I. Joe "Pursuit of Cobra" figures including the awesome Jungle B.A.T.! He and Storm Shadow boosted the Cobra troops and will serve the Cobra Commander I picked up a couple of weeks ago. 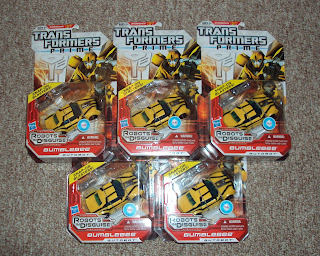 The last part of my haul this week came along with the BBTS order. Five Bumblebee figures from the TF Prime line. Why? A few weeks back some of the guys in the Repro Labels group on Facebook thought it would be great idea to take advantage of the clearance sale at BBTS and snap up some Bees for "Toys for Tots" or other charities, simultaneously introducing Transformers to a younger generation. Seemed cool to me and I felt bad about not donating anything last year so I ordered these at $5 a piece to drop off at my local TRU's Tots bin.

They still have Prime Bumblebee in-stock, along with a few other Prime figures, but there are lots of different items availble, too. Some of the Dark of the Moon Cyberverse figures are as low as $3! If you're looking for the most bang-for-your-donating-dollars you should take a look and spread the joy of Christmas to those less fortunate.

That's it for this week's Honeypot. Next week I'm focusing on writing reviews as I think I've hunted down everything I wanted, well, I may still keep looking for Diesel.