What's that saying about "the best laid plans"? After a steady stream of posts over the past couple of weeks I was derailed by some internet issues, procrastination and toy-hunting!

This week I hoped to pick-up some hard-to-find figures before the Thanksgiving/Black Friday holiday shopping rush starts next week and I was quite successful! New additions from WWE and Transformers plus I finally found some of those damned Dollar General G.I. Joes! 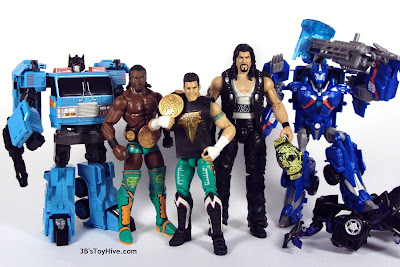 The hunt was uneventful until Wednesday when I ventured to nine different stores (3 TRUs, 3 Targets, 2 Kmarts and 2 Walmarts) in search of the other WWE Elite series 17 "flashback" figure, Diesel, which I eventually found at Walmart and "Generations" Hot Spot, among other things. I know that sounds like a lot, but all these particular stores are within a 10-15 mile radius. Plus it was my day off, so I had some free time.

During that outing I stumbled upon another Kevin Nash figure (which I picked up for a fellow toy blogger) and the hard-to-find Hot Wheels Curiosity rover at the downtown Kendall Target (stop #3).

It was at my sixth stop, a Walmart, that I finally found Diesel. I grabbed him and continued on my route in hopes of finding Hot Spot at TRU. Nada. I decided to check the two Kmart stores on my way home from that TRU. Nothing at the first, but at the second I found Prime figures "on sale" for $14.99 and thought that I could round out my Vehicon with a fourth member. I also grabbed Evan Bourne who's series 15 figure looks really nice and includes the modern WWE Tag title. Of course, after grabbing Bourne I kicked myself for passing E17 Kofi who I'd seen when I purchased Kelly Kelly and Zack Ryder last week. Needless to say, he was no longer at that Walmart when I checked.

On Thursday I knew I was going to spend several hours in front of my computer on a non-fun activity, so I decided to take some time in the morning to explore the stores to the South of me. No luck at the WM, Target or TRU on the South end. I took the long way back home and decided to stop at Dollar General in case their exclusive Joe figures turned up. I checked that store several times over the past four months or so, but hadn't visited in about a month. Well, they actually had some in-stock this time. I found Duke, Snake Eyes and Cobra Commander, but only picked up the first two.

These are nice, but I was really looking for Shipwreck. That being the case, if anyone is interested in trading a DG Shipwreck for either of these two, e-mail me! I'm only looking for a figure-for-figure trade, so don't ask me for money. I can turn to eBay for that. ;)

After dropping off my daughter at school Friday morning I trekked towards the U.S. Post Office to drop off the ten-pound box I incased Mattel's Voltron in. My local office decided to change their working hours, so I wasn't able to leave the package there. I headed to the Walmart a few miles to the North where I had to make a couple of returns. I glanced at the toy aisle, but there was nothing new so I drove across the street to Aldi Food Market, where Seibertron.com reported Prime figures were on sale for $9.99!

That was the first time I ever walked into one of those stores and it was... odd. I don't know if I'd ever buy food there, but I did locate the toy section which had a small box of Prime figures. Nothing I didn't already have and no sign of Vehicons (I kept the receipts from the last two in case I found some cheaper).

I started for the next post office on my way home. I arrived there and after a short wait, parted ways with Sucktron. Continuing on my route I stopped at TRU where I picked up another Christmas gift for my daughter and was happy to find Protectobot Hot Spot in all his baby-blue glory!

There was one case on the shelf (1 HS, 1 Powerdive and 2, very fugly Megatrons) and Hot Spot was right upfront, seemingly waiting for me to buy him. These must have just been put out because the clerk at the cash register mentioned he had never seen him before and I know this was the first time they've had any Generations GDO Voyagers in. While there I also picked up another prize for this year's contest (more on that in a minute).

On the final stretch home I stopped at my local Target in the event they had Kofi. Nope. But they did have the latest wave of Prime Voyagers which includes Ultra Magnus! I picked him up and whispered "... about time" to myself. Headed towards the check out with UM in hand, then headed home.

Giving up on locating the other half of "Air Boom", I snapped the group pic for this week's haul before I had to leave the house for dinner at my Mom's place.

At Mom's I had a while before dinner would be ready, so I took a walk over to the recently set-up TRU Express, same place I found Mankind a week and a half ago. There I located Kofi and snapped him up rightaway. Arriving home after a long day, I set-up the photo stuff again and revised the groupshot.

So that was the Honeypot for this week and I'm very happy to have found nearly all the stuff I've been looking for at retail. Up next: a well-deserved reprieve for my wallet. I have a couple of pre-orders coming in over the next few weeks, but nothing else I'm really looking for in-stores until WWE Elite series 18 & 19.

Next week you can expect reviews for Mankind, Zack Ryder, the Undertaker and maybe one more before the full contest announcement on Thanksgiving Day!

If you haven't already done it, make sure to sign up for the Hive's Email Newsletter! It's the best way to keep up with any new content including details on how you can win a free action figure in the "Christmas comes early" contest!