It's been nearly three weeks since my last Honeypot post, but I kept track of my purchases and this week it's back with triple the goods! The first two weeks started off light with some nice surprises at my local Toys-R-Us & CVS, along with the completion of a long-gestating project and an unlikely accessory for my Marvel Universe collection.

The third week was dominated by WWE exclusives from Ringside Collectibles. These were part of the single largest purchase I made all month and delivered some highly-anticipated figures. So let's get to the weekly breakdowns and see what the Hive hauled in! 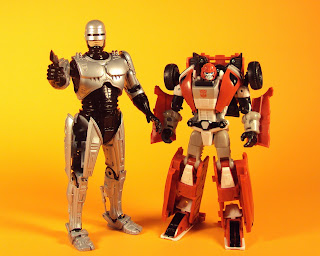 Robots dominated week 1, but they weren't all Transformers. During a weekly visit to my local TRU I was greeted by the arrival of the Deluxe figures from the GDO series. There were only two Deluxes I wanted from this wave and I already had one of them (Wheelie), so I grabbed Swerve (review is linked above).

Perusing the aisles some more I found the long-awaited, spring-loaded holster version of RoboCop by NECA. And he was only $14.99! That's cheaper than the first release with the none-holster leg. I don't know how that makes sense, but as far as I can figure NECA wanted this one to sell and entice collectors who already had the first release (like me). If you missed the first release, don't worry, this one includes the same accessories (gun and alternate "data-spike" hand) with the added bonus of the leg holster. It functions simply and looks great open or closed. A must-have for any RoboCop fan. 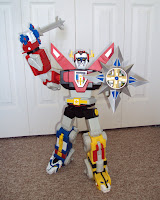 Putting a cap on week 1 was Mattel's Black Lion and Keith set which arrived as part of their Club Lion Force subscription. Now I've only reviewed two of the sets (Lance & the Red Lion and Yellow Lion with Hunk) and I doubt I'll review the rest. This whole thing turned out to be a massive disappointment and I've already listed the whole set on eBay in the hopes of making back the money I've spent on it (including shipping) and freeing up the space this monstrosity takes up.

The sad thing is that he looks pretty awesome when combined, but unless you have him in a very static (and boring) pose, he's way too unstable. The individual lions are crap because of the articulation they lose due to the spring-loaded gimmick (awesome on RoboCop, bad on lions... funny how that works). If you have the time and are truly interested, I recommend you watch this video by Collection DX which mostly lines up with my views on the toy and dealing with Digital River. 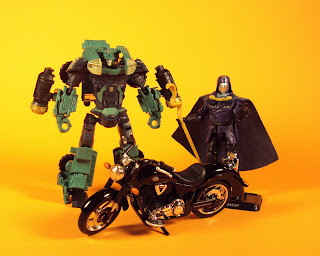 Week 2 was the lead-in to my trip to Epcot, so there wasn't a lot of stuff that came in, but a few nice finds anyway. My local Target restocked the Transformers Prime section with more Deluxe figures, this time adding the figures with the pack-in DVDs and an extra $1.50 in anticipation of another price increase. They had Kup and a couple of Vehicons among more Bumblebees and Hot Shots. I decided to give Kup a try after reading several mostly positive reviews, but I contemplated increasing my Vehicon ranks from two to four. I ultimately decided that $16.50 per figure was too much to pay at the time and only took Kup. In hindsight, I probably should have taken the troopers. Kup's cool and all, but he's not $17+ cool. It seems the longer the Prime RID figures go, the less impressive they are. I used a gold Sharpie on Kup's weapons because Hasbro cut out the paint app pictured on the back of his card. So prices keep going up, figures keep getting smaller and now they're cutting back painted details, too. Ugh.

I've been looking at these super-detailed, 1:18 scale motorcycles at Walmart and Target for awhile now, thinking it would be great to have one for Marvel Universe Wolverine. Then I realized the Marvel character that needs a bike the most is Ghost Rider! Seriously, how does Hasbro release a Ghost Rider figure without a motorcycle?! Anyway, I picked up this beauty at Target along with Kup and it scales great with MU Rider. The only thing missing are the flaming wheels, but I wasn't sure how I'd make that happen. Either way, it still looks nice on display.

Week 2 pickups ended with my acquisition of Cobra Commander from the "Pursuit of Cobra" line. I found this guy at my local CVS, the same one where I picked up Firefly a few weeks back. There were actually two of them on the peg! It's a great update to CC and I like him better than the Retaliation version I picked up in early Summer. I have to remember to keep checking there because I still need "Money Bags" Destro! 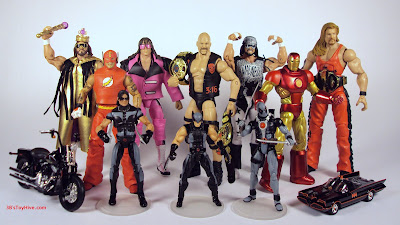 And finally we arrive at week 3 and for those of you concerned about my interest in wrestling figures, rest assured it is still very much alive! Prior to leaving on my trip I ordered no less than FIVE exclusive WWE figures from Ringside Collectibles, which were waiting for me at home when I returned from Orlando. The order was spearheaded by the newly released "Bionic Redneck" version of Stone Cold Steve Austin. Aside from the new head sculpt and decos on his vest, the main appeal of this figure is the inclusion of Austin's custom "Smoking Skull" belt and the rounded WWE Championship used during the "Attitude" era in the late '90s, which as you may remember I am partial to.

After waiting for the preorder on Beezleboss' latest custom kit to come, I shipped the "Pile of Loot" I had sitting at BBTS for over a month which included the newest Marvel Legends Iron Man, '66 Batmobile (1:50) and MU X-Force team pack. Ironically, the Beezleboss kit was missing a piece, hence why it's not listed or pictured. There's a replacement enroute so it should be here in time for next week's Honeypot.

I picked up another 1:18 scale motorcyle, this time at Walmart who apparently sells Harley Davidson die-cast cycles exclusively, although they are made by Maisto just like the Victory cycle I previously bought. I think this one has a slightly better look for Ghost Rider given his affinity for the high handlebars, but I actually prefer the Victory.

And finally, yesterday I made a run to the Dadeland Station Target where I was pleased to see WWE Elite series 16 figures in-stock. Shuffling through the figures I found "Big Sexy", Kevin Nash sporting his red "Outsiders" gear and carrying the nWo painted title belt. I definitely wanted to add this figure to my collection (particularly because of DDP and nWo Macho Man), but was more interested in Nash's WWE alter ego, Diesel. However, it seems this is either the more popular version or the rarer figure because Diesel is listed at $50 on RSC while Nash is $80(!). I don't like either figure enough to pay either of those prices, so I'm ecstatic to have found one at retail. Hopefully, "Big Daddy Cool" won't be far behind.

After that find, I crosed US 1 to the Pinecrest TRU where they restocked more 2010 G.I. Joe figures and had a BOGO 50% off sale. No sign of MB Destro, but I did find "jungle" Duke and Zartan. After reading fantastic reviews of each one (Duke at Chase Variant and Zartan at MTV Geek!) I knew this was a deal I couldn't pass up.

The same TRU restocked the current MU wave and I was finally able to buy Kang... Wow, after reading that last sentence back, I realized just how boring Kang is. Anyway, plenty of stuff coming in next week including a rather "brutish" Transformer.