CM Punk, Kane, Macho Man and Stone Cold Steve Austin have all received the "exclusive" treatment from Mattel via Ringside Collectibles and for the most part they've all been great releases. Today I'm looking at another one of RSC's 2012 WWE exclusives, Bret "the Hit Man" Hart, appearing in his all-pink attire from the 1993 Royal Rumble pay-per-view event.

There are really two important aspects to any of these WWE exclusives: (1)paint decos and (2)accessories. We rarely see new figure sculpts, although there is the occasional new head scan, but for the most part they reuse a previous release and only focus on a new deco and accessories. The "pink and black attack" version of Hart reuses the "Defining Moments" figure as a base. It does really well in one category, but suffers in the other. Find out which one after the jump!

I'll start with a look at the Hit Man's accessories, which is the weaker of the two categories I mentioned before. First is Bret's "signature" pink jacket. It's not horrible, but it's a molded jacket so you lose all arm articulation when he's wearing it. That wouldn't be such a big deal if the static pose didn't seem so unnatural. The odd arm position didn't bother me much on the first Elite Undertaker, it fit his character, but it didn't look right on Edge's Elite figures (series 8 & series 13) or Finlay's, and it doesn't quite look right on Bret, either.

Aside from that the sculpt and paint combine to deliver a nicely detailed version of Hart's entrance attire. Sure a fabric jacket would have worked better, but I understand if that didn't "cost out" at this scale. Plus, I don't know how the designers would have made the dangly chains on the shoulders work any other way. The jacket closes on the front with the use of two flat pegs, but getting it on the figure requires some patience because you have to basically fold the jacket back to work both the arms in.

P&B Hit Man's second accessory is the Hit Man's token visor-like sunglasses. For this release Mattel reused the DM mold of the glasses, this time molded in pink plastic instead of black (which I think is a better idea), but left out the reflective lens sticker. What we end up with is a completely opaque pair of sunglasses.

Yeah, I know, the others weren't transparent either, but the reflective sticker at least made it look like they could be see-through. Ideally they would have added the sticker to this pair and deliver a much more authentic version of the glasses, surpassing the previous figure's set. 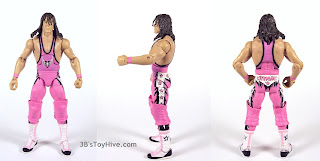 After removing the jacket and sunglasses we have essentially the same figure as the DM release. The sculpt works for Bret, but what's missing becomes immediately obvious: elbow pads. He's not wearing any and there aren't any stored in the box, either. WTF, Mattel?! This figure is based on Hart's main-event appearance at the 1993 Royal Rumble and you can clearly see he wore elbow pads (as he usually did) during the match.

This version DOES receive a pair of knee pads, but the designer's choice to use the large, cumbersome pads was a bad one. While Bret Hart certainly wore those types of knee pads at different points in his career, the ones he wore at the event were smaller and didn't cover up as much of the tights' design. I don't understand why Mattel didn't just use the mid-size pads they already have, I doubt they're tied to any specific body mold.

I'm thinking he'll look way nicer on display without the knee pads or maybe I'll just trim them down a bit when I have some free time.

The whole debacle with the accessories is a shame because the deco on the figure is fantastic! His torso and legs are molded in vibrant pink plastic and paint is used on his wrists, torso and on his legs. The details are sharp on his white & black flame designs with sharp points on the stars down the sides of each leg. "HITMAN" is printed crisply on his buttocks and the skull/wings logo on his abdomen is perfect. I can't be sure about the apps under the knee pads, but I didn't encounter any quality control issues on the my figure.

He's still sporting his two-tone boots with pink trim, but this release features a thick black outline on the stars instead of the double, thin-lined outline from the DM version. 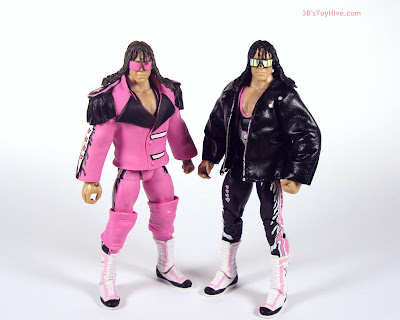 The other notable missing accessory on this release is a "winged eagle" WWE championship belt. Bret Hart defended the WWE title against Razor Ramon at Royal Rumble '93, yet the figure doesn't include the belt. Ironically, the DM figure includes that title although he wasn't the champion (nor competing for it) at the event the DM figure is based on. Weird. I think Mattel didn't add it because it wouldn't be able to fit under the jacket. That and I'm sure the paint apps on Hart's figures isn't cheap.

I have mixed feelings on this release, so it's a tough one to call. If you're a Bret Hart fan you should be happy with this figure, doubly if you already have the Defining Moments and are able to mix-and-match accessories. The paint deco goes a long way to making this a worthy purchase and at $26, he's only about six dollars more than Elites at retail. The lack of elbow pads and wrong knee pads is frustrating and I hope it's not a trend Mattel is leaning towards. We can debate whether or not Kevin Nash's figure needed an elbow pad (I feel he did), but there's no debating the matter with the Excellence of Execution. He definitely needed to have them.

If Mattel's planning to do that as a cost-saving measure, they better look into resculpting some limbs with pads already on them. I understand rising prices and all that, but this line is billed as "highly-detailed, authentic ring gear". They need to make sure to keep it that way.

As far as future Bret Hart figures go, and I'm talking about classic Bret, not modern-day t-shirt & jean shorts Bret, I could see Mattel kit bashing a new Flashback figure using the upper body from the DM figure and the P&B figure's lower body, or vice versa. Then just remold the jacket to make the black version of this garment. And, yes, it is differnt from the biker-style DM jacket.

That's alright, but I'd prefer a new Legends two-pack with Jim "The Anvil" Neidhart and Bret in their classic "Hart Foundation" outfits. 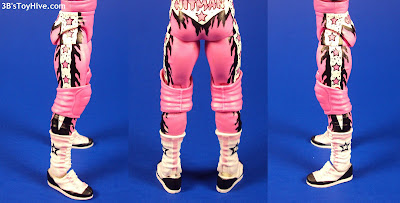 I wasn't happy with the bulky knee pads on this release, but having a tough time finding smaller, pink pads and wanting to avoid painting, I decided to just trim down the pads instead. It was a simple procedure, I heated the boots and pads in order to remove them, then trimmed the top and bottom portion of each pad using a small fingernail scissors. Heated them up again and put them back on and now the figure has better range of motion in the knees and the pads cover less of the design on the tights.

The other changes I made were removing the reflective sticker from the Defining Moments figure and placing it on this figure's pink visor, bringing the accessory closer to the real thing.

Since I don't display both Hart figures at the same time, they can share the sunglasses, same goes for the elbow pads. I like the smaller square elbow pads for Hart as opposed to the slightly longer type the DM figure included.

While you can fit his arms into the pink jacket while wearing the pads, I don't recommend it because the get pushed up above his elbows and are stretched out. It's easier to just remove the pads before putting the jacket on. And like the sunglasses, both figures can share one pair of pads.

Trimming the larger knee pads makes them about the same length as the medium-sized pads I placed on the DM figure. Hart wore different types of pads throughout his carreer and depending on his outfit, so these don't look out of place. It's a simple solution that improves the figure.
Posted by 3B at 9:35 AM