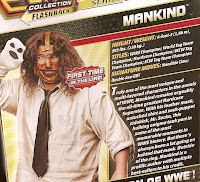 Finally, Mankind has arrived. I've eagerly anticipated this figure since Mattel first announced they picked up the WWE license! That was at the tail-end of 2009! Fast-forward a few years and Mankind (and Mick Foley for that matter) makes his first appearance in Mattel's WWE lines via a Legends-styled "Flashback" figure in the Elite Collection series. Although the figure was inevitable, I wasn't sure how Mattel would execute it. What version of Mankind would it be? Would he have a removable mask? Would he include Mr. Socko? Did I even want a Mr. Socko? 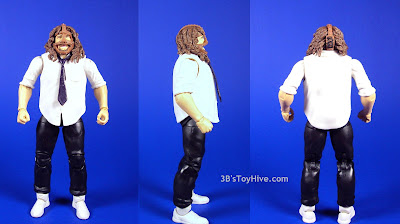 Mattel went with arguably the most popular version of Mankind as he appeared near the end of his in-ring career in the WWE. He's in his mock-Corporate look with the untucked shirt and loose tie, but now sporting sweatpants instead of the tights the original Mankind costume featured. I'm fine with the choice, but I would have accepted a version based on his infamous 1998 King of the Ring appearance where he and the Undertaker (but mostly Mankind) delivered what is probably the most memorable "Hell in a Cell" match ever. On a side note, I think it's about time Mattel released that version of the Undertaker, too.

Mattel needed to tool quite a few new parts in order to deliver Mankind to us. He has a new head, obviously, but also new arms and legs. Let's take a look at his head and the first of his two accessories, his mask.

The head is composed of two pieces with Foley's hair being a separate, soft plastic piece that's glued to the top. The hair was sculpted in such a way as to allow for the mask to be removed easily.

As you can see the mask is missing sections of the various straps that anchor it to Mick's face. The sculpting is very nice and the design team captured it's bizarre asymmetry perfectly. The incomplete straps have just enough length to fit under his hair creating the illusion of full straps hidden under Mankind's untamed mane. 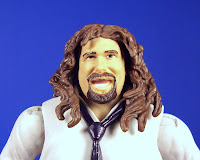 With the mask off you get a good look at the crazy, excited, jovially violent smile on display. You can't help but smile when you look at the figure. He just seems so eager to dole out punishment on himself as much as on his opponent! The hair also manages to look mostly normal with the mask off except for the back where it's oddly parted, but unless you plan on posing him backwards, it shouldn't be a problem.

It's difficult to see because of the hair, but Mattel even sculpted his right ear missing a section near the top. That's a nice touch! Most of Mankind's paint is concentrated on his head and mask and it's done very well. The designer's used black paint to cover up a tooth, making him look like he's missing one. It's actually a little wide, so he kind of looks like he's missing both his upper front teeth. Wait, maybe he actually is missing that many?

I think Mankind reuses the "Hacksaw" Jim Duggan torso, but it's hard to tell because his shirt is it's own rubber piece without any closures so removing it would require decapitating the toy and possibly removing the arms. I'm not prepared to do that, so we're left to wonder.

The sculpt on the shirt looks nice, appropriately wrinkled with buttons and a pocket over the left breast. The neck tie is a separate piece glued in place. The rest of the sculpt offers up some new articulation for the line and we'll cover it in next section. 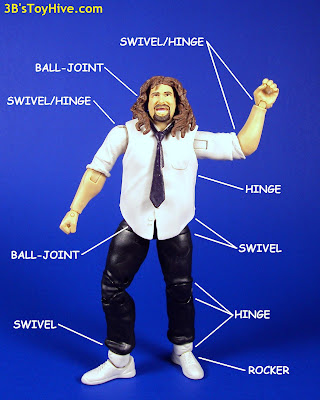 Mankind's upper arms are one piece, but still retain the familiar swivel & hinge shoulders. Instead of swivels at the biceps, he has swivel/hinge elbows which allow for the same range of motion plus eliminates the peg holes at that joint. The rest of his movement is the usual model we've become accustomed to, but he does trade-in the boot swivels for cuts at the top of the feet like John Cena's figures. Sneaker swivels, if you will.

We already covered Mankind's main accessory, so let's move on to his second, Mr. Socko. I'm not sure how to classify it. Is it a prop? Is it a weapon?

I don't know, but it turned out great! Sure it's just a simple piece of cloth with a crappy face painted on it, but that's exactly what Socko was. I don't know what was worse, the fact that "Socko" was (implied to be) made from Mick Foley's used sock or that he had him tucked into his pants during matches prior to shoving him into someone's mouth. Either way it was bad news for whoever was facing Mankind that night.

I'd rather be tossed off the Cell and crash through the Spanish announce table. 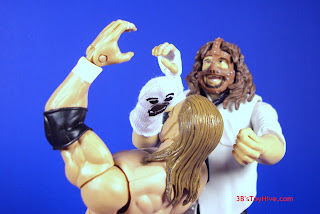 When Mankind debuted in the (then-)WWF I was truly freaked out by his appearance and twisted vignettes. He was the kind of heel I hated and that made me want to watch him get his ass kicked! Brilliant! Most of the time, however, he managed to apply his "mandible claw" manuever to his opponents and win. Later, when the veil around "Mankind" was pulled back and we were introduced to Mick Foley and his various wrestling personas, he became a wrestler I truly admired and Mankind's "gimmick" was toned down a bit. He was still deranged and sadistic, but he showed more of a fun side which endeared him to many more fans.

Mattel managed to hit a homerun with Mankind and he is a must-have for any Mick Foley fan or WWE figure collector. I most certainly recommend him! The only thing that would have put him over the top is the inclusion of the Hardcore Title belt, but maybe they're saving that for a rainy day. 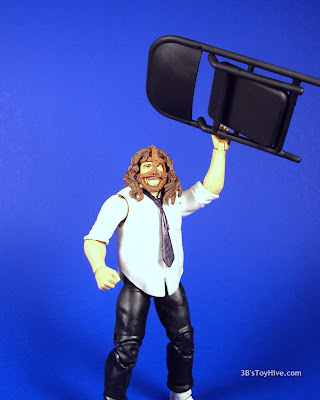 Now I'm left to wonder if we'll ever see the other two thirds of the "3 Faces of Foley" as Elite Flashbacks. Dude Love is silly enough to be a great addition to my collection, but I think Mattel should certainly look into a new Legends two-pack featuring Mick as Cactus Jack and a "Funk U" version of Terry Funk.