But that's not the thing that sold me on this exclusive. No, sir. This version of Austin also includes his trademark "Smoking Skull" championship belt along with the "Attitude" era WWE title. Those two belts were enough to bump this latest Stone Cold figure into the "must-have" category. 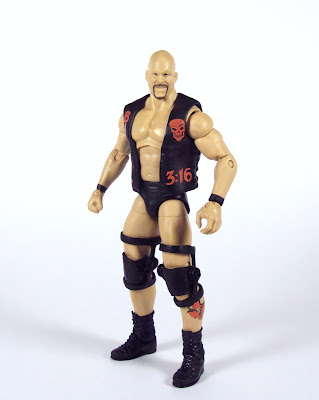 The only thing we have to address sculpt-wise with the RSC Austin figure is the new head scan. Below the neck he's the exact same figure we saw in the WWE All-Stars series. I will note that Mattel's still shipping him out with the wrong kneepads. He should be wearing the closed back pads, like the ones packaged with The Rock, who oddly should be wearing the pads we see on Austin, here. I have the series 14 Rocky, so I'll swap the pads with this Austin as soon as I have the chance.

The new head sculpt (I say "new" because it hasn't appeared on other Elite-level SCSA figures, not sure about the Basic line, though) features the Texas Rattlesnake with a rarely seen smirk on his face. Sure, it's a bit out-of-character, but he did on occasion give a smirk or smile... mainly when he just finished opening a can of whoop-ass on Vince McMahon. Still, it's nice that they did something to differentiate this figure from retail releases a bit more.

The likeness is pretty good. What I've noticed, though, is that it can look kind of strange from certain angles and depending on the lighting. I think tilting his chin down and having some side-lighting improves it. 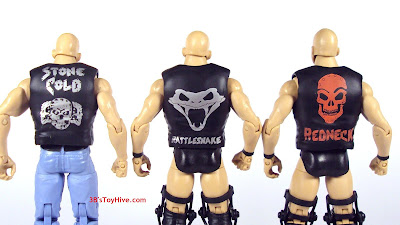 The vest is the same mold we've seen on Austin's previous Legends and All-Stars releases (also included with Diamond Dallas Page). It gets the job done, if a bit tighter than what Austin normally wore.

Of course, the main difference with this release is the red logos and lettering that replaces the more common silver. The decos are simply tampographed on the vest and, when you look closesly, you can make out small circles around each image, imitating the studs on the actual vest.

The familiar Stone Cold skull logo appears on the back and the left breast. "3:16" is featured on the lower left side and the phrase "Bionic Redneck" (alluding to Austin's multiple reconstructive surgeries) is split between the front right side of the vest and on the back under the large skull logo. The tampos on my vest are excellent with only a few spots where the black vest shows through just a little.

A new head and vest is all fine and dandy, but let's get to the nitty gritty of this release: the title belts! Bionic Austin debuts two new championship belts for the Elite line. First up is the revised WWE title belt that replaced the old "winged eagle" title we've seen on Bret Hart in the "Defining Moments" line and Legends' Andre the Giant. The "Attitude-era" belt features a larger center medallion, that is completely round instead of having a protruding eagle like the former title.

One of my collecting "holy grails" since I was a teenager was to own a life-size WWE replica belt. When I finally came to a point where I could purchase one, I debated between a couple of versions, but ultimately I chose this version of the title due to my connection to that era of the WWE. It's one of my most prized possessions and I couldn't wait to have it in action figure size. I think it looks great, capturing all the detail of the life-size belt.

As if that wasn't enough, this version of Austin also includes he's custom "Smoking Skull" championship belt. It came about as part of Austin's disdain for McMahon and his corporate attitude. I think before Stone Cold's SS belt the most recognizable "custom" belt was the Million Dollar Man's "Million Dollar Title" which was emblazoned with dollar signs sculpted in gold and diamonds. Sure, Ultimate Warrior had several versions of the winged eagle belt, but all they had were colored straps.

Just like the Attitude title, Mattel started with a brand new strap mold to house the more oval shape of the Smoking Skull's center medallion. Likewise the the smaller medallions, which feature a semi-badge shape, are new to the line. It's kind of difficult to make out some of the details on the center plate, but it seems to be all there. The larger details are painted like the skull's eyeholes, nosehole and mouth, clearly defining each tooth. The background on the "Heavyweight Champion" ribbon is also painted correctly and the WWE logo on the skull's forehead has the right tone of orangey-red. Mattel missed a few details like painting the WWE logos on the smaller medallions that kind of hurt the overall authenticity of the accessory, but that may have been asking for too much given how small the logos are and I much rather they appear unpainted than sloppy colored. The other detail missing is the inside of the strap, which should be white, however that would probably lead to more issues than it's worth, so I'm okay with that omission. 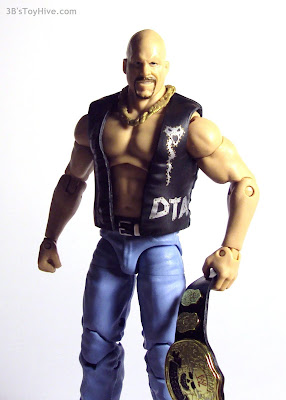 At this point I should note that this was one of the dirtiest Elite figures I've purchased to date. Austin's head was marred with dark stains all over the top and back. I don't know what caused this, but it's not very nice considering the "exclusive" price tag and the fact he doesn't have any cloth accessories in the package. Aside from that I did not encounter any quality control issues on my figure.

He's currently available from Ringside Collectibles for $29.99 (plus shipping, of course) and that's not too bad when you consider the current price of Elite figures at retail, often with less accessories. I ordered him along with 4 other RSC exclusives and a cheap UFC figure to bump me into the "15% off" category which basically translated to free shipping on my order. There are currently no plans to include either of these title belts with a future release, so if you're a SCSA or Attitude-era fan, this is a must-have addition to your collection. I'm happy with him and you can see already did some kitbashing for a different look.

Want more WWE Elite reviews? Don't stray to far as I'll be back Thursday with an all-new Elite figure review!