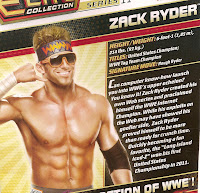 Woo woo woo! You know it!

Zack Ryder's second entry into Mattel's WWE Elite Collection is finally here and this time the "Long Island Iced Z" is carrying gold! Yep, the main Broski comes packaged with his custom "Internet Championship" title belt and it easily ranks as one of the best belt accessories in the line thus far. But does this revised version of Ryder have anything else going for him to make him worth a double-dip?

Ryder's Elite 9 figure turned out to be one of my favorites last year, but when the series 17 figure was revealed with 'net title in-hand, I knew I had to scoop it up. That meant I had to free up some space so I actually sold off my E9 Ryder figure a couple of months back.

The good news is that this version of ZR features sharper looking ring attire because even though I liked the crazy one-legged tights, the shorts make him look less clownish.

He's basically the same figure with a different head, bare right leg and laced boots. Paint apps once again play a prominent role in the creation of this Zack Ryder figure. The expression on his face looks kind of goofy when he isn't wearing his glasses, but with them on it's a great likeness to Ryder.

He has several different logos on various parts of his outfit. All of the logos on my figure were sharp and neatly applied on his lower torso, knee pads and boots, including the QR code under his right hip. 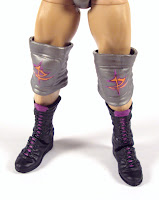 The boots, albeit the same sculpt seen on most modern Superstars, actually utilize some interesting paint apps. We've seen some intricate applications on some of the boots throughout the Elite & Legends lines, but I think this is the first time Mattel's done a figure where the tongues on the boot is painted. As you can see they're purple on Ryder's boots. That means they have to paint between the laces on each boot and that equates to a lot of impossibly small spaces to apply color to. Maybe it's a lot simpler than I imagine it to be, but they did it without any slop and that's what matters most!

Ironically it's the molded portions on Ryder that create some color inconsistencies. The skin tone on his torso (and upper thighs) is lighter and more pinkish than on his head, arms and legs. I don't know if this is true on all the figures, but it makes him look weird.

Elite 17 Ryder includes three accessories (five if you count his elbow pads), but the jewel of the set is the Internet Championship belt based on Zack's custom-made (and unofficial) title. It's made like all the other belts in the Elite/Legends lines: soft plastic for the strap with plastic inserts for each medallion. Mattel didn't cheap out, either, delivering vac-metal plates on the first appearance of the title in the line. The belt turned out really nice and mostly accurate to the real-life version. The main difference is that the smaller medallions are missing the logos for the various social media outlets an "Internet Champion" would conquer (i.e. Facebook, YouTube & Twitter). You can get a good look at Ryder's belt over here.

The funny thing is that the smaller medallion to the right of the center plate is supposed to feature the Broski's "Z" logo. Why didn't Mattel just include it on the toy?

Zack's other two accessories are his headband and sunglasses. This time around Mattel thought it best to include a removable headband instead of sculpting it on his head like the last figure.

The sunglasses border Macho Man goggle territory with a large, singular lense painted over the molded orage plastic. It's not as snug a fit as other sunglasses we've seen in the line before and will actually pop off his face easily. But I've had him posed on my shelf since I got him and the glasses are still on his head. 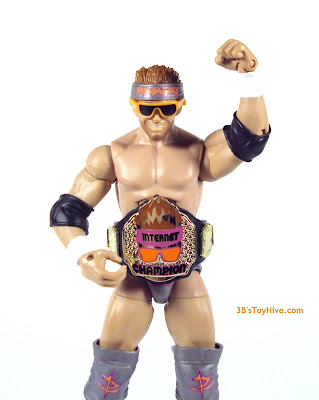 "Internet Champ" Zack Ryder is part of the latest wave of WWE Elite that includes Mankind, Kelly Kelly along with new versions of John Cena and Kofi Kingston. I picked up mine at Walmart for the now-standard $17 pre-tax price, but I've also spotted him at Target while stores like Kmart and TRU are working their way through series 16. Overall I'm happier to have this version of Zack on my shelf and his belt turned out really nice. I don't see myself buying another Ryder figure for a while because this one delivers everything I want in a "LIIZ" figure.

Now I just need to figure out a way to print out some Facebook/YouTube/Twitter logos and stick them on the belt.

Make sure to sign up for the Hive's newsletter and stay tuned for this year's contest announcement! Also, take a moment to check out the Collector DASH link at the top of the page. It's a great tool for keeping track of your action figure collection and you'll be entered for a chance to win great prizes in their giveaway!
Posted by 3B at 6:00 AM