Wow, another year down and it's been quite the year for toy collecting. There've been soaring highs and subterranean lows, but overall I think it was a great year for action figure enthusiasts and I was surprised by many of the lines I started collecting. I started 2012 with a list of my Toy Wishes and it was nice to see some of them come to fruition.

For the "Best of" list this year I added some categories and spread out brands over specific lines to include as many toys as possible while only covering things I've purchased over the past 365 days and that debuted in 2012.

So come now and see what my picks are for the best of the year!

Kicking things off is a look at the Third Party offerings, divided into two categories: accessories and figures. The 3rd Party accessories market was a crowded one with plenty of offerings from Dr. Wu, Renderform and Beezleboss. My pick for best of the year is Beezleboss' "Growing Pains" kit that turned our United Bumblebees into classics Goldbugs. Beautifully designed head and weapons (not pictured) showcased how great Beezleboss can be. 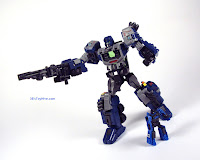 I wish I had purchased this figure upon the first release and already have him reviewed on the Hive. This is a perfect example of just how talented the team at FansProject is. Known primarily for their updates to classic G1 Transformers characters, FP released Steel Core out of nowhere, a figure not burdened by nostalgia, and redefined what a "Third Party" toy company can be. This is what I suspect Poe Ghostal was referring to when he recently concluded, in response to this article, that in the near future (most) action figures would become higher-end collectibles instead of going extinct outright.

Playing with Steel Core brings a smile to my face, he's just such a neat, awesomely constructed toy. He's a robot, he changes into a vehicle and his little pack-in robot (or is he the pack-in...?) can sit inside and pilot him. A truly FANtastic toy!

Perfect Effect was the company to finally release an updated version of Arcee worthy of rubbing shoulders with the likes of other updated season 3 characters like Generations Blurr and Wheelie, plus third party updates Rodimus Prime (FansProject's Protector armor), Ultra Magnus (FP's City Commander), and Springer (WarBot: Defender). Some QC issues held her back from being the best of the best, but she's a close second to Steel Core, beating out even WarBot: Assaulter in my book.

I only started collecting MU this past Summer, but Hasbro has released some truly fantastic figures, blowing away the poorly articulated toys from past years. Making his debut in the line this year was BRB, a character that equates to Thor with a horse skull for a head. I was never a fan of his, but the figure is tops and stood out to me as the best MU had to offer this year. No small feat considering other great figures like FF Spider-Man, Astonishing Beast and the runner-up...

Honorable Mention: Incredible Hulk (new)
The Incredible Hulk! This new version introduced a slightly smaller build with better articulation in his legs and an aesthetic that looked good with comic and movie figures alike.

Best of Transformers Prime: Vehicon (RID)
Hard to believe, but the nameless, sparkless, Decepticon troopers received the best figures in the TF Prime Robots in Disguise series! I can't believe I never got around to reviewing it this year, but I did manage to buy four six of them to fill out the Decepticon ranks. No other figure in the line looked as faithful to the TV show as these guys did in both vehicle AND robot modes. 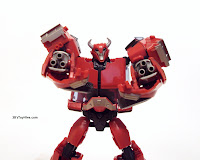 The only Prime figure to feature fully integrated weaponry, CJ makes the list this year because of how limited his initial release was in 2011. The "First Edition" molde was scrapped in favor of the puny "RID" version in 2012, but FE made a return eventually. FE 'Jumper was second only to the Vehicon as the best rendition of a Prime character. A very close third place would have been awarded to the Voyager-sized Ultra Magnus with a bot mode that imitates the brutal simplicity of his battle hammer!

While Hasbro keeps downsizing their Transformers, they managed to release a series of retooled/repainted "Reveal the Shield" and Generations figures that delivered big for fanboys. Hot Spot may not be one of my favorite characters, but the toy turned out great using the Universe Inferno/RTS Grapple mold to give us a sweet update on the G1 figure. Sure, he doesn't combine, but he looks so good standing alone, why would you want to mash'em up with other robots?

(Photo and review by SirDragonBane at Chase Variant)

The GDO series of Generations took our preconceived notions of what certain G1 characters are and turned them on their ears. A Protectobot that doesn't combine. A non-triple changer Springer. New versions of Swerve and Wheelie that AREN'T minibots. And you know what? They all still managed to sell.

Hasbro proved that "fanboys" can be open to new takes on existing characters and not over-analyze the fun out of these toys. Wheelie was my favorite GDO Gen figure until Hot Spot came along, but that doesn't make him any less fun. A creamy/cool color scheme, my favorite classics mold and a crazy slingshot/blaster weapon combined for an awesome release!

Best of WWE Elite Collection: R-Truth (E15)
This one really caught me by surprise. When thinking back to all the Elite figures I picked up this year all my favorites were "Flashbacks", so I decided to count those in the Legends category and re-examine the modern Superstars in the line.

I skipped the first two Elite R-Truth figures because I just didn't care for him much, but when the E15 version was revealed, I thought it was a great rendition. The crazed, wide-eyed stare. The lil' Jimmy-proof vest. The intricately-detailed paint apps on his pants. This figure stands out to me as the best in the Elite line this year for all those reasons. That says a lot considering Mattel gave us great new updates of John Cena, Kofi Kingston and Zack Ryder along with impressive debuts from Brodus Clay and...

Honorable Mention: Sin Cara (E18)
My runner-up pick is SC's second release featuring him in his white and gold attire. Masked figures lose a lot of expression in the face, moreso when the mask fully covers their head, but Sin Cara's kinetic costume design makes up for it. I'm not a fan of his debut blue attire, but white & gold create an elegant look that I couldn't resist! 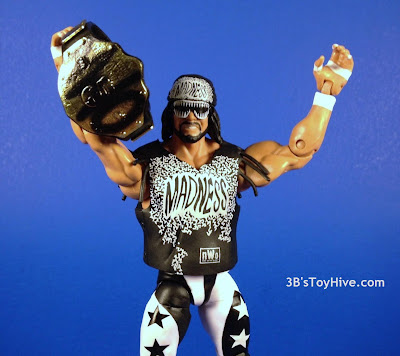 The "Legends" category was dominated by figures from the Elite "Flashback" subgroup although Mattel did manage to spit out five figures in the proper line. Only two of those motivated me enought to purchase from their dreaded "adult collector" website, but neither one made it as the best of the year.

The RSC-exclusive "NWO" Macho Man delivered an impressive level of paint detail using the what is usually the hardest color contrast for action figures (black and white) and new accessories to compliment those already established for Savage figures. He faced some stiff competition including fellow nWo member, Kevin Nash, the pink-attired Bret Hart (almost won on the merits of his paint deco alone!), debut Kane, Papa Shango and SCSA with two belts!

Honorable Mention: Mankind
The runner-up is Mick Foley's most famous persona, the deranged and eventually comedic Mankind. If you really think about it this toy is two figures in one!

Best of the Rest: Nickelodean's TMNT

After the massive misfires that were the 2009 Star Trek and Terminator: Salvation toy lines, Play Mates came back strong with the revival of the Teenage Mutant Ninja Turtles on Nickelodean via a brand-new CGI cartoon. Play Mates launched a wildly popular toy line to coincide with the release of the animated series and it's done gangbusters at retail, effectively selling out at all stores in my area during the holiday rush. There was also a "Classics" series released, but the new animated designs and wallet-friendly sub-$10 pricepoint of the 4" figures won me over. I ordered the set of four turtles from Big Bad Toy Store back in July and grabbed them for less than $40 shipped!

The figures look great and move well, and best of all are super-fun to play with! Good job, PM!

Honorable Mention: RoboCop (Spring-loaded holster)
NECA worked hard for those '80s-geek dollars with amazing offerings from The Terminator and Predator movie franchises, however my top 1980s sci-fi film is the 1987, Paul Verhoeven masterpiece, RoboCop! This year saw NECA release three different versions of the titular hero: battle-damaged, Night Fighter and this release featuring a spring-loaded holster. The only reason it wasn't my pick for BotRest is because it should have been the initial RC release last year.

Worst of the Year: MattyCollector/Digital River
Where to start? Why even bother? Hell, I was only going to designate Mattel's Voltron as the worst of the year, but my torment didn't end there so I lumped in the whole website and the funky organization that runs it. The mishandling of WWE Legends, delayed deliveries, the most horrible customer service ever, the club subscriptions debacle... God, it just goes on and on. It's hard to believe the company responsible for this also produces the best wrestling figures at retail.

Dishonorable Mention: Bandai's ThunderCats
Mattel might be tempted to say, "Ha, guess we're not that bad after all!"... yeah, they'd be wrong, but Bandai was closing in on their title. 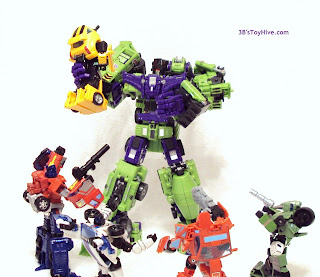 Yeah, I totally cheated with this one! What was released as six separate robot toys combined to give G1 Transformers fans the biggest version of Devastator ever! TFC Toys devastated (pun intended!) all previous, official versions of the Constructicons and put themselves and the idea of large, multi-part 3rd party combiners on the map. Hercules wasn't perfect, but the TFC was quick to correct some major QC issues with the toy and proved how committed they are to customer satisfaction.

And there it is, my picks for the best (and worst) of the year. There were some notable franchises missing like DCUC, Marvel Legends and MotUC. While all of those surely had some great figures this year, the took the backseat in my collection and therefore were lumped into the "Best of the Rest" category.

Stay tuned for my "Toy Wishes for 2013" post in the next week or so where I'll share what I'm most excited for during the next 12 months!