It's been several weeks since I participated in a League of Extraordinary Bloggers challenge, but it wasn't for lack of trying. Anyway, this week the assignment coincides with one of the Hive's regular features, Currently on Display, so I'm killing two birds with one fat, lazy stone.

Post a photo of a shelf of items that displays your love for pop culture.

I'm a bit late to the party with this one and by now there are plenty of posts from other Leaguers, so I'll keep mine brief. This month wrestling figures make it back on to the main display area, focusing on the more recent additions from the WWE Elite Collection. 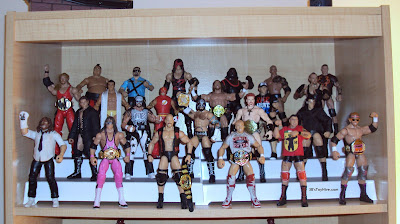 The last time WWE figures were on display was back in March with a Legends-based arrangement. This time I wanted to incorporate modern Superstars along with legends from the "Flashback" subseries. Some of these figures I've had for a while now and have never been displayed. There are also a few I've modified a bit like Triple H & Sheamus who get updated headsculpts. I finally took a few minutes to trim down Bret Hart's knee pad to a more acceptable size, revealing more of the cool design on his tights. I also gave him his missing elbow pads, but used the pads from the decapitated Basic Triple H to give him a more accurate look than the ones on the Defining Moments figure. 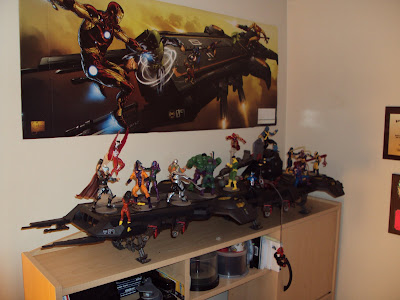 Over the desk, a bunch of 3.75" scale Marvel figures are in the midst of battle on the S.H.I.E.L.D. Heli-Carrier. It took me a while to set these and it would be impossible to sustain without the use of lots of figure stands! 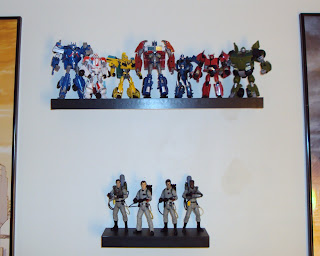 On the opposite wall I set up my first Transformers Prime Autobot display with the main cast, but also included Cliffjumper (FE) and Ultra Magnus to round things out. Below, the Ghostbusters are ready for action! I'll eventually switch these up with the dark grey uniforms and Santa caps, just in time for Christmas! 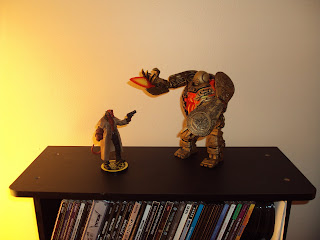 And lastly, HellBoy tests his Right Hand of Doom against the mechanical menace of a Golden Army soldier atop the DVD case.

That's it for me, hope it was brief enough, now venture over to the following blogs and see what the authors have on their shelves!

Hey, don't forget to enter the Hive's Christmas Contest for your chance to win one of three prizes! Click the button at the top of the page for details!