There are certain army-building action figures that are supposed to look identical. The storm troopers from Star Wars. Foot soldiers from TMNT. In Transformers lore there a more than a few: Scourge's Sweeps, the Sharkticons, TF Prime's Vehicons. But sometimes you get a figure that is supposed to represent an army or collective of similar, but different troops. Case in point: the Junkions.

Hasbro did a nice job delivering a "classics" Wreck-Gar and his retool/redeco, Junkheap in the "Reveal the Shield" and "Generations" lines, respectively, but two figures does not a squad make. I bought multiples of each thanks to the fantastic decal kits released by Repro Labels (Wreck-Gar & Junkions 1 for the WG figure, Junkions 2) for Junkheap). But there's only so much you can do with decals. That's where Lucky Rogers steps in with this upgrade for the Junkion mold. 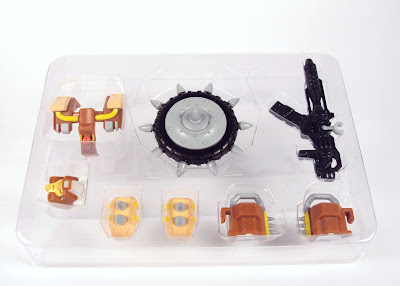 The kit consists of eight pieces: 1 head, 1 chest armor, 2 spiked shoulder pads, 2 spiked knee pads, 1 spiked wheel shield and a blaster. All the pieces are packaged on a transparent plastic tray within a small black box. The entire kit is made of plastic molded & painted in the appropriate colors, which are matched to the Wreck-Gar version of the mold. 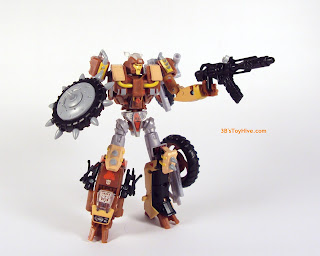 Adding the kit to your RTS Wreck-Gar is a straightforward process. First you have to remove the figure's head, which turned out to be a lot easier than I thought it would be. You basically just yank it off the peg (replacing it is just as easy). The Lucky Rogers head is a little tougher to get on there, but once you do, it's a snug fit with no wobbling. Also, I've removed and replaced it a few times and haven't noticed any visible stress marks in the plastic, so it seems to hold up well.

The head serves its purpose well as a non-descript Junkion trooper. The top of the head is sculpted to emulate the motorcycle's windshield and side view mirrors. It's also transparent to light-pipe the eyes which are red and glow quite nicely when provided with a light source.

The face on the figure has a sort of robotic smile that gives him a somewhat jovial appearance, but could be interpreted as him being excited for combat also. It works well with the Junkions often giddily violent depiction in the old G1 movie and cartoon. The head is slightly wider than the stock WG head, so it bumps into the tall shoulder areas on the figure. You can still work it around and in fact you must in order to transform him into vehicle mode. Unlike Wreck-Gar's head this one hides the face when converted into a motorcycle. 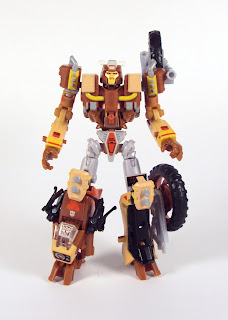 The rest of the pieces connect to specific parts of the figure. The chest armor obviously goes on the chest. It has holes to accomodate the pipes sticking out of the top of the figure's chest and a tab to fit into the slot on the abdomen. There are right and left shoulder pads which are distinguishable by pointing the spikes forward with the grey handles facing up.

I like to remove the front wheel on most of my Junkions when I display them in robot mode, it reduces the space they take up and makes it easier to arrange them in a group. However I found that the spiked pad won't stay on the left shoulder without the front wheel assembly in place. I don't hold against the designers, they clearly worked within the confine of how the figure is supposed to be transformed.

The knee pads look identical from the front, but are very different on the back side due to the way in which they connect to the figure. The right pad slides over the rear of the gas tank and snaps into place once you push it down all the way. The left pad has a c-clip that attaches to the exposed end of the motorcycle seat's frame. The clip may be just a bit too tight, it's started to crack on mine. I may have unknowingly cracked it, but either way you should use caution when adding it to the figure. 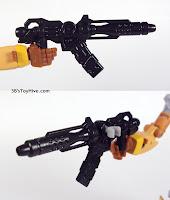 Any TF add-on kit worth it's salt wouldn't be complete without some new weapons and Junk Armor Warrior set delivers a couple of great ones! First up is the blaster rifle which delivers a great alternative to the tailpipe axe the Hasbro figures come with. It's reminiscent of an AK-47 type assault rifle with an oversized "banana" clip magazine, modified of course to look like something futuristic. I absolutely love the design of this weapon! It works well to give the Junkions a "guerilla warfare" feel.

The blaster has plenty of details sculpted right into it and includes a ball-jointed C-clip so you can attach it on the figure's back or alt mode. There are openings on the rifle with the rear one allowing you to clip the shield on to blaster. 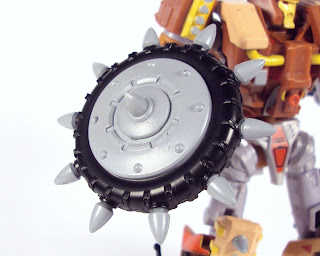 Speaking of the shield, it's modeled after the spiked wheels some of the movie Junkions carried around or wore. 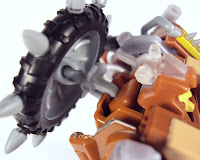 The shield is constructed of a few different pieces, mostly molded in grey and later painted black on the "tire" section (or maybe it's the other way around, I can't tell for sure).

Just like the blaster rifle the shield features a C-clip that's attached via ball-joint. There's also a peg that fits into the figure's hand. Since the peg is part of the same piece as the C-clip, it can be rotated around for multiple posing options.

Since the figure is already wheel-heavy on his left side, I prefer to put the shield in his right hand to balance him out a bit. However, you can fit the handle into either hand inspite of Wreck-Gar's weird opened fingerThe clip allows you to store the shield on the back or anywhere a C-clip would work. 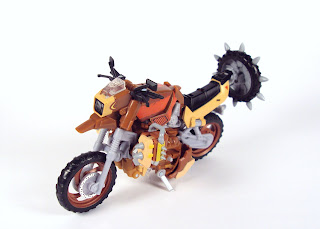 There have been previous attempts at add-on parts for Junkions, however the Lucky Rogers kit manages to keep the figure convertible with minimal "parts-forming". Plus the pieces that you do have to remove can be stored on the motorcycle!

Converting the upgraded Junkion does not requiring the head (you still have to rotate backwards) or chest armor which are the major components of the kit. Wreck-Gar has enough space between the rear wheel and where the upper torso ends up in motorcycle mode to accomodate the boxy chest gear.

Using the C-clips you can attach the blaster rifle to the grey handle portion of the spiked pads and the shield can be mounted on the back of the motorcycle. 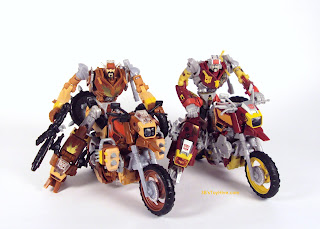 Once all the pieces are in place you end up with a very aggressive looking dirt-bike quite worthy of being a Junkion alt-mode. And the best part is having those pieces on the motorcycle mode doesn't hinder the ability to have another Junkion figure ride on it! 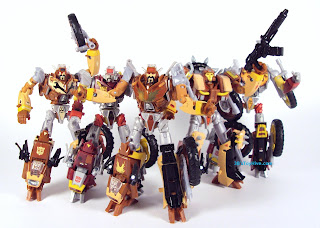 As far as I know this along with the "Medic" kit (designated JK-01M and featuring an alternate head and tools) are Lucky Rogers' first product releases, but they're certainly an impressive debut. Though both kits are color-matched for WG, they still work on the Junkheap figure, if you don't mind the clashing colors, but considering the random nature of the Junkions' composition it may appeal to you. Ideally LR will release a redeco of each kit to perfectly match the "Generations" release. If you have more than one Wreck-Gar figure on your shelf this is definitely something to help add some variation to the display.

I'm eager to see what Lucky Rogers releases as a follow-up (aside from a Junkheap redeco of this kit) because this set displays their interest in spicing up the Classics TF collection with a quality product and preserving the figure transformations, which is always welcomed in an upgrade kit. 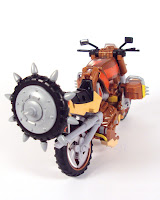 UPDATE (Dec. 21st)
Lucky Rogers has informed me that the issue with the left knee pad has been corrected on the production kits that are now shipping to retailers. So there's no excuse to miss out on it!

Many thanks to Lucky Rogers & the Toy Designs crew for supplying this review sample! Click here to see more "Third Party" TF reviews and be sure to sign up for the 3BTH newsletter to be informed of new posts as they appear!