After a couple months of massive hauls, things have slowed down in preparation for Christmas, but that doesn't mean the Honeypot is empty!

There are only two figures in this week's pot with some goodies thrown in for good measure and a new addition to the display area! Come see! 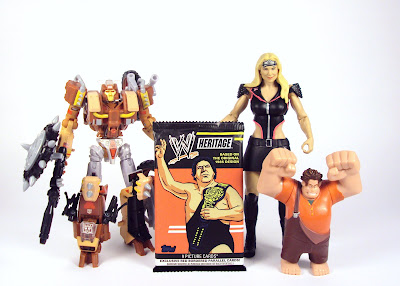 The week kicked off when I received my first-ever review sample courtesy of Lucky Rogers. I was a bit nervous about getting the item in-hand... I wondered, "Would it be any good? Would LR be happy with the review?", and more importantly, "Would regular Hive readers be receptive to a "sponsored" review?"

I'm happy to say the kit is good and so far the response has been positive to the review. Ideally I could secure future samples, but it's not a priority. In all honesty I don't pull anywhere near the numbers the big review sites or YouTube reviewers do, so it's highly unlikely I'd get more samples. But on a personal note, it's a nice accomplishment to receive something for the sole purpose of relaying my opinion of it. And for that, I again thank the Lucky Rogers crew!

I had two WWE purchases this week, but the latest version of Beth Phoenix was the only figure. This past Summer I purged a lot of my modern WWE figures (mostly the ones I wasn't too crazy about) and my RR Beth went with them. I was okay without a BP in my collection until I saw this new version. After passing on her a couple of times I then decided I wanted her, which of course meant I was no longer able to find her (I HATE when that happens!). This past week my local Kmart restocked her, so I was able to grab her at retail.

While finishing up my Christmas shopping at Target, I noticed these "WWE Heritage" trading cards. I initially thought they focused solely on the Legends due to Andre the Giant on the cover and the fact they have separate, modern-style cards right next to these. Opening up the pack I discovered that they do feature Legends, but are basically "throwback"-type trading cards.

I really got a kick out of these and immediately started researching prices on a sealed hobby box. The prices I found were around $65-70, which is just way too much for me to pay right now, but may after the new year. Until then, I may pick up a pack or two whenever I'm at the store. TRU has them, too, but they're a little more expensive. I haven't collected a trading card set in a few years, so it'll be fun to try to complete this one.

My last toy purchase was a figurine based on the titular hero from Disney's Wreck-It Ralph. I've been eyeing this little guy for the past several weeks, but at $7.99 (Target, Walmart), he just wasn't doing it for me. I had to make a run to TRU on Friday morning to pick up a gift for my daughter's school Christmas party when I found WIR for 20% off, I thought that was a bit more bearable.

I actually haven't seen the movie, yet, but I want to. My girlfriend took her best friend's daughter to see it, so to tease her about not taking me, I sent a picture of the toy after I bought it with the caption: "Now I can see Wreck-It Ralph for under $7. LOL!" 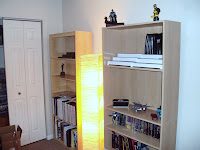 Closing out the Honeypot for the week is a new bookcase I picked up at Target, it's almost identical to the one I already had from Walmart (new one is on the right). I had to settle for the Target version because WM no longer carries the bookcase in that color.

With two bookcases worth of display space I figure I can have at least double the toys out and keep them on the shelves longer. I arranged the new case slightly different with two shelves in the top half to allow for larger figures (i.e. Unicron or those MU Sentinels). I had to remove everything from the old bookcase in order to move it over, but since I work weekends I haven't had a chance to set-up the displays. I'll have to work on them this week.

That's another edition of the Honeypot in the bag. I received confirmation that my FansProject Steel Core is enroute to me and should be in sometime this week. Aside from that I won't be actively huting anything, but I may run into the latest Marvel Universe releases which have reportedly begun hitting stores stateside.

'Til next time, happy huting!