The Honeypot: WWE Elite and a BFR!

Hello once again and welcome to another installment of "The Honeypot", wherein I share my toy finds over the past week (or two). There was only one new addition the week of Thanksgiving so I skipped a post and rolled that toy into today's edition.

Let's check them out! 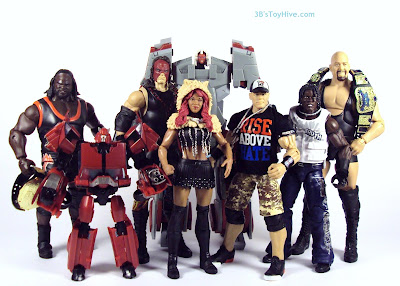 FansProject's latest entry in their Warbot line was the sole arrival just a couple of days after Turkey day. I heard he was heavy, but you don't really understand just how heavy he is until you have him in hand. He's a modernization of G1 Broadside and like Warbot: Defender, he's a triple-changer.

This past week the focus turned more on to WWE figures when I found a few of the newer releases from the Basic series, Alicia Fox and Kane, at my local Target where they were on sale for $7.99 and Elites were $14.99. Alicia reuses the previous Divas body, but I'm glad Mattel's starting to add some accessories since the Divas aren't featured prominently in the Elite line.

The sculpt on Kane's head is really good. In fact, the figure looks good overall, minus the articulation, of course, and you may want to take note that this figure includes elbow pads (so does the "Battle Pack" version) while the Elite figure will not.

I'm currently working on a Title belt guide so that partially motivated my purchase of E10 Big Show (that and I sold off the E4 figure because I wanted a more "traditional" version) and his dual Tag Team belts. Mark Henry seemed like another logical purchase, I get the World Title (metallic!) and a nicer ring attire. I've already reviewed a couple of Elite series 17 figures, but there are some surprises yet to come from that wave. John Cena and Kofi Kingston both receive new sculpts that really improve the accuracy of their latest releases. Stay tuned for those reviews!

While at Target I also stumbled upon the latest Hot Wheels Batmobile, this one taken from the Batman Live! arena show. I was able to grab one for me and one the contest (make sure to hit that button and enter!).

While taking care of a little holiday shopping at Toys R Us (and taking advantage of a great Groupon deal) I learned that there is a new wave of WWE Basic-style, "Best of Pay-Per-View" figures with a collect-and-connect announce table! I think Mattel previously released the table in one of their playsets, but I'm not sure. This one however has WrestleMania 28 logos on it and the folding chair, appropriate since the entire wave is based on that event.

I harvested the elbow and knee pads from The Rock & Triple H (DM Bret Hart is looking a lot more accurate now, BTW) and sold them as a set on eBay. I also swapped the HHH head with the Elite WM27 figure, creating my ideal Hunter figure (see him on display in this month's CoD!). Sheamus sold for $10 and John Cena should sell pretty quickly.

Finally, TRU also had a "Buy 2, get 3rd Free" deal on deluxe Transformers and that's how I ended up with Generations Cliffjumper. He uses the Prime First Edition mold with a new head, but the plastic quality is suspect. I've only transformed him once and he already has stress marks all over the place, something that hasn't happened on my FE figure. I hope it's just an isolated case, either way it doesn't bother me enough to exchange it, in all likelyhood he'll just end up on eBay eventually because I made my own classics Cliffjumper a few months back.

That's it for this installment of The Honeypot, hope you beat the holiday masses and find whatever you're looking for.