With Christmas just about two weeks away I fully expected the quantity of toys in these posts to decrease significantly as funds are allocated towards gifts for others and my credit card reaches it's limit. However, I was truly surprised to run into some new WWE figures last week and picked up a couple along with several other "small ticket" items. 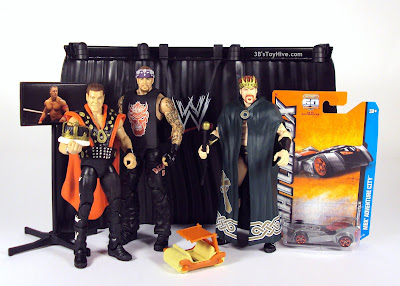 So while I was on my lunch break last Tuesday, I stopped at the newly renovated Toys R Us about a mile from my job. I forgot what I originally went in there for, but I found WWE Elite series 18 on the pegs, apparently one case, hanging on the pegs just next to the main WWE area. I immediately grabbed the two FLASHBACK figures in the wave: "American Badass" Undertaker and Jerry [The King] Lawler.

TRU, Target & Walmart have made me eat my words for the past month with three waves of Elite figures hitting right after the other. Taker & Lawler turned out nice and while I don't have any plans to pick up the rest of the wave the new Sin Cara looks really sharp, so I may grab him eventually. Brodus Clay is a ridiculous character, but his Elite figure looks really good, although it doesn't include his elbow pads.

On a side note, have you noticed BC never wears purple? Do you think WWE is trying to avoid trademark infringement? 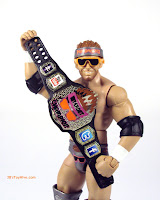 As if there weren't enough things to buy in stores, Hive reader Jeff R. was kind enough to point me to an eBay seller who is the WWE equivalent of Repro Labels. I picked up two sets, the first completes Elite 17 Zack Ryder's Internet Championship belt with the various social media logos he's adorned it with. The sheet includes two sets of the four decals. All you need to do is cut them into squares, then peel and stick them on the belt. I used an Exacto knife which I found worked much better than the small finger nail scissors I tried first.

The second set of decals are meant to give Elite CM Punk his "Pepsi" and "COBRA" shoulder tattoos. These work differently than the Ryder set. For Punk the decals are the type you find on model airplanes or cars. You have to soak them in water before applying them. I don't have much experience with this type of decal, the last time I built a model airplane was when I was an elementary school, so you can imagine these didn't end up looking too good. The good news is you get four of each tattoo, so that's four chances to f*&# them up. I'm down to my last pair with not one decent application to show for it. I plan to do a little more research before I attempt to apply the last pair.

Rounding out the WWE haul are "King" Sheamus and the backstage interview set from the first wave of "Best of PPV" basic figures. This Sheamus, part of series 13, has been on my radar since before it was released, but I could never justify the purchase until now. That's because Target still had Elite figures on sale for $14.99 and I needed one more kingly-attired wrestler for the action figure Nativity scene photo I submitted to Lair of the Dork Horde for their annual contest. 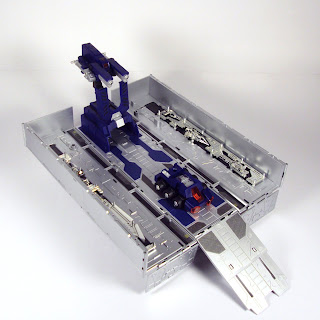 Last year I picked up BTS' unlicensed Optimus Prime trailer and was really happy with it, but this year I expanded my FansProject collection to include the City Commander armor, among other items, which interacts with this trailer. Plus the G3 trailer includes a bunch of weapons for a few other classics Transformers.

Off the bat, the quality on this is really nice on par with FansProjects later offerings and quite distinguished from the BTS trailer. I also love the fact that Roller is a separate component like the original G1 toy.

I initially went with the BTS version because I was able to get it cheaper and it filled the void, but Big Bad Toy Store lowered the price on the FansProject trailer to $60, which is about what I paid for the other one last year. I'm definitely glad I picked this one up and will hopefully have a review up soon.

And finally this week's Honeypot concludes with two new 1:64 scale die-cast cars, both of which I had no idea were even out there! Mattel's Hot Wheels continues to deliver beloved pop culture vehicles with their latest: The Flintstones' Flintmobile!

The second vehicle is from Mattel's MatchBox line and is a repainted version of the "Total Destruction" Batmobile from their current Batman "Power Attack" action figure series.

That wraps up another edition of the Honeypot. I can't promise a new installment in the next few weeks as I don't plan on making too many purchases for myself, however I am still waiting on my Warbot: Steel Core preorder to come in and you never know when WWE Elite 19 will hit, so...

Hey you! There are only 4 days left to enter 3B's Toy Hive's Christmas Contest where you could win a Transformers Wheelie figure, the TRU-exclusive "WrestleMania 28" Elite Underataker or a set of Batman Hot Wheels vehicles! Enter today!
Posted by 3B at 9:24 AM