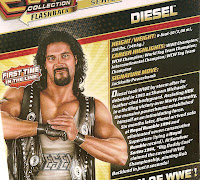 When WWE Elite series 16 was announced I was happy to see Kevin Nash enter the line. While I was most excited about his Diesel version, I picked up the NWO figure, too. I was fully expecting to like his classic WWF version more than the other, but that didn't turn out to be the case.

With both figures in hand I can tell you for certain that not only do I prefer the NWO figure, it's the better figure. Not only is Diesel the weaker of the two, he's a rather weak offering overall.

I'm sure that is confusing to some fans, but in what should have been a pretty straight-forward variant, Mattel made some choices that are just plain odd. Let's try to sort out what happened with Diesel here.

This release receives a new head and not just a new head with a different expression on the face (although it has that, too). It's an entirely new head with shorter, black hair, but it just doesn't look like Diesel to me. It actually reminds of Christian Kane, he of Angel and Leverage fame, with a goatee. I don't know what reference art the design team used for the figure, maybe they grabbed a photo of the fake Diesel, you know, this guy. Maybe he's meant to be an Easter egg. An Elite Flashback "Fake" Diesel. It just doesn't look like Kevin Nash to me. Hell, it doesn't even look like the OTHER figure to me. 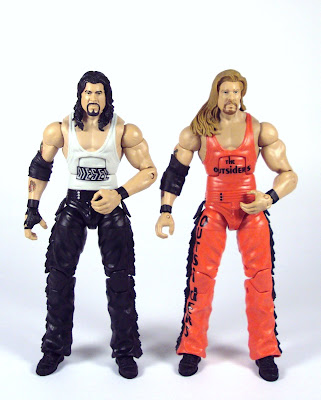 Please note that neither one of these figures comes packaged with a right elbow pad, I added those myself. Below the neck you would automatically assume these figures are identical considering they're both wearing tank tops and tassel-tastic pants, but there are a couple of differences the first being Diesel's arms are smaller.

I think the choice to borrow Undertaker's torso still hurts the figure, but the smaller arms look better proportioned than the massive biceps the NWO figure is carrying.

The other difference is in the hands. Diesel's left hand is has a tighter grip while his right hand is gloved and has a much wider grip. The right hand is obviously borrowed from Kane, but I have a major issue with it.

The glove is not fully painted!

Look close and you can see they stopped painting it just below the knuckles, leaving the sculpted fingers of the glove the same color as the hand. I've seen other Diesel figures and it's the same on them, so they designed it that way purposely. What the fudgepops is that, Mattel?!

I understand that perhaps Diesel's right hand gloves may have had shorter finger sections than Kane's do, but come on. There are two ways they could have done this without having to tool a brand-new hand: borrow Kane's, fully painted, or use a plain hand and simply paint on the glove. I would prefer the glove be fully painted, but the other option would have been better than this. This just looks stupid and lazy on Mattel's part. 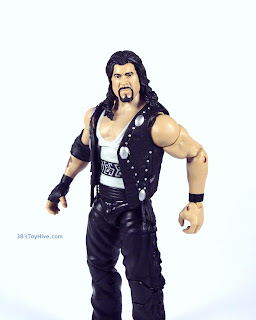 Diesel includes two accessories, but one of them is something we've seen a few times before. First up is the biker vest he wore during his entrance to the arena.

It's a 100% new accessory molded in soft plastic and featuring plenty of sculpted details to recreate the different layers, tassels, studs and medallions on the vest. I can't help but think that the vest may have had something to do with the designers' decision to use smaller arms on Diesel. The armholes in the vest are very close to the arms and I think the larger arms would have made it very difficult to remove the vest.

That's Mattel for you. Just when you think you've figured them out... 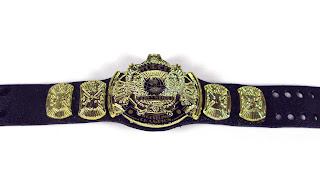 Diesel's other accessory is the classic "Winged Eagle" WWE Championship title belt which we've seen a few times before already. However, I believe this is the first time it's been released in the Elite Collection series. Unfortunately I ran into a couple of quality control issues on the one included with my figure.

If you look at the photo above you may notice a discrepancy with one of the outer medallions. The one just to the right of the center medallion is wrong. It should look like the medallion on the left side. 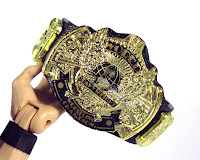 The other problem is on the large center medallion. The vac-metal finish is scratched on the globe and to the right of it. There are some scratches on the words, too. I hate running into quality control issues on my toys and don't hesistate to return them to the store and exchange them for new ones. However, with a hard-to-find figure like Nash, I would normally wait to find another figure, buy it, then return the damaged one.

I did spot another Diesel figure, but I didn't buy it. I decided to just keep this figure because the figure itself is fine and I already have this belt a couple of times over, so I wouldn't want to return it as damaged and make an already HTF figure even scarcer. 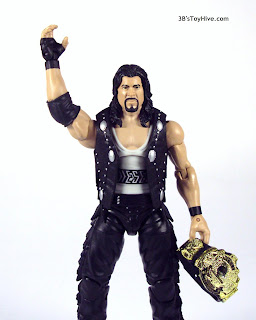 Diesel didn't turn out horribly, but he's nowhere near the best we've seen in the Elite line this year. I'll still have a spot for him on the display, but I may wait to have a early '90s WWF display before I'll put him out. I know both versions of Kevin Nash are difficult to find, but you come across both of them simultaneously and can only buy one, I recommend the "Outsiders" version.

Don't forget to enter the Hive's X-mas contest (hit button at the top)! The deadline is Friday at midnight, so enter now!