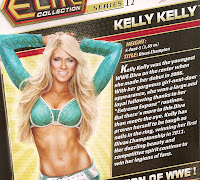 Well, it only took seventeen waves of WWE Elite figures before a Diva was introduced into the line. Sure, we've had Divas before in the basic series, but those were just as plain as the male figures in that line, with the exception of a different articulation model. Many fans wanted to know if/when Divas would be included at the Elite-level with entrance gear and accessories.

But basic series 23's Alicia Fox features the first real entrance accessory any Diva figure has recived, so what is the point of creating an Elite Diva now?

Let's see if Kelly Kelly has the answer!

As far as I can tell, it's all about the gold! Or platinum(?) & pink, in this case, in the form of the WWE Divas Championship. There's also the inclusion of a cloth accessory, but we'll get to that in a moment.

The Divas title was first released with the Bella Twins two-pack, but like many of the basic series title belts it was cast in dull, unpainted plastic. Not quite the kind of accessory that pacifies collectors looking for authenticity, especially those who demand it from the Elite Collection. So taking advantage of the (presumably) higher manufacturing budget in the Elite line, Mattel created a vac-metal version, complete with painted details.

The detailing on the belt is great, but I feel it's a bit oversized, which is a problem with some action figure-sized belts. It's more obvious on the slimmer Diva bodies than on the male figures. Aside from the scale, the belt looks great and is an accessory worthy of appearing in the Elite line. 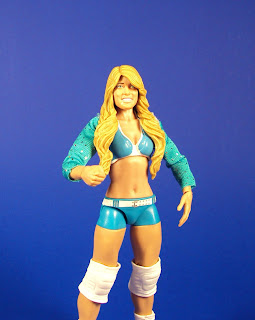 Kelly² also includes an entrance-based accessory designated as a "sleeve jacket" on her package and it's pretty much exactly what it sounds like. The plus here is that it's a cloth accessory which seem to be apppearing less frequently in the Elite line.

The details on the jacket look accurate to the on-screen version worn by Kelly Kelly. It's a tight fit on the figure so take care when removing it to avoid damaging it. Always try to slide it down the arms by "pushing" it down instead of pulling on the sleeves. This will prevent you from breaking the stitches holding the sleeves on.

Once we're past the accessories we arrive at the base figure and this is where everyone's mileage will vary. While this is Kelly Kelly's first-ever Elite figure, it's her third by Mattel. The Elite figure receives a new head sculpt with longer hair. I feel the likeness on this figure is much better than on the previous Basic series figures, both of which utilize the headsulpt from her series 6 figure. Also, the hair, which is a separate rubbery piece, is molded in a more-realistic tone. 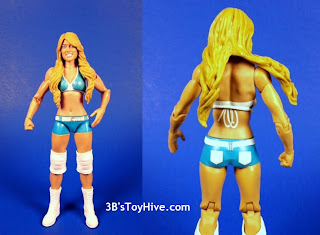 Below the neck the Elite figure is structurally identical to the RAW Supershow figure which is the same as the series 6 figure with the addition of knee pads. That also means it features the same articulation model.

In the Basic series the Divas have more articutlation than the men with the use of a chest pivot, ball-joint hips and thigh swivels, however it's less than what males get in the Elite lines. I didn't expect a complete overhaul of the Divas model, but I would have liked double-hinged knees, if not swivel/hinge wrists, too. I can't help but feel slightly disappointed and cheated.

The paintwork on Kelly looks good with no real problems on my figure, but she suffers from the same issue the basic figures had (along with Michelle McCool's): her costume is painted over sculpted lines! This can be very distracting when viewing the figure up close. Apparently the torso was originally designed for Melina because her's is the only figure on which this torso is painted along the sculpted seams and Mattel just decided to use it as the default Divas body. 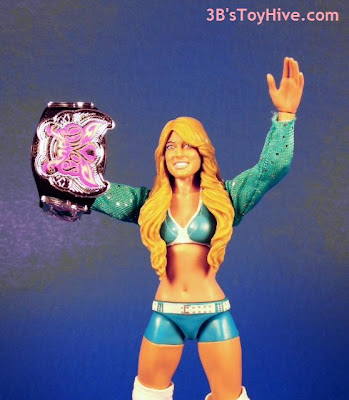 So what's the bottomline on our first Elite-level Diva? The accessories are good. The paint is good. But I feel the reuse of the upper torso and lack of more articulation really hurt the figure. Don't get me wrong, this is hands down the best Kelly Kelly out of the three Mattel's released so far, but I expect more from an Elite figure. If you don't have any of the previous Basic figures, you should snap this one up because it's currently in stores.

Other than that you'll have to decide how much the new head and improved Divas title are worth to you. Those should be the real determining factors here. The sleeve jacket turned out well, but it's not something that would have influenced my purchase had she not offered a new headscan and title belt because it isn't a particularly elaborate or memorable garment.

I picked up Elite Kelly Kelly because I grew tired of the B6 figure and sold it off on eBay during the Summer. I like this figure better, but it still needed a few more things to truly be an "Elite" release.