Today CoD makes a comeback with a new edition that's heavy on the wrestling, mode-changing robots and a couple of battle scenes! Last month I added a new bookcase to my office affording me some extra display space and more options on the type of displays I can set up. I've been working on these displays for about a month now, waiting for some of the newer purchases to arrive in order to fit them in and also constantly tweaking exisiting figures to optimize them for the collection. Swapped out a couple of heads, adjusted some ring gear on several wrestlers, added/removed some accessories of various figures and now I'm ready to share them with you.

So jump ahead and see what's on display at the Hive at the beginning of 2013! 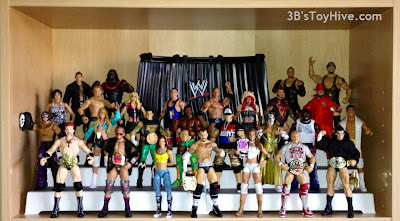 Apologies for not including a shot of the office as a whole, I have a bit of a mess on the floor right now (if you follow the Hive on Facebook you know what I mean), but basically the two bookcases and my desk are aligned against the back wall of the office. It's a nice long display of toys and pop culture! I'll make sure to include a shot next time.

Anyway, the new display is occupied by my "modern" WWE display and diorama featuring the X-Men fighting a squad of Sentinels. Some of the changes I've made to my WWE figures include: new lower legs and knee pads for Big Show, head swaps on Sheamus, Randy Orton and ADR, trimming CM Punk's knee pads and removing Rhodes'.

Obviously, champions aren't up to date, but we don't have Kaitlyn (Divas) or Antonio Cesaro (US), yet. I still haven't found the modern Kane & Bryan (Tag) and I totally hate Wade Barrett, so you won't see him on my shelf, much less as the IC champ. 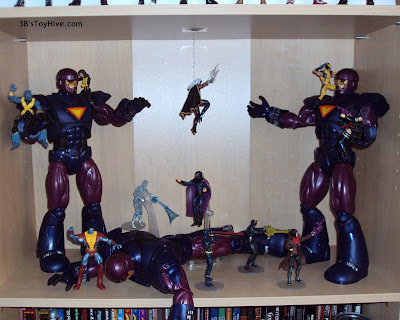 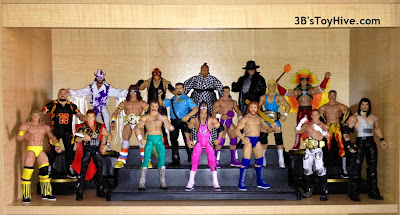 This Legends display started off as an early-to-mid '90s arrangement, but kind of lost focus and I just ended up putting in some figures that haven't been displayed much. I tried to show off ring gear instead of focusing on entrance attires. When I eventually rearrange it I'll be adding a new extendable spice rack like the one the modern WWE display uses. 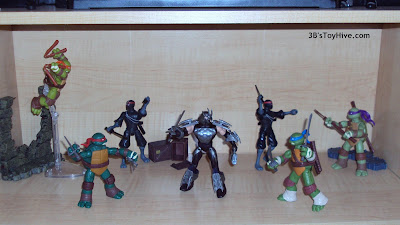 Below the Legends I have my first TMNT battle scene between the Turtles and the Shredder and his Foot soldiers. A recent purchase will serve to enhance this display in a future edition of CoD. Stay tuned!

Finally, the hutch over my computer desk focuses on Transformers G1, season 1 & 2 characters. Many have been upgraded with Repro Labels and third party accessories like Red Alert's head and weapons, Inferno's arm cannon and Prime's rifle. I don't much care for mini-bots so that's why you don't see any Brawn, Huffer or the like. I'm hoping to find the FoC Grimlock soon, but some reviews have left me cautiously optimistic about adding him.

That wraps up this edition of Currently on Display. Thanks for viewing!