Hello and welcome to the first edition of "The Honeypot" for 2013! I skipped doing a Christmas Honeypot because like I mentioned before I handle all my toy purchases and I didn't really receive anything toy-related for Christmas. I did manage to pick up a few basic figures of Zack Ryder and R-Truth, but those were purchased to have alternate heads/parts for my Elite figures and have already been disassembled so a pic would look odd.

Anyway, let's see what's kicking off the new year at the Hive! 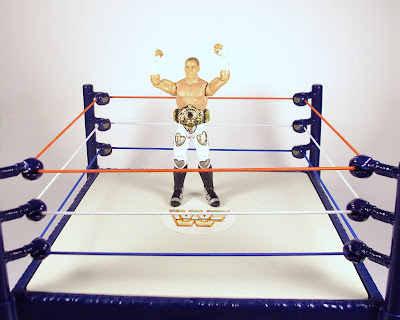 So without even looking I ended up with two new wrestling rings. I already had the first "RAW Superstar Ring" with the red ropes, but while looking on eBay I noticed the dude that sells the Internet Championship decals (among others) was offering up a set of decals for the "Tribute to the Troops" ring to turn it into the old school WWF ring.

If you're not familiar with the TttT ring, it's exclusive to Kmart and is molded in blue plastic with red, white and blue ring ropes. I found the ring on sale at Kmart for about $5 off it's regular price, so I grabbed it and ordered the decals. This is pretty much the closest will get to a Mattel Legends wrestling ring, so I'm okay with it.

The decals are high-quality with the only drawback being you have to cut them out yourself. You can follow the outline of each decal to help you, but my skills at cutting circles are severely lacking. I should also mention that the TttT ring includes an American Flag, military helmet and vest. The helmet is the only newly-sculpted piece, the other items were repurposed from previous figures. 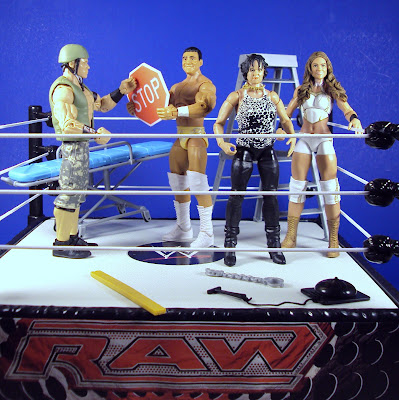 The next couple of purchases served to enhance figures I already had. I decided I really wanted Ryder's E9 entrance jacket for the E17 figure so I scooped one off of eBay for about $9 after shipping.

If you follow the Hive on Facebook you know I wasn't happy with Demolition's size difference, so I bought another Ax figure to correct my Smash figure. You can read about it by hitting the link above, it will direct straight to the update within the original Demo review.

I was checking out the forums over at WrestlingFigs.com when I came across the news that the Walmart-exclusive "Ringside Battle" set was being clearanced. I remember seeing this set in the Fall and thinking it was a pretty great deal; a wrestling ring, two basic figures and a bunch of accessories for $25! I checked my local WM, but they didn't have any more. During my lunch break the next day I drove over to the Wally near my job and found one set left. There was a clerk doing... not much because the action figure aisle was basically empty, and she specifically pointed to the RSB set and told me it was on clearance for $12.50(!). I played it cool and told that was a great deal and said, "I'll take it. Thanks.".

A couple of quick notes on the set: It's the same old Superstar ring, but it features white ring ropes like the current WWE ring, however, the posts are still black (boo, Mattel). I don't care, nor have a purpose for the John Cena figure, so he'll be sold off, but the Alberto Del Rio gave me an alternate head for my E12 figure and knee pads. I already had the handcuffs, the 2x4 and the steel chair, but you can never have too many steel chairs. The other accessories are new for me: the ladder, stretcher, STOP sign and ring bell. All cool little items to create an interesting display with.

The ultimate goal is to find a way to display these with some figures. I know the scale is too small, but the Elite-Scale Ring was way too big which is why I never bought it when I had the chance and these Superstar rings are still kind of big for a practical display. I have some ideas of how I can fit them in the bookcases, but nothing finished, yet.

A pair of WWE Divas completed my purchases for the first two weeks of 2013. I found Eve last week at my local Target where they had apparently just received a case of Basic series 25, the only new stock in the action figure aisle. There was only one Eve. I of course grabbed her right away. There was a delay at the cash register because she didn't even appear in their system (don't know how that happens), but after another employee walked her all the way back to the AF aisle and made her way back, Eve was on the way to my display shelf where she bumped off Kelly Kelly as Divas champ.

Just in time for her loss to Kaitlyn this past Monday night and subsequent departure from the WWE...

I consider myself fairly lucky when it comes to finding Mattel's WWE figures at retail. Aside from exclusives, I've never had to pay above retail for a figure (second Demolition Ax aside). There has only been one WWE figure to elude me at retail...

And it was the rare instance where I had other looking for her, too! But no luck. I never once saw her in stores, so I gave in and bought her off of eBay. I paid $25 with free shipping. Not horrible, but pretty much the most I would feel comfortable paying for a basic figure. Perhaps she'll be re-released eventually, but this figure is kind of a two-in-one. You can remove her blouse and have her wearing an all-black outfit. I think I'm good with just this figure.

Well, that's it for this addition. Slim pickings at retail right now, but I keep checking my local stores every couple of days to hopefully get there right when they restock.