The Honeypot: WWE & TMNT playsets and a gift from Matty!

Business picked up a bit this week thanks to a stellar sale at Kmart and the arrival of some new Teenage Mutant Ninja Turtles product at stores. Still no sign of WWE Elite 19, but I was able to pick-up a few older WWE items, the highly-anticipated classic World Tag Team title belts and received a gift (read: headache) from Mattel.

Keep reading to see what else came into the Hive! 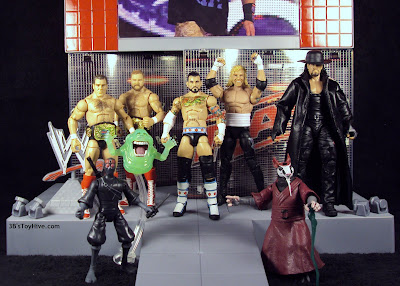 The haul kicked off on Friday (the 18th) with a trip to Sear's where I was looking for some "Hello Kitty" shower curtain hooks to complete my daughter's madeover bathroom. To my surprise I found WWE action figures there, too! I picked up the Elite series 14 Undertaker, which I passed on so many times on my travels, I lost count and of course was unable to find once I finally decided I wanted it. 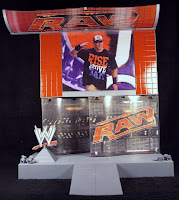 Kmart's holding their annual "Royal Riches" promotion in celebration of the Royal Rumble event with some nice sales on WWE Basics, Battle Packs, Elites and playsets. I picked up the Daniel Bryan vs. Big Show set to get the bandage included in the pack. I had an idea to use it for DDP, but didn't want to spend $20 to find out if it was compatible with him. Last week I saw a pic on the WFigs forum someone posted with DDP sporting the wrap, so decided for $15 it was worth picking up the set and selling the unwanted figures loose.

Also on sale was the Kmart-exclusive RAW Entrance Stage, which I've been eyeing for about a year now, but never felt it was worth the $52.99 asking price. I thought it might go on sale for the holidays, but nope. It's currently selling for $40.34, still a bit high, but once you open it up you realize how huge it is. There are a few shortcuts taken by Mattel to produce this, but nothing a little tinkering can't correct. I'll work on a review soon to properly go over all the features. Plenty of fun to play with and a nice display piece, for sure.

I recently sold off some old Marvel Legends figures so I had some cash in my PayPal account and decided it was time to add the classic WWE Tag Titles to my collection. Of course that meant having to purchase the Brain Busters off of Matty Collector, or did it... I was close to placing the order on the dreaded webstore (more on that later), but decided to check eBay just in case there was a good deal. Well, a seller had the pair MIB for $52 shipped, saving me rougly ten bucks. Saving money and not having to deal with Digital River? Hell, yeah!

The belts turned out really nice, but I feel like I payed over fifty dollars just for those because the figures themselves are very disappointing. I'll probably review them eventually, but who knows... 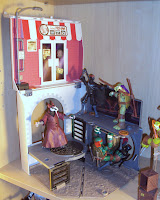 One of the coolest toy lines to debut in 2012 was the one based on Nickelodean's TMNT series. Last year I picked up the four turtles, Shredder and a couple of FOOT soldiers, but wasn't planning on much else. Well, that was until I saw the "Pop-Up Pizza" playset. The huge Sewer Lair playset is too big for my displays, but this playset-in-a-box, titled "Anchovy Alley", is perfect for display purposes. My daughter and I vigorously tested it, putting it threw it's paces with Ninja Turtles, wrestlers and Lil'est Pet Shop toys. Our concensus: it's FUN!

TMNT is the only action figure line being restocked with new product at Walmart and TRUs in my area. I've seen the new "Ooze"-based series of figures and vehicles at both stores along with the Anchovy Alley playset. Along with those new items some stores have restocked the first couple of waves. I decided now was a good time to pick-up the turtles' mentor, Splinter, and a couple more FOOT soldiers. However, the FOOT seem to be packed 1 to a case and most of the figures I found had horrible paint apps. I finally found one I was satisfied with, but ideally I can pick-up one more for the display.

That first Kmart didn't have any Elite figures I wanted, but this past Friday I stopped at a different one and found series 18 and most of 16 where I looked through nearly 10 CM Punk figures before I found one I was "okay" with. It seems Mattel skimped on the paint for this version of Punk because many of the white apps were very weak. Anyway, what I really wanted was the "BITW" t-shirt to add to my series 11 figure. Also, I grabbed the latest Basic series Punk for the smirking head.

The E16 figure's attire is nice, and like FB reader Daniel A. recently mentioned is somewhat iconic for Punk (it's the one he wore when he defeated Cena for the WWE Championship at MITB 2011 & wearing on the cover of his DVD), but the QC sucked on this release. Nearly all the figures I saw had stray marks and weak paint apps. That aside, I still prefer the E11 attire, but don't mind having this one as an alternate. Plus his chest tattoo is (mostly) colored in on this release.

Keeping the mods/ alternate display options going, I picked up the recent WrestleMania Heritage Undertaker figure based on his appearance at WM21 to use with the "American Badass" flashback figure and create his later AB look. Also the WMH figure includes a large left elbow pad, so I can swap that in and change him up a bit more. I really like the sculpt of this head and it looks great on the Elite body with the Entrance Greats hat & fabric coat.

I kept passing on this figure because I didn't want to spend $12 on him since I was still waiting for the E18 figure at the time. Afterwards I couldn't find it anywhere. I considered eBay, but the prices were too high for a basic figure. I finally found one at the "rich people" TRU. I had a coupon for $5 off any purchase so ended getting him for $8.55.

And finally, I "received" my free gift from Matty Collector as an apology for the failure of the 2012 Club Ecto-1 subscription. It's a remolded version of the Slimer figure that was packaged in the Ghostbusters II box set a couple of years ago, this time using glow-in-the-dark plastic. It's a nice little version of Slimer, but unfortunately Digital River managed to screw this up, too.

You may remember a couple of posts on the Hive & FB where I recounted my troubles with Matty Collector & Digital River last year. Well, even after updating my address with them on nearly five different occasions, my gift was sent to my former residence which is apparently occupied by people who don't give a shit about someone else's mail. This time I was able to get a hold of my former landlord and made sure to follow-up with them once I received delivery confirmation. After some scheduling conflicts I met up with the new tenant and recovered my package which had been opened, but everything was still inside and undisturbed.

The guy said his son, who was in the backseat with another young boy, opened it so I didn't bother making a big deal out of it, but this exactly the reason why I had to get the BBB involved last year and have Digital River cancel my DCUC sub.

I hate to beat a dead horse and trust me, it feels like I am physically beating a dead horse every time I talk/write about DR/MC, but I bring it up because He-Man.org is currently holding a poll asking why you have stopped buying MotUC on Matty. Now, for me MotU isn't a huge enough deal for me subscribe to all the figures. At the beginning I would have liked to sign up for just the 12 monthly figures, but the diehards took over and decided they wanted an "all-in" sub and Matty said they couldn't do tiered subs. That effectively put fans like myself in the "cherry picker" category, which they said couldn't support the line. They "needed" subs to keep it going.

To really stick-it to the cherry pickers, they lowered (supposedly) the production runs on figures, making it nearly impossible to get some figures day-of. No Fisto for me...

But that's all been talked about before, let's get back to the poll. There are no less than six options (because they want to know the PRIMARY reason) plus a seventh "other" choice where you can write-in a response. You can only select 1 option. For me it was "shipping is too high" because the cost of shipping one figure is absurd. But the truth is I could easily pick four of the options as to why I avoid the line now. Plus add incorrect sales tax, rude/imbecilic customer service reps and on and on...

At the end of the day, what's the point? Nothing changes. And if you want these toys, you're at the mercy of Matty/Digital River. I gave that up and I'm much happier not having to deal with them. This "free gift" was just a refresher of why I do little to no business with them anymore.