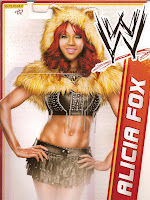 Hello Foxy lady fans! My first review of 2013 kicks off with WWE Diva Alicia Fox who makes her line debut in series 23 of the basic line.

Mattel's Divas figures have come a long way since 2010 when the basic series didn't include any special ring gear or accessories. Over the past few years, the design team has strived to include costume pieces (something the male Superstars, don't really get) to enhance the basic female sculpt. Alicia Fox is actually the first single-carded Diva to receive a proper accessory.

Let's see what she has to offer! 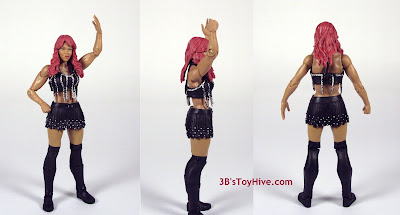 Below the soft plastic bra and skirt, this figure is basically Michelle McCool's with a new head and deco. The headscan translated pretty well to the figure, it looks like Fox and there was just enough paint applied to keep her looking pretty and not like a clown. Her hair is a separate piece of soft plastic molded in a purplish-red. It's not an exact match to the fiery red hair seen in the picture, but it works.

The upper body and arms are molded in a color appropriate to Alicia Fox's skin tone. The bikini top is unpainted, but it is of course covered by the chain-adorned brassiere which is glued shut on the back, so don't bother trying to remove it, unless you don't mind destroying it.

The lower torso is molded in black plastic so it appears she's wearing underwear beneath her skirt. Nice one, Mattel, for a second I thought she was going to be as free as your Disney dolls. Interestingly it seems that her legs are also molded in black plastic from the thigh swivel down, with her thighs painted to match her skin. The hip pieces are molded in the same plastic as her upper body.

Both her top and bottom costume pieces are molded in black, soft plastic with the chains and studs painted silver. The paintwork on my figure was good, with no major issues to report. There are a couple of chips in her left thigh, but nothing too distracting. 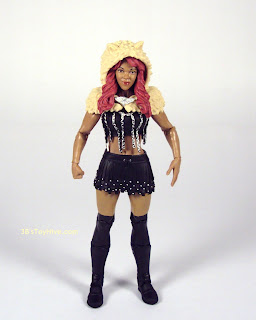 Alicia Fox comes packaged with one accessory very specific to her, the "fox hood" she wears (sometimes) during her arena entrance. It's molded in a soft, cream-colored plastic and is actually two separate pieces, the actual hood and the shoulder piece, that have been glued together at the back.

There's plenty of detail sculpted on to the hood, creating some really nice texture on the piece. It's a shame the couldn't spare a few paint apps to get a nice wash over the entire accessory. That would have really brought out the details in it. The only paint on the hood is reserved for the buckle piece that sits over Fox's chest. It's been painted silver.

I could live without the paint wash, but couldn't they have at least painted the insides of the fox ears? Just as I began writing this post I took a metallic pink marker and filled in the ears to make them stand out more. It actually turned out alright. I'll have to update the post with a pic during my next shoot.

The buckle actually serves as the fastener for the hood. There's a peg hidden behind the left side of the buckle that fits into a hole on the opposite side. The designers sculpted Alicia's hair to allow for it to drape over the hood accessory when she's wearing it, but still look natural when the entrance gear is removed. 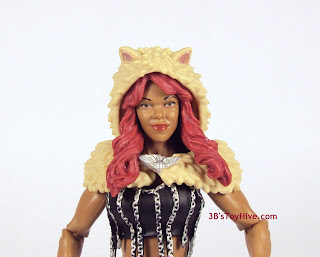 I failed to notice this when I reviewed Michelle McCool, but the legs are misproportioned. If you look at McCool, or Alicia Fox, from the side you'll notice the boots are sculpted as if they run halfway up the calves. However, above the boots is more than half the calves, so the figures end up looking like they have massively long calves. The lower legs do end up looking a bit too long, but the real issue is the size of the boots and the size of the lower leg piece. It's not horribly distracting, but I'm happy to see it's not an issue with the newest Diva in the line, AJ. Hopefully it's something they'll improve on future female figures with similar footwear.

That minor issue aside, Alicia Fox received an impressive debut figure. The added costume pieces and entrance gear make her feel like a better value than most of the figures in the basic series. I scooped her up at Target during the holiday sale and paid $7.99 (plus tax) for her. Not bad at all, but I would have paid full price for her, too!

If you don't find her at retail, I wouldn't go too crazy chasing her down on the aftermarket, unless you're a die-hard Alicia Fox fan. Consider that the Divas roster is kinda minimal right now and we'll more than likely see a refresh of Fox sooner than later.