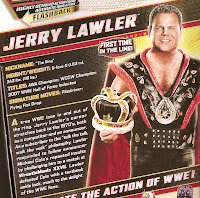 Sorry for the delay in posts, but I'm adjusting to a new work schedule which unfortunately doesn't give me much time for anything on my workdays meaning I have to wait until my days off to get anything Hive-related done.

Anyway, today I'm finally taking a look at Jerry Lawler from Elite series 18, one of two "flashback" figures in the wave. I don't think Mattel has really sat down and defined just what exactly qualifies as a flashback. Sure we know it's their way to get "Legends" into the main retail line and it also features older versions of current Superstars, but this Lawler doesn't really fit into any of these categories. Read on to find out what I mean.

A quick note about the packaging before we jump into the review. Series 18 introduces a slight package redesign. It still utilizes the mostly-white window box that began in series 12, but no longer features the window on the top flap above the figure. Also the red ring ropes that adorn the top and bottom of the package are wider and the bio and pic on the back have been layed out differently. Not a major overhaul like we saw at the end of 2011, but still worth mentioning (although not worth photographing, apparently...).

On to the King, who not only makes his Elite/Legends debut, but receives his first Mattel figure ever with this release. The figure is clearly based on Lawler's appearance at WrestleMania XXVII (in case you didn't read the bio.) when he faced Michael Cole in one of the sillier matches on the card. That was just about two years ago, so Lawler didn't look much different than he does now leading me to dispute Mattel's claim that this is a flashback figure. A true flashback would have given us a younger Jerry Lawler. Hell, they could have just gone back to the early '90s when he feuded with Bret Hart and it would have been fine with me.

The headsculpt captures old man Lawler pretty well, however my figure is cross-eyed and I'm pretty sure the King is not. Mattel sculpted a brand new torso for Lawler featuring his trademark single-strap singlet. His arms and legs are reused and he borrows the smooth boots previously seen on figures like Zack Ryder and Alberto Del Rio.

The torso is molded in Lawler's skin tone and black paint is used to finish off the singlet. Most of the other paint apps on the King are reserved for the crown logos on his wrists, tights and boots. He also has an app on the exposed portions of his upper torso to recreate his chest hair.

The King includes two accessories: his crown and his armor/cape piece. The crown is molded to fit on his head a certain way. It's made from two separate molded pieces that are later combined to complete the accessory.

It seems like both pieces are molded in black plastic and later painted the necessary colors. The interior piece that sits on the head has thick white paint on the "furry" brim and on the inside. The "metal" piece has gold paint on it that appears dull, leading me to believe the plastic underneath is black, or at least dark. Blue and red paints are used to color the small jewels that adorn the crown.

The cape/vest is one solid piece molded in red plastic and later painted with black, gold and silver paint. The figure's head fits through the large opening in the vest and a peg secures the belt around the figure's waist.

Even though the vest and cape are stiff, they don't impede any of the articulation (except maybe the chest hinge slightly) and you can pose Lawler however you want while he's wearing it. 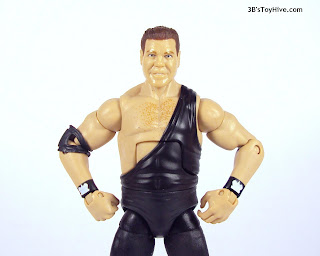 One thing that is clearly missing from the figure is a right elbow pad, which the King often wore during his career and certainly had on during his match at WM27. I borrowed the one in the pic from my Legends Sgt. Slaughter figure because it's the only type Mattel's released with an opening on the inside, but you could probably just use any spare pad you have laying around and it'll look alright on the shelf.

I'm having some trouble deciding which shelf this figure should go on... It's an older version of a Legend so he doesn't fit in with those figures based on Legends during their prime and he's not an active wrestler now so he seems out of place with the current roster figures. I can't help but think Mattel will pump out a redeco with a new, younger head sculpt and probably make him an RSC exclusive. Hell, it wouldn't take much either. They can actually resuse this deco, repurpose the RSC Bret Hart's jacket and maybe create a new crown to go with the younger version of Lawler and- BAM! That'll be $35, suckers! 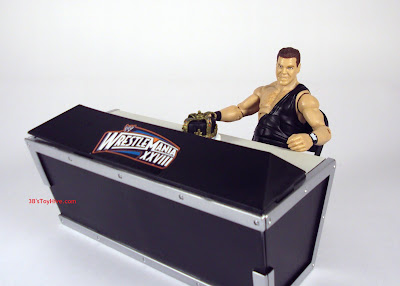 I can't say I'm all that excited about this release. I'd much rather have an early '90s, heel Lawler on my shelf which is the version I remember most, although Attitude-era, horndog Jerry is a close second. I can understand if most fans love this figure, especially considering Lawler's health scare last year. The figure turned out really well (minus the crosseyes), but I'm still waiting for my definitive Jerry "the King" Lawler figure from Mattel.