Welcome to the first installment of "Collector Douchery", a feature that takes a look at some of the depraved lows some collectors are willing to sink down to in order to get their plastic fix. I'll admit this isn't an original idea, if you follow Poe Ghostal's Points of Articulation blog then you're already familiar with his Toy Aisle Trolls posts, which has been running for a few years now.

PG readers submit photos of vandalized toys found in stores, they're posted on the blog and usually accompanied with some "Karmic payback" to deliver some imagined punishment to the troll. I've submitted nearly a dozen or so pics to PG myself since it began and considered having my own feature on the Hive, but have never pulled the trigger on it due to the controversial nature of the content.

I kept (and still keep on) running into this sort of stuff at various toy outlets so I finally decided I'd give it a shot on the Hive and see how the response turns out. I won't copy PG's TAT feature exactly, I'm not as creative in coming up with the titles, nor will I provide a "punishment", I'll leave that up to you.

So here's our first victim: 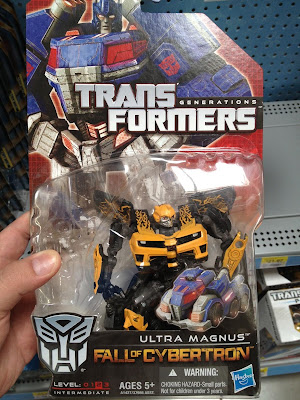 Now, obviously I don't condone this type of behavior, but I can't help think which is funnier: the fact that this douche went through the trouble of doing this, or that the employee handling the return didn't notice that a blue and white toy (clearly pictured on the package) was replaced by a black and yellow highlighted figure. Unfortunately, while this person would surely commit the crime under any circumstances, I think the fact Hasbro is shrinking the toys while raising the prices is a motivator for this type of theft.

Anyway, I won't make this a weekly feature, but whenever I come across something I'll post it just to share some of the silliness I encounter while on "the hunt".