Hello and happy Monday afternoon! I know it's been slow around the Hive for the past week and for the first time ever I'm posting two consecutive addition of the Honeypot, but fear not! A new feature (at least for the Hive...) is debuting this week and will help to fill-in the schedule when things slow down.

Don't worry about things slowing down too much because new products are finally starting to hit my area retail stores and that means more reviews to come! The big news this week is the arrival of WWE Elite Collection series 19 and I grabbed a few higly-anticipated figures from the set while still on the lookout for a sure to be hard-to-find release.

Let's see what we got this week! 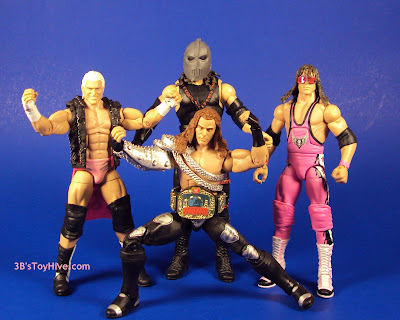 So last Saturday (before the Royal Rumble) I was driving home from work when I decided to stop at my local Walmart to see if they finally received E19. Well, I walked in to the action figure aisle and bingo! There was nearly the whole set, seemingly waiting for me. No sign of Brock or Elizabeth, but everyone else was there with Daniel Bryan being the only double. I picked up the four Superstars they had: HBK, Ziggler & Team Hell No. You may notice D-Bryan isn't listed above. Well after getting the figures home and checking them out, I was a bit disappointed by Bryan's latest release.

He's mostly identical to his previous Elite figures with a new head and retooled lower leg/boots, which is the main issue I have with the figure. I like the costume deco, but I could due without the "YES! YES! YES!" on the legs. The problem with the reworked boots is that now the top of the boots, previously sculpted as part of the lower legs, is not part of the boots, which is fine. However, the new lower leg pieces seem a bit too long and don't allow the knee pads to sit flush against the top of the boots, creating a disjointed "floating" pad and thus messing up the "YES!" text on the shins. I ended up returning him a couple of days later.

Don't get me wrong, he's not a horrible figure by any means, and after thinking about it some I figured I could paint over the text on his legs and maybe do some paintwork on the lower legs, too. Of course by the time I went back to Walmart he was gone. The Wally near my workplace had E19 too, but when I first saw them there they only had Ziggler and Bryan left.

As far as the other figures go, Ziggler turned out really nice. His accessories are perfect! He is a bit too bulky in my opinion, but aside from that a really strong release and definitely the best of the Elite DZs I've seen in person, hence why he's my first Ziggy figure. Kane turned out nice, too, with a new sculpt. Unfortunately he's missing his elbow pads so I took them off the basic figure I purchased a couple of months back. He does have loose hips, but not to the point where he can't stand straight. It's more like the move much more freely than we're used to with Elite figures.

HBK turned out nice, but there are a few things working against him. First up, no knee pads. That's just wrong Mattel. You included them on the Entrance Greats HBK, really wish you could have added them on this figure. Another issue that is also present on other HBK figures: no chest hair. The good news is that those issues can be resolved with a bit of parts sourcing and decals by the1dean70, which I've ordered and am eagerly awaiting.

Speaking of BDITW decals, this week I also received a set for Bret Hart's sunglasses/visor to create an effective pink reflective lense. The set included two decals, precut and ready for you to apply to the accessory. I used one on the RSC Hart's visor because I think it looks more authentic with the pink frame.

If you're thinking of adding one to your own Hit Man figure, I recommend you use a toothpick or similar instrument and start by lining up the decal at the center of the visor, or the part that sits across the figure's nose. This will insure you apply it evenly around the visor.

That's it for this edition of the Honeypot! Check back next week when I should have a few third-party Transformers items and a WWE build-a-figure.

Until then, happy hunting!