Just when I was trying to get into a new writing schedule, Blogger goes and makes some changes to the editing section. Anyway, here are my toy finds for last week. For those wondering when the next review will be up, please be patient, I'm working on a few! 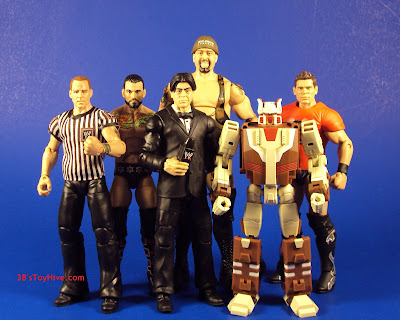 So WWE Elites are still dominating the weekly hauls, but I did get in some new Third Party Transformers items. I wasn't planning on picking up the Toys R Us-exclusive Ricardo Rodriguez wave and thought it was mostly sold out after the holiday rush (save for Miz & Big Show), but during a lunchtime visit to TRU I stumbled upon what appeared to be a fresh case of the WrestleMania 28 series.

I know CM Punk was probably the best seller, but I wasn't too crazy about this attire and the fact he didn't include his "In Punk We Trust" t-shirt which is my favorite design of his. However, there was only one Punk on the pegs, so I decided to grab it. The also had referee Shawn Michaels, which was one I DID want, but wasn't willing to pay the $19.99 price for before. Of course, now I had to pay $21.99 after another TRU price bump. So I grabbed those two on Monday of last week, knowing I could pick up the other two whenever.

HBK actually turned out really nice. I love the fact they added his new wriest tattoo and the removable shirt opens up some future display possibilities. The odd red & green Punk attire is actually starting to grow on me and with a more-or-less WM28 Chris Jericho coming in the next mass-release wave of Elites, I'll be able to recreate their classic encounter from last year.

Speaking of HBK, my order for "The Best Decals in the World" set came in, giving the Elite 19 figure chest hair and heart decals for added knee pads. The chest hair comes on "water slide" decals, which I had mixed results with when I ordered the shoulder tattoos for CM Punk a couple of months back. I finally did get the hang of it, though, and was able to apply them on HBK. I swiped the small round knee pads from one of the Rock figures I had modded (I decided the medium square pads work better for his current look, anyway) and then slapped on the precut, peel & stick hearts on each pad.

I think the results speak for themselves. It's a damn shame Mattel had to skimp on the pads and while the painted hearts on the knees are "passable", I have to say you would do the figure a disservice by not adding the BDITW stickers. 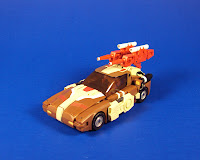 My first BBTS order of 2013 came in and it included the first in FansProject's new Function X series, an homage to G1 headmaster, Chromedome, dubbed "X1: Code." This is a really cool figure, not as awesome as Steel Core and there is a less obvious anime influence, but the way CODE transforms is really ingenius. I'm not a big enough headmaster fan that I'll need to collect all of them, but I really like Chromedome's character in the current More than Meest the Eye comic book, so this was a must-have.

Also he was part of a special holiday promotion that had BBTS donating $20 worth of inventory to Toys for Tots with each preorder of Code, so I was happy to participate.

The other item that shipped in the BBTS order was an upgrade kit by Mech Ideas allowing you to convert "Reveal the Shield" Special Ops Jazz into an Alternators-inspired Shockwave. This appealed to me because I picked up the Fall of Cybertron Shockwave as my classics version of the character, but with his small stature, he just didn't fit-in correctly. I love the RTS Jazz mold and Mech Ideas included a sticker sheet to add purple to the mostly white figure, however, I'm planning on doing a little bit of painting before added the decals and that's why I've only included a picture of the package for now.

Once I committed to the idea of completing Ricardo Rodriguez, I returned to TRU to pick-up the other two figures needed to assemble ADR's ring announcer, Miz & Show. You may remember I picked up a loose WM28 Big Show from eBay a few months ago, so I wasn't exactly excited to buy him at retail. Luckily my TRU rewards coupons came in and I was able to get $5 off the purchase. I took a ride to my local TRU to pick-up Miz with the second coupon.

Miz's face looks really weird on this release. And I don't care for the "Team Johnny" t-shirt. It looks like he's wearing shoulder pads when you put it on him. The attire looks good, though, and a simple head swap with his Elite 9 figure gives you a nice alternate version to display. I may end up keeping him, although he was on my shit-list for nearly crippling CM Punk at a house show last weekend. He redeemed himself by allowing Antonio Cesaro to repeatedly smash him against the barricade on RAW. The AC's attack begins at the 2:20 mark.

So, how did Ricardo Rodriguez turn out? Well, as good as a figure in a tuxedo could turn out. One thing I was not happy about was the painted hands. They were molded in black plastic and the skin tone is painted on so thick it makes his hands look wrinkled. I solved that by swapping his hands with a spare figure that had a similar skin tone.

That's it for last week's Honeypot. This week's haul should be posted on the regular Monday schedule.

Until then, happy hunting!