Past week's been busy and I've realized my current work schedule (08:00-18:00) keeps me from writing during my "peak" hours. I'm still trying to work out a way to get things done when I'm home while still spending time with my family. Unfortunately the way things are right now my work day's gone from 10 hours to 12 and a half due to rush hour traffic! By the time I get home on work nights and have dinner, I'm just too exhausted to sit down and write which causes me to become discouraged on my off days and avoid posting altogether, instead focusing on tinkering with my figures and displays.

Anyway, I still managed to find some great figures this past week, check them out! 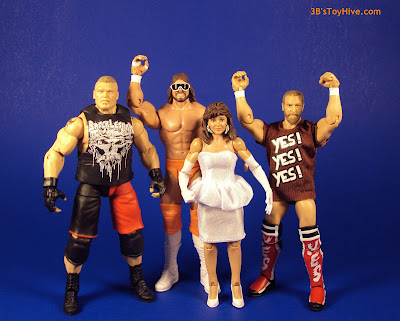 Things kicked off last week when I was scheduled to work at our old facility on Tuesday. There's a Target nearby and I've been reading about collectors finding Miss Elizabeth in the Elite 19 cases Target was receiving. I took a drive over there during my lunch break and found a fresh case of E19 on the pegs with one Elizabeth available. Her package was a bit crumpled, but otherwise she was find. They also had the latest "WrestleMania Heritage" wave (minus Kane) so I picked up Macho Man.

I don't collect WWE Basics, but this version of Savage reuses the NWO Macho Man's headsculpt which features his trademark grin, but with brown hair and beard.

It's a way better expression for Macho and I had to have it for my Legends figure!

A few days later I went into my local Walmart and saw a new case of Elite 19A (the non-Elizabeth case) on the pegs. It was my chance to redeem myself for returning Daniel Bryan a few weeks ago, so I promptly grabbed him, but contemplated adding Lesnar to my collection for a while. He looked to good in-store, so I decided to give him a shot. And I'm glad I did!

I don't care for Lesnar wearing MMA gear in a WWE wrestling ring, but the figure is just great. He's a bulky, threatening monster and probably in the top three best figures in the wave. That's saying a lot with awesome versions of HBK, Ziggler and Kane in this series. I wish I still had the UFC Deluxe figure for comparison, but alas I sold him off last Summer.

I was looking into ways to customize the E19 Brock into a Flashback version of himself, but decided to wait for an official release which I'm sure will come soon thanks to Lesnar's recently-announced contract extension.

Finishing off the week's haul was my most recent order from Best Decals in the World which was a repeat order of CM Punk's "COBRA" & "Pepsi" shoulder tattoos. The first set I ordered a few months back mostly went to waste except for the last pair of decals. By then I finally got the hang of it.

So obviously I needed to order more to redo them on my other Punk figures.  Of course just a day or two after placing my order BDITW unveiled a new set that also includes the "SPITFIRE" text Punk has above the cobra logo. There aren't any available as of this writing, but if and when they become available again, you can bet your ass I'm going to order some! In fact, I haven't applied any of the cobra tattoos, yet. Waiting to have the spitfire decals in hand for proper placement.

Well, that wraps up another installment of the Honeypot! Looking ahead to next week, nothing new has come in to the Hive, but I am awaiting my first order from Ralph's Figure Clothing which will include a highly-anticipated CM Punk t-shirt that Mattel couldn't deliver in the Elite series along with a couple of other items. I'm also on the hunt for the newest wave of the TRU-exclusive "Best of PPV" Elites which includes Christian with the current Intercontinental title belt and I may just have to snap up a Fall of Cybertron Grimlock if I come across it.

'Til next time, happy hunting!