Greetings! And welcome back to our second edition of Collector Douchery, spotlighting douchy in-store acts of toy theft/vandalism. I mentioned in the debut post (last month, FoC Ultra Magnus) that I, seemingly, regularly send in a photo for Poe Ghostal's Toy Aisle Trolls feature. Well, this past week TAT featured one of my submissions. Hit the link to check out the original post, or "SWARM" for additional info.! 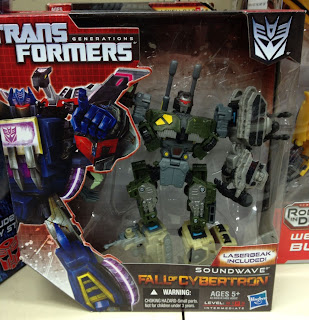 This was part of a double dose of douchery at that particular store that day. The second will surely be posted soon, but in the meantime we have this doozy. Just to give you an idea of when this was found, it was the week after Christmas and was, to my knowledge, the first time the Generations FoC voyagers had been stocked at that store. This douche apparently worked quickly to swipe SW as soon as it hit the shelves.

For those unaware, the Power Core Combiners line pretty much failed miserably at retail in 2010/11 where the 5-figure sets retailed for $19.99 - 24.99, but sold much better at the secondary stores like Ross or Marshalls, around $13 or so. During the holiday shopping season of 2011 Walmart actually had a package deal where you'd get a 5-pack with a 2-pack stuck to it all for $10! The only one I was ever interested in was the Grimstone and Dinobots set.

I assume that's where this douchebag obtained the Bombshock figure from. Stowing it away for just such an occasion. Pre-meditated douchery... the worst kind of douchery.