This week in the Honeypot are a couple of firsts for the Hive: my first Voyager class figure from the Fall of Cybertron subline of Transformers: Generations and my first order from Ralph's Figure Clothing!

The items below were good enough to assure some future purchases, so jump ahead and take a look! 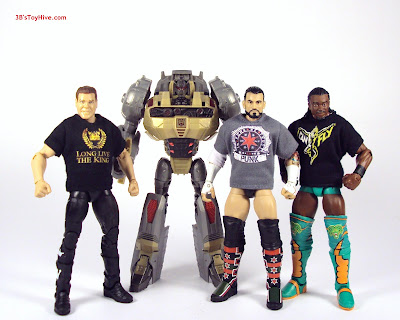 First up is Grimlock, king of the Dinobots! Man, I've been itching for a big Grimlock toy for over 20 years and finally I have one! The last time a T-Rex alt-mode Grimlock showed up in stores was about seven years ago and it was a Deluxe class figure. I wasn't collecting TFs back then, but when I started assembling my classics collection in 2011, that wasn't a toy I was willing to spend a lot of cash on. I waited patiently, then last year word came that we would see a new Grimlock based on his appearance in the FoC videogame.

I found mine at Toys R Us, but later spotted him at my local Walmart, too, so he seems to be hitting everywhere now. I'll cut to the chase, he's far from perfect and his dinosaur mode leaves a lot to be desired, but the robot mode looks fierce and I feel it's a great update. He's tall and looks menacing thanks to his wide chest and bulky arms. Definitely a must-have for fans of the Dinobot leader. 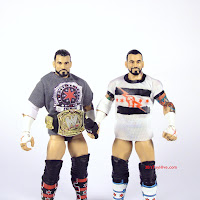 Next up is my first order from Ralph's Figure Clothing. The company specializes in premium-quality attire for your wrestling figures. Not just Mattel's WWE, perusing the webstore reveals mostly Jakks Pacific-sized clothing.

I've been hitting the Wfigs forum a lot lately, mostly lurking to see what people are finding in stores and thoughts on current and future releases, but I kept seeing custom clothing on figures which was always credited to "Ralph's". I did a quick search on Google and found the website and in the current landscape of cost-cutting and accessories being dropped, boy was I excited at the possibilities this store could offer.

Mattel's stated that cloth attires are very expensive to produce, leading to molded pieces and some cost-cutting on paint decos. This is especially problematic for future CM Punk figures since he continously adds more bodyart to go along with his colorful ring gear. I wonder if that's had any influence on his recent trend of sporting all-black boots? Hmm...

Anyway, back to the items from Ralph's.

I wanted to sample a few items before I went nuts and ordered a bunch of stuff. At the top of my list was Punk's "In Punk We Trust" t-shirt, which was unfortunately misssing from his WrestleMania 28 figure. Another wrestler that was in need of a shirt was Kofi since his Elite 17 figure only included a title belt. And finally, I wanted some alternate attire for the King so he can look more casual sitting at the commentators' table. The whole order was just under $30 after shipping and took about a week and a half to arrive.

I'm happy to say the quality is good, better than even Mattel's t-shirts and fit the figures better, too! It's a little pricey, but if you want to put your figures over the top and have some options for the display, it's worth giving a try. I already placed another order for a few more t-shirts and a coat.

That's it for this week. Tune in next time to see what is new at the Hive!