The Honeypot: Transformers & a Rumbler!

This week in the Honeypot I share two brand-new Transformers figures my sweetie picked up for me while we were shopping and I find a WWE Rumbler of my favorite active WWE Superstar in the clearance bin! 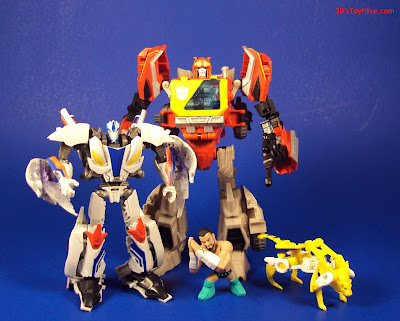 I had a rare weekend off at the beginning of the month so my girlfriend, daughter and I did a little shopping together which we rarely do. Among the usual household items at Walmart I found two new TF figures: Blaster from the Generations line and the first-ever Deluxe class TF: Prime Smokescreen (in the US, at least) from the Beast Hunters series!

The toy aisle at my local Walmart seemed to have just been restocked with the latest wave of TFPBH (series 2), which contains Smokescreen. This is the first Beast Hunters figure I pick up and fully anticipated a very simplistic toy like the previous Prime toyline, "Robots in Disguise." To my surprise Smokescreen here is more along the lines of Knockout and features a more complex transformation process.

Unlike the other figures in TFPBH, Hasbro smartly made Smokescreen's "beast armor" completely removable, giving us a version that looks just like the on-screen character. Fans who were expecting (or impatiently imported) the Takara Smokescreen repaint of Knockout will be happy to know that this is a completely new mold and unique to Smokescreen. 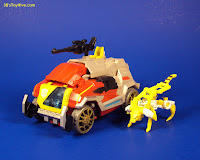 My other TF pick-up this week was the Fall of Cybertron "Autobot" Blaster from the second wave of Generations voyager-sized figures. He's a remold/retool of the first wave's Soundwave & Soundblaster. I skipped those figures because I have the War for Cybertron deluxe class Soundwave and I wasn't convinced by reviews of the FoC release, but just like the other series 2 figure, Grimlock, I NEEDED a Blaster for my collection so I grabbed him. I'm really glad I did, too, because he's a great figure. Although, I should point out that the data-disc gimmick doesn't work very well.

The figure comes with Steeljaw, but you can pick up the rest of Blaster's entourage in mini-figure two-packs. I was planning on picking up the set with Rewind, but after messing around with Steeljaw, I don't think I'll be buying any of them. Blaster himself is lots of fun. He feels just like an upscaled version of that WFC Soundwave, with a few adjustments, but he looks great and I love the expression on his face. The colors pop and he's a nice update. He is big, though, and that may turn off a lot of fans, but you should definitely pick him up if you see him and give him a try.

Finishing up my pickups this week is a CM Punk figure from the Rumblers line. He was on clearance at Kmart for $2.49 along with a lot of other single-carded Rumblers. They should have been selling these at that price from the beginning, or fifty cents cheaper. At $3.99, I know why they didn't sell. Anyway, I thought he would be a nice mini-figure to display under my PC monitor.

There were two other purchases this week, but I ended up returning them. They were the Marvel Universe "Classic Avengers" team pack and Yellowjacket. They were nice-looking figures, but Thor's hand broke off while I was testing his aritculation. Then I started working on a new Marvel Universe display and discovered how annoying and frustrating it is to pose some of the figures with less articulation. I decided that maybe I'll downsize my MU collection and start picking up Legends again. I like the new hip articulation used on "Heroic Age" Captain America and upcoming Wolverine & Archangel figures, so I'll give ML another shot.

That's it for this week, tune in next time for what promises to be the largest score of 2013 to-date!