Welcome back to the Hive for another edition of The Honeypot! This time around I'm covering a two week span that includes my largest weekly hauls for 2013 thus far and probably the most diverse group of toys I've picked up in the past six months. Interestingly, it showcases the (probable) conclusion of one toy line while featuring the reemergence of another on my shelves. 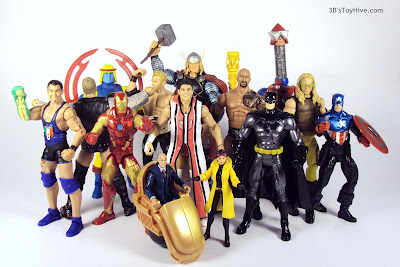 I'm going to break the list down by toy line instead of the usual order of pick-up to make things flow a little easier.

WWE
I stopped at my local Kmart to see what was new on their shelves which was not much, but they had reorganized the action figure aisle... what's left of it, anyway. There I found The Rock from Elite series 16, who I skipped several times, but eventually decided to get him and use him as my "modern era" Rock. I have other plans for the series 14 figure... More on that soon!

Speaking of plans, I read on the WFigs boards that the "Defining Moments" Bret Hart figure was appearing at ROSS stores, so while I was shopping for a new dress shirt at my local store I walked over to the toy dump area where lo and behold there sat a lone Hitman figure. I picked him up for $9.99 plus tax. No the reason for the spare Hart figure is two-fold: first, the extra jacket is going to my Legends Piper figure and second, once I purchase a spare RSC Hitman, I'm going to swap their torsos and add a few other bits to create a couple of different Hitman figures.

Basic Rhodes & DHS are a couple of other figures I picked up for parts. With Rhodes I'm planning to do an arm swap on the Elite version which has huge arms that seem way too big for Cody.


I've never been a big fan of Christian and actually didn't own any of his figures until this haul, which ironically led me to purchase two of them. The first was the "Best of PPV 2012" version which is the first figure to include the metallic version of the current, white-strapped, Intercontinental Championship making it highly-desirable. 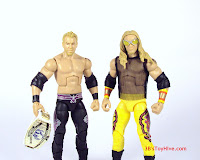 Like I said, I've never been a fan of Christian, much less his post "Two Cool Dudes" persona, but the combination of the new belt, the fact he's not a figure I already had, and a TRU coupon for 15% off any purchase, made him an easy purchase.

The big news is that I found Elite series 20 at the "uptown" TRU, where a whole case was hanging on the pegs! This particular store bumps prices up on regular Elites to $19.99, but I asked the cashier to price-match them to the TRU website which lists them for $16.99, saving me ten bucks on the four I picked up: Rhodes, Chris Jericho, Santino and "Flashback" Christian. I'll tell you right now, Christian may be the best in the series and easily in contention for my favorite Elite figure of 2013. He turned out great! Be aware there is a running change to his sunglasses, though. The one I picked up has the translucent lenses. The other one has painted lenses.

The other three figures are similarly awesome, except for Santino. I think Mattel copped out by reusing the same attire his first Elite figure had. I'm glad they gave him new head & lower legs, but it really feels like double-dipping here. Also note this release loses the chest tattoo, but gains the inner left arm tat. The cobra sleeve turned out really nice, so he's not a horrible release.

Marvel
Earlier in the month I decided to put up a new Marvel Universe display in the same fashion I display my WWE figures. That led to the realization that displaying them on those spice racks is ultimately useless because the figures that end up in the last two rows seem insignificantly tiny. I think the MU figures work best as part of a diorama, an action scene like the one I had using the Helicarrier a few months back or on a "shallow" display area, like the small wall-mounted shelves I use.

For the "line-up" style displays 6" Marvel Legends are the clearly the best option, however, I've never been a huge fan of the ML style bodies and a lot of them have very wonky articulation. On the plus side, the newer body styles are a lot better and actually on par with the WWE Elite articulation model. When I decided to jump into the 3 3/4" realm last Summer, I decided to purge my ML collection. Big mistake, but not a huge one. Most of the figures I had were the old-style figures. I decided I was going to begin collecting the 6" figures again, but mainly focus on modern interpretations of heroes.

To that end I placed an order on Hasbro Toy Shop for "Heroic Age" versions of Thor, Captain America and Iron Man, along with Deadpool in his X-Force outfit. Thor is MASSIVE. I never picked this one up during it's initial retail release, unlike Bucky Cap, who I eventually sold off, although I felt he was a great figure. "Bleeding Edge" Iron Man comes from the Iron Man 3 spin-off series of ML and I must admit is probably my favorite IM figure... EVER. He turned out really well and if you have (and enjoy) the MU version, you'll do yourself a huge favor by grabbing this one.

I didn't include Deadpool in the picture because he's still in package and I'm not exactly sure if I'll be keeping him. It's contingent on whether or not I find other X-Force figures in 6". The figure I'm really eager to find is the Archangel which just looks amazing! Although I've seen some of his wavemates at TRU, no luck finding the winged warrior, yet.

I'm not quitting MU completly, though, especially when it comes to modernized versions of the X-Men. I found Prof. X and Jubilee at the Walmart near my job and was happy to add them to the collection. However, my overall plans for the four inch Marvel figures have changed and I won't be picking up as many as I originally planned to.

DC
My first DC figure in months came in the form of the "New 52" version of Batman from the Batman Unlimited line. I haven't had a lot of interest in the new DCU, but Batman was one of the titles I followed through it's first arc and actually plan to continue reading. Inspite of Jim Lee's horrid designs, the figure turned out really nice, easily the best out of the Justice League redesigns. I don't think I'll pick up the rest of the team, but I may if I find them during a sale. I did run into Wonder Woman last week and was very unimpressed by her.

Is there a "Hot Wheels" newsletter I can subscribe to? Or does anyone know a good site for HW news? If it wasn't for me taking a stroll through the diecast vehicle aisle I would never have known about these awesome new releases! I've been searching for a 1:50 scale K.I.T.T. forever, but wanted to avoid eBay prices. Well, this latest release is done in the "deluxe" style with more painted details and rubber tires. The same goes for the Mystery Machine which is a huge upgrade from the standard release from last year.

The deluxe MM gets two-tone wheels with rubber tires. It also has front and rear paint apps and painted roof racks, giving us the best version of Scooby-Doo's preferred mode of transportation. I also like that the package art is specific to each property. There was a 1960's Batmobile available, too, but at $5 a pop I didn't think it was worth replacing the standard release I already had, although the deluxe release has rubber tires and clear windows as opposed to transparent blue.

MotUC
And finally we come to Masters of the Universe Classics, a toyline that despite Mattel & Digital River's best efforts to sabotage, has endured thanks to the dedication of fans. Not me, though, I always cherry-picked the line, so I'm considered worthless in the eyes of Matty.

However, I've managed to obtain most (never picked up Roboto or Fisto) of the figures I ever wanted and actually sold off many of the ones that just didn't fit into my collection. That said, I felt I was pretty much done with the line, especially considering how expensive and insanely difficult it's become to purchase "day-of" releases. I began setting up a new MotUC display on the hutch over my desk when I noticed how lobsided the battle between good and evil was. I had more evil Masters than heroic ones. I decided I needed at least two more heroes for my collection. 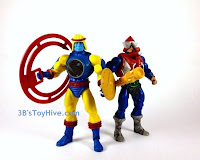 Fisto was one I always wanted but failed at obtaining last year and he's just way too expensive on the secondary market. Roboto was a figure I wanted, too, but the issues with his shoulders and later the reported torso breaks, kept me at bay. I considered Moss Man, but he seemed a little too pricey at this point. I snooped through Amazon, eBay and Big Bad Toy Store, ultimately deciding on Sy-Klone (on sale for $25) who I thought looked cool and was fond of as a kid and Mekaneck who I really had no interest in until I read some reviews.

Much like his vintage version, Sy-Klone is just an all-around fun figure. He has that perfect blend of four-color superheroics and retro sci-fi goofiness. Mekaneck is the one that surprised me. The reviews I read really influenced my decision in ordering him. He really won me over once I got him in hand. I wish his neck extensions were flexible, but overall he has a very cool look and like the rest of the heroes on my shelf, has a look all his own.

While there are several more cool-looking MotUC figures coming down the pike, I think I'm pretty much done with this line. I just don't care to deal with Matty Collector any more and now that they've lowered production numbers (supposedly), it's harder/more expensive to get from secondary retailers. I'll admit I'm really interested in next month's Snake Face figure and I would like to have Larfleeze from the DC line...

Time will tell if Sy-Klone & Mekaneck really are my last MotUC purchases, but it looks like it for now and that's fine with me. I'm not a slave to the mythology, so I don't have to have every figure or the majority of figures.

Anyway, next week look for one or two more 6" comic figures to make there way in and my latest order from Ralph's Figure Clothing!