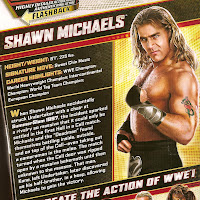 You wouldn't know it because of the Hive, but series 19 of Mattel's WWE Elite Collection is possibly the best overall wave in the entire line! Now that I've picked up all six figures in the wave, I'm turning my attention to getting them reviewed and kicking things off is the best figure in the series, "The Heartbreak Kid", Shawn Michaels!

Okay, so me calling him the best is obviously subjective and just my opinion, but I will say he's my favorite of the bunch. However, that's not all Mattel's doing. A big "thank you" is owed to Best Decals in the World for their phenomenal decal sets that allow you to give HBK his knee pads and chest hair. Without those upgrades the figure would be lacking in the authenticity department.

Let's see how Michaels turned out! 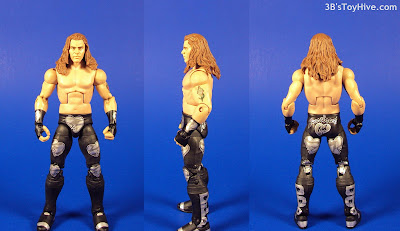 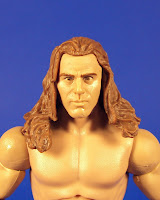 This version of HBK is based on his appearance at Badd Blood: In Your House where he faced the Undertaker in the first ever "Hell in a Cell" match. That match is also notable for the debut of the Undertaker's brother, Kane. To create the figure Mattel only needed to sculpt a new head, the body is made from existing pieces.

The head scan does a nice job of capturing a meaner, much more arrogant (if you can believe that) HBK with long locks. The hair is molded in a reddish brown plastic and gets the job done, although it may benefit from some blondish highlights to make it more accurate. I'm not sure if many casual wrestling fans would immediately recognize the figure as Shawn Michaels. Truth be told when I saw the first pics of the figure, the hair color kind of threw me off a bit.

E19 HBK reuses the same torso previous Elite Shawn figures have used. I didn't take the time to compare, but it seems this version uses slightly larger arms. The lower body is made of the sculpted tights legs and the kickpad boots, all of which is molded in black plastic.

Paint apps for Michaels is limited to black, silver and grey. The black is used for his hand wraps. The other colors create the broken heart graphics on his forearms, tights and boots. I didn't have noticeable paint issues on my figure and inspite of some reports I've read on the forums about missing apps, none of the other figures I've seen in stores have had any problems. The hearts on the forearms were resized, I'm guessing to avoid having to apply them over the wrist joints. Not a major issue, but worth mentioning. 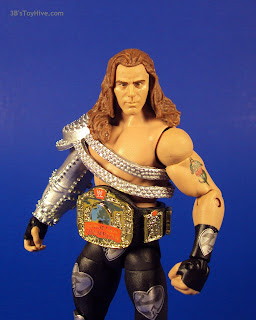 HBK includes three accessories: the two-pieces that make up his entrance attire and the debuting European Championship title belt. The "shoulder piece" as it's referred to on the package consists of the strapped shoulder pad and a sleeve for the figure's right arm.

The two sections don't actually connect to each other. The shoulder pad just sits above the sleeve. The actual pieces HBK wore at the event were black leather covered in studs, something lost on the figure since the shoulder piece is completely painted in silver.

Removing the shoulder pad requires you to work it over the figure's head and left arm. It's made of soft, rubbery plastic so it has a bit of give. The top strap isn't as large as the lower strap so it's the harder of the two to work with.

The sleeve ends up being the worst of the accessories. It's made out of the same rubbery plastic as the pad, but it's too stiff to allow for proper movement from the right arm, so no "HBK pose" while he's wearing it. 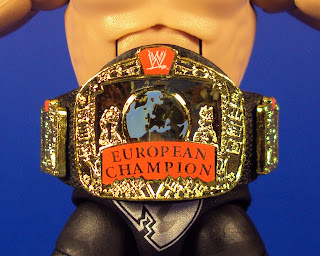 "Badd Blood" HBK also includes one of my all-time favorite WWE title belts: the European title. This is the first time Mattel releases the Euro title, but I've been waiting for it since Legends series 3 British Bulldog. While it does not disappoint, I do wish they could have figured out a way to paint the flags that border the globe on the center medallion. The various countries' flags on the belt is my favorite aspect of the title. 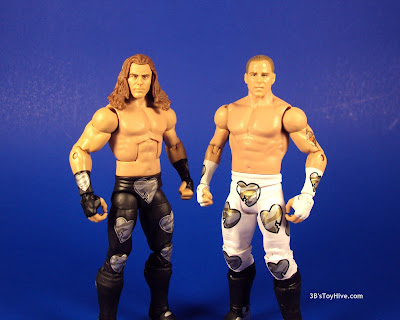 I can't say that this specific version of Shawn Michaels is one I was clamouring for, but I'm happy to add his Attitude-era incarnation to the collection. Now that Mattel's given us this figure, debut Kane and The Cell playset, the only thing missing to recreate that night is a "Badd Blood" Undertaker, which I have been eagerly anticipating since Mattel started their WWE line.

There is one big complaint I have about E19 HBK and that's the fact he's missing his knee pads. The omission comes as an obvious cost-cutting measure since his Entrance Greats figure had them, but it's a shame Mattel didn't include them.

However, there is a way to fix that... 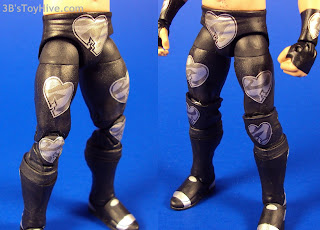 Figure customizer "The1dean70" offers up a set of peel and stick knee pad decals on eBay that help to complete you E19 Michaels figure. The only thing you need to obtain are the small, rounded knee pads which come on figures like Terry Funk, Stone Cold Steve Austin and Mason Ryan. In the case of SCSA, he should really be using the medium-sized pads, anyway, so he's a good source for obtaining the ones HBK needs if you have Austin. 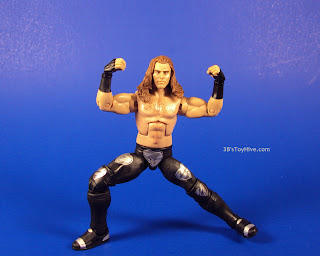 BDITW also offers a water slide decal that gives HBK his missing chest hair. I don't know if Mattel's ever addressed the reason for omitting the hair app on HBK figures. They done it for Jake Roberts, CM Punk and the Brain Busters, so why not for HBK? Anyway, with a little patience I got the hang of applying the water slide decals and now I can display the Heart-Break Kid proudly!