As part of the League of Extraordinary Bloggers' discussion topic, Birthday Celebration, back in February, members were asked to include three ideas for future topics. One of my suggestions is this week's assignment: Sleepover!

You have the opportunity to spend the night at any residence in pop culture. Where do you go?

I'm pretty sure I had something in mind when I came up with the topic, but I can't remember what it was... There are so many places I'd love to spend a night at: the Baxter Building, the Fortress of Solitude, the Museum.

But what if I could visit someplace that is a temporary residence, where many people stay while on-duty...

April's almost over and I thought now would be a good time to post a new edition of CoD. Mattel dominates most of the display area with WWE, DC Universe and Masters of the Universe, but Transformers and a few random figures squeezed in, too.

I'm trying to enjoy my office as much as possible right now because in a couple of months it's getting sacrificed to make room for the baby's nursery, so this will probably the penultimate edition of CoD featuring the office display. For those worried I'll be losing my displays altogether, fear not, my desk and bookcases are moving into the master bedroom. It's going to be a bit cramped for awhile, but at least I'll still have somewhere to set-up my stuff.

Enough that for now, though, let's take a look at the shelves!

I'm skipping the Honeypot this week and bringing a new edition of "Collector Douchery". Just in time for Iron Man's high-flying return to cinemas this edition of CD focuses on the aftermath of someone who has to "have them all" in their collection and how far they're willing to go to do so.

I can't believe it's been two months since my last League of Extraordinary Bloggers post. But fear not as there's no time like the present to jump back in! This week's topic:

"You never get a second chance at a first impression–what moment in pop culture had you saying “Now, that’s how you make an introduction!”

Well, for me, the most memorable introduction belongs to the Dark Knight!

In the past year the WWE's Divas division has undergone some major changes. Prior to the return of the Bella Twins a couple of months ago, there were only about ten or so active Divas on the roster. Gone are the biggest names of the last few years: Beth Phoenix, Kelly Kelly and Eve, leaving the roster wide open for an up-and-comer to hog the limelight.

Cue one miss AJ Lee, who has entered the fray and stolen the hearts of WWE fans and comic geeks alike. AJ's demonstrated some versatility in her on-screen persona, playing a carefree, pixie-type nerdy-chick one moment, then switching to a double-crossing vixen seductress the next. Currently she has a good mix of both personas going as the girlfriend of newly crowned World Heavyweight Champion, Dolph Ziggler.

With her first Elite figure set for mass-retail release in the next month, I thought it would be a great time to cover her debut figure, which came out last Fall. Let's take a look!

This week's Honeypot was a small haul, but the price-per-figure was one of the highest in recent memory. I ran across several long-awaited releases and for the first time in nearly a year, no WWE purchases!

What could I possibly have in the 'pot this week?! 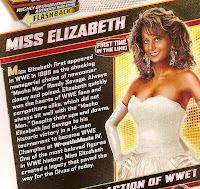 Since Mattel's announcement in 2011 that a Miss Elizabeth figure would be coming, she's gone from a Matty Collecotor-exclusive, WWE Legends figure to a hard-to-find Flashback release in the regular retail, WWE Elite Collection series. And all this time we've just been chomping at the bit to display her with our Macho Man figures.

Well, the time has finally come and if you were patient, you were (ideally) able to find her at a store without the ludicrous secondary market prices!

Is she a worthy addition to the Elite line or an expensive accessory for your Randy Savage action figure? Prepare youself for some Mattel logic and find out after the jump! 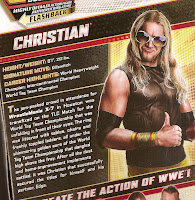 WWE Superstar (and one-time TNA wrestler), Christian, gets his first "Flashback" figure in only his third Elite release. I've never been much of a fan, but I did enjoy his time as Edge's tag team partner and since I already had Edge's Flashback, this was a must-have for my collection.  FB Edge took a few missteps, but was overall a nice rendition of the Superstar's Attitude-era incarnation.

How does Christian's throwback figure fare?

The Honeypot: The Birdman, WWE & 2nd order from Ralph's!

Today's edition of the Honeypot covers another two week span, although not as massive as the previous enstallment there were some big pickups nonetheless! Let's jump into it! 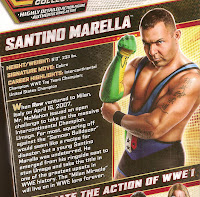 Today I'm reviewing two figures: one is from an early wave of WWE Elite (series 3) while the second is from the latest wave to hit retail stores (series 20), both are Santino Marella. Interestingly these are the only Elite figures Santino has received and they came seventeen waves apart, but more surprising is Mattel's choice to basically reuse the same attire on the newer figure.

There are a few sculptural changes to the E20 figure to get him up-to-date with Santino's current look and the addition of an "iconic" prop of his. Will this latest Marella easily replace the first version? Find out!