I'm skipping the Honeypot this week and bringing a new edition of "Collector Douchery". Just in time for Iron Man's high-flying return to cinemas this edition of CD focuses on the aftermath of someone who has to "have them all" in their collection and how far they're willing to go to do so. 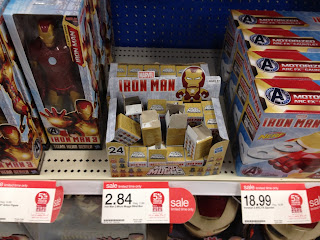 I don't really understand the appeal of the "blind bag" mini-figures that seem to be clogging toy aisles these days (LEGO, Marvel, DC, Halo. Take your pick). Personally, I like to know what it is I'm buying BEFORE it's purchased, but to each his own. Anyway, some loser (or losers) didn't feel like buying a bunch of mini Iron Man figures unless they knew which characters were inside, so they decided to tear open a bunch of the little boxes and peak inside.

Not sure if the same douchebags were the ones who outright stole a couple of the mini-figs or if someone else did, but a few of the boxes were empty. I think these regularly retail for $3.99 at Target, but they happened to be on sale that week making this all the more douchey.