This week's Honeypot was a small haul, but the price-per-figure was one of the highest in recent memory. I ran across several long-awaited releases and for the first time in nearly a year, no WWE purchases!

What could I possibly have in the 'pot this week?! 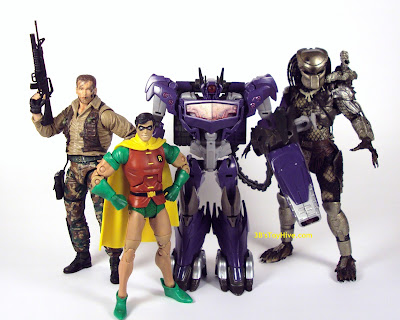 First up is 'ol one-eye... The big, bad, calculating, Decepticon scientist known to Transformers fans since the days of Generation One. None other than Shockwave! Unlike the miniscual Fall of Cybertron version I picked up last Fall, this Beast Hunters release is a Voyager-sized figure and he's on the larger side, too. I found him at my local Target store while doing some shopping with my girlfriend. I wandered into the toy aisle (as I normally do) searching for, I can't remember exactly, but the last thing I expected to find was Shockwave. There was only one on the shelf and I immediately grabbed him.

His robot mode is a great interpretation of the in-show model, but the alternate mode is kind of crappy looking. I don't expect to display him in vehicle mode much, so it really doesn't matter. This particular Target still sells the TFP voyagers at $19.99, so I paid what I expected to for him.

Last weekend I had some free time after work, so I decided to take the drive up to Tate's Comics where they were holding their anniversary tent sale. I didn't find anything of interest in the bargain bins under the tent, but inside the store they had lots of new stuff. That's where I found the latest wave of NECA's Predator line. The had all three figures from the series: two versions of Major Alan "Dutch" Schaefer (as portrayed by Arnold Schwarzenegger) and an improved-articulation version of the original Predator. 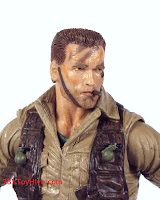 I decided on his "Jungle Extraction" look because it captures Schwarzenegger chomping on a cigar and includes an M-16 rifle, pistol, knife AND machete. Plus, the next wave will include two more versions of the hero: "Jungle Encounter", which I feel is the most iconic look, and "Jungle Disguise", capturing the "final battle" look of the character. If I can find the Predator two-pack with the unmasked monster, I'll surely pickup "Disguise" Dutch, but I'll probably buy the "Encounter" figure either way.

And capping off my haul this week was a "replacement" figure of sorts. It's old-school Dick Grayson as Robin from DCUC16. When that series hit roughly two years ago, I ordered the entire wave (in order to build the "C&C" Bane figure), but ended up with the Golden Age Robin. I never ran into the Super Powers version at retail and I thought I had sourced a head, but that never materialized, so I was stuck with "bandit" Robin. 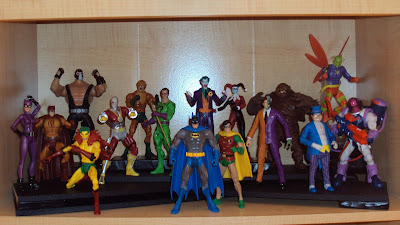 Well, a couple of weeks ago I set up a new Batman display with his rogues gallery standing behind him and I thought to myself, "the only thing missing is Robin standing next to Batman!" I decided then and there to hunt down the correct Boy Wonder figure to go with my Silver Age "Detective" Batman. I searched eBay and the best deal to be found was one with a broken left ankle shipped for $22. That was good enough for me. Once he came in all that was necessary was a quick head swap and- BANG! There he was, standing tall next to the Dark Knight.

And with that we finish another edition of the Honeypot.