In the past year the WWE's Divas division has undergone some major changes. Prior to the return of the Bella Twins a couple of months ago, there were only about ten or so active Divas on the roster. Gone are the biggest names of the last few years: Beth Phoenix, Kelly Kelly and Eve, leaving the roster wide open for an up-and-comer to hog the limelight.

Cue one miss AJ Lee, who has entered the fray and stolen the hearts of WWE fans and comic geeks alike. AJ's demonstrated some versatility in her on-screen persona, playing a carefree, pixie-type nerdy-chick one moment, then switching to a double-crossing vixen seductress the next. Currently she has a good mix of both personas going as the girlfriend of newly crowned World Heavyweight Champion, Dolph Ziggler.

With her first Elite figure set for mass-retail release in the next month, I thought it would be a great time to cover her debut figure, which came out last Fall. Let's take a look! 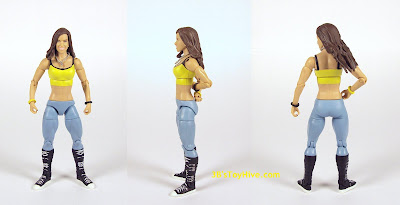 AJ utilizes an all-new female sculpt, very specific to her body type, although some liberties have been taken in converting her into an action figure. She's petite and smaller than most of the previous Divas, but the design team was rather generous to her in the bosom area. The expression makes her face look odd. I don't find AJ to be the prettiest Diva, but she's definitely not ugly and the sculpt just doesn't do her any justice.

They went with an odd choice for her attire. It's not bad, just not as popular as her plaid attires or even her helplessly-devoted-to-[insert Superstar name here], ripped-up black top and jean shorts look, which is the version I really want on my shelf. On the plus side the simplistic attire makes it easy for Mattel to produce and there wasn't much they could screw up. 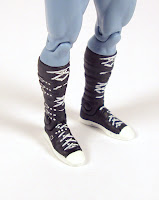 I will point out that I'm impressed at the fact they sculpted all-new boots for her, too. The paint accentuates the details, but all the straps and buckles are sculpted. The designers used white paint for the soles, toes and laces, then silver paint for the buckles and some of the studded details.

It's safe to assume we'll see these same boots on her Elite figure, which is a bit of a bummer considering Miss Elizabeth was given enclosed ankle joints.

The Divas make up the only portion (except exclusive/limited waves) of the Basic series that features separate costume accessories. AJ includes her lightning strike necklace and bracelets. You would have to pop off her head and hands in order to remove those items, but I'm glad to see Mattel toss those in on the "bargain" figures.

The necklace is nicely detailed. The ball chain is probably a little thicker than it should be, but Mattel's attempts at necklaces usually turn out that way. The lightning strike charm is sharp and the silver paint on the entire piece was applied neatly. Surprisingly, I did not see any rub marks on the figure's skin.

Articulation is the standard Divas model: ball-joint neck and hips, swivel/hinge combo at the shoulders, swivels at the waist, biceps, wrists, thighs and calves, with hinges for the elbows, knees and ankles. Instead of an "ab crunch", AJ (and other Divas) have a pivot joint that allows for some good side-to-side movement, but is limited in the forward and backward directions.

While this is fully on-par with what I expect from a Basic series Diva, I know this will be the same build on AJ's Elite figure and that's disappointing. 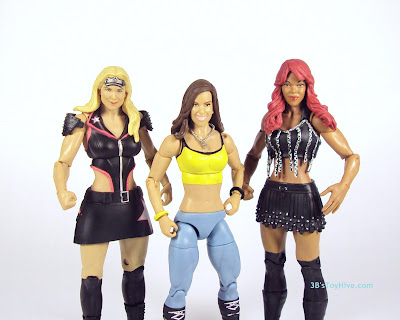 AJ Lee's debut figure turned out nice and has become very desirable mainly because Mattel produced an all-new female body for her. The attire isn't iconic, but is a good "throwback" version of AJ and I've paired her up with the Elite 19 Daniel Bryan figure. I'm definitely in for her upcoming Elite version, but I'm still waiting on "crazy chick" AJ with her ripped up t-shirt and jean shorts to go with Dolph Ziggler.
Posted by 3B at 10:24 AM