Well, here we are again. The third Summer in a row to feature a DC comics superhero movie. To be honest the last two films (2011's Green Lantern and last year's The Dark Knight Rises) were kinda lacking and did little to excite fans about the possibility of a Justice League film, but this year Superman is set to rise from the ashes in Man of Steel, directed by Zack Snyder and featuring a mega cast that includes: Kevin Costner, Diane Lane, Amy Adams, Laurence Fishburne and Russell Crowe.

That last name is the focus of today's review. In the film Crowe plays Superman's biological father, Jor-El, and incidentally his figure is the hardest to find in Mattel's accompanying Movie Masters line. Jor-El and Superman were my first two MoS purchases (a preview of next week's Honeypot!), but I thought it would be fun to review the elder El first. Take a look!


Just a quick weekend update for you, today I posted a new checklist guide for Mattel's WWE action figure title belts which you can view by clicking on the tab under the main banner or by simply clicking here. I've actually been working on this off and on since the beginning of the year, but after a few formatting changes and some updates I just finished inputting today, I'm unveiling it for the first time.

Also, I plan to link to reviews when available, but for now it's as ready as it's going to be.

Have a great Memorial Day weekend!

If I were going to mimic Poe Ghostal and come up with clever puns for each of these, I'd call this one "Miss(ed) Elizabeth." 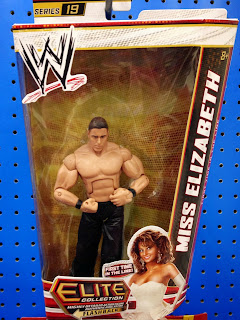 Well, it was only a matter of time... I've seen swaps done on Mattel WWE figures before, but this is the first one I come across since starting Collector Douchery a few months ago. On a quick grocery shopping trip to my local Target I found this little doozy, the sole "Elite" figure hanging on the pegs. I understand some employees may not be knowledgable about pro-wrestling, or toys, but whoever accepted this return is a f***ing idiot.
Posted by 3B at 6:30 AM

Last Thusday, WrestlingFigs.com revealed the first factory samples for WWE Elite series 22 courtesy of Mattel. I was excited to post my thoughts on the images, but wanted to wait a few days before I started writing. There are some interesting design choices in this line-up, a couple of crappy ones and something that ticked me off a bit.

The Honeypot: "Clothes make the man" & a Hardcore Legend!

Well, we're getting back into the swing of things: two reviews and an LoEB post last week and a brand-new installment of the Honeypot today! Only one new figure made it into the haul this week and you probably already know who it is since I reviewed him on Saturday. The rest of the 'pot is all accessory-related.

To close out the week, I'm accepting the assignment from the League of Extraordinary Bloggers to celebrate one of the longest running science fiction franchises ever: Star Trek!

A legend of hardcore wrestling arrives in the latest RSC exclusive from Mattel's WWE Elite series. Cactus Jack is arguably Mick Foley's most well-known persona, having wrestled in all the major promotions of his time: WWE, WCW and ECW, including traveling the world and becoming an international sensation in Japan.

I don't think anyone expected another one of the Faces of Foley to debut in the line so soon after series 17's Mankind, but I doubt anyone is complaining. I have fond memories of watching Mick Foley wrestle in the '90s and was excited to add him to my Mattel collection last year. Little did I know we'd have versions of two of his personas within a span of seven months from each other. Let's see how Cactus Jack turned out and whether or not we'll all want the third and final face of Foley. 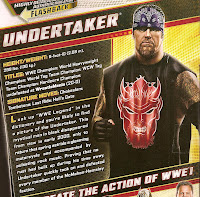 Okay, this week I'm planning to knock out two reviews, the first of which is the Undertaker in his "American Badass" persona and the other... well, you'll just have to wait and see!

But today the Deadman is the focus. His latest Elite figure is a flashback to the days when he emerged from a long hiatus as a custom chopper-ridin', sunglass-wearin', Limp Bizkit-Rollin', biker badass!

Some fans aren't too crazy about Taker's AB gimmick (including someone high up within WWE, apparently), but at the time it was a way to rejuvenate the character and give the "supernatural" aspect of the Underatker some much-needed breathing room. Let's see how Mattel faired in delivering this now-classic interpretation of Big Evil in action figure form!

I'm a bit backed up, the Hive was on a brief hiatus due to the passing of my grandfather at the end of April. He was very ill, but his condition deteriorated rapidly last month. Now he's resting eternally with his beloved wife of nearly six decades who passed on last year. I miss them both dearly, but know they're in a better place now. May they rest in peace.

Obviously, there wasn't much shopping going on at the beginning of the May, but today's Honeypot covers the last two weeks in April. Most of the items I picked up came via online orders, so it took a while to arrive and I decided to hold off on posting until everything was here. In fact only one of the figures covered was purchased in-store, the rest came from TRU.com, Amazon and the dreaded online auction house, evilBay!