To close out the week, I'm accepting the assignment from the League of Extraordinary Bloggers to celebrate one of the longest running science fiction franchises ever: Star Trek!


Nowadays my interests generally revolve around wrestling and superheroes, but in the early '90s I became infatuated with Star Trek. In fact, Play Mates' Star Trek: The Next Generation was the first toy line I can honestly say I "collected" and didn't just buy to play with. That doesn't mean I didn't, it just means I was interested in amassing a lot of the characters.

I remember watching reruns of the original series when I was very young, that included the cartoon, too, and my mom bought Star Trek IV: The Voyage Home for my brother and I on VHS (remember those?!), which I watched all the time. That led me to renting the other films whenever someone took me to the video store. But eventually Star Trek kind of fell off my radar and it wasn't until I discovered the toyline that I started watching TNG, and I absolutely LOVED it! 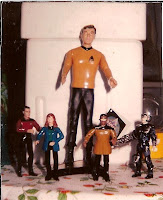 The first ST:TNG figure I had was Lt. Cmdr. Geordi LaForge (in dress uniform). My uncle Will bought for me as a present on my 11th (1993) birthday. He drove me to Toys R Us and let me pick out whichever toy I wanted. For whatever reason, I picked Geordi and I only wanted the one in the dress uniform. To this day, I don't know why I picked that version. I hadn't really seen the show at that point, much less seen him in that uniform.

That opened up the flood gates and among the usual pick-ups of Toy Biz X-Men and Kenner Batman toys, I started getting Trek figures. The picture above was taken way back in the day when my ST:TNG toy collection was light; along with Geordi I had the sinister "Q", Dr. Beverly Crusher and Captain Picard as Locutus. Around this time, my younger cousin (who's birthday is just a couple of days before mine) jumped on board the Trek wagon and together we started collecting (and playing with) Star Trek figures.

Of course, it didn't stop at Next Gen. Soon Play Mates was cranking out figures based on Deep Space Nine, which I also enjoyed. Then in 1994 came the Generations movie and a whole new slew of figures. Before the movie I didn't have an entire crew because my cousin and I didn't really want our collections to overlap, that way we could expand into the villains and other secondary characters that we may not have picked up on our own. 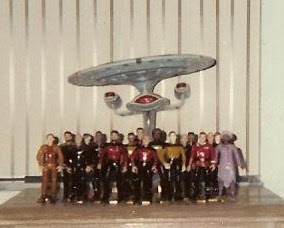 However, with the new movie came figures with new uniforms and although they weren't the uniforms seen in the film, I wanted to have the whole crew in matching attire. You'll have to excuse the pictures as I hadn't the faintest idea of how to properly photograph action figures at the time. I don't know how many Trek figure I eventually ended up with, but the above pic features most of my collection before I moved on to other things.

I didn't just have the action figures, though, I also had the "battle-damaged" version of the Enterprise D and even managed to pick-up the bridge playset, which I used for everything from reenacting episodes to hosting my own, non-Trek, team of space explorers! But man, was that thing massive. As much as I wanted to, it was too much of hassle to bring along whenever I visited my cousin. I think I only did it once or twice.

I also had the Type II phaser and tricorder role-playing toys. I used to love playing with those, they were really fun toys. I inevitably moved away from collecting Star Trek toys or any toys for that matter and unfortunately my collection moved on to some lucky little kid somewhere.

In recent years the discovery of cool sites like Dork Dimension and my own nostalgia for the line have tempted me into tracking down the old Play Mates toys, but except for figures of Capt. Picard and LaForge (still wearing that dress uniform...), I haven't picked up any.

I like to believe some day I'll move past modern toys, turn my attention towards old favorites and boldly go where I've gone before.

From around the League:
• Fortune and Glory (Days)
• AEIOU and Sometimes Why
• The 30ish Year Old Boy
• Infinite Hollywood
• Nerd Rage!! Against the Machine!
• Geek-Life Balance
• Dork Horde
• Whatever I Think Of!
• Doubleumbassonyou
• Diary of a Dorkette
• Vikkiverka
• Monster Cafe
• Team Hellions
• Goodwill Hunting 4 Geeks
• Cool and Collected