Well, here we are again. The third Summer in a row to feature a DC comics superhero movie. To be honest the last two films (2011's Green Lantern and last year's The Dark Knight Rises) were kinda lacking and did little to excite fans about the possibility of a Justice League film, but this year Superman is set to rise from the ashes in Man of Steel, directed by Zack Snyder and featuring a mega cast that includes: Kevin Costner, Diane Lane, Amy Adams, Laurence Fishburne and Russell Crowe.

That last name is the focus of today's review. In the film Crowe plays Superman's biological father, Jor-El, and incidentally his figure is the hardest to find in Mattel's accompanying Movie Masters line. Jor-El and Superman were my first two MoS purchases (a preview of next week's Honeypot!), but I thought it would be fun to review the elder El first. Take a look!

Obviously, I haven't seen the film, yet, so it's hard to say for certain who accurate the figure is to the source material, but I can say for sure that Jor-El is the most unique figure out of the first wave which includes Superman and General Zod. In true Movie Masters style the sculpt on Jor-El is soft and a bit cartoony, very similar to Mattel's Ghostbusters figures. These are mass retail figures and I'm not expecting Hot Toys-level likenesses, so I can't nitpick here too much, after all I'm a huge fan of Mattel's WWE toys and those are just as caricature-y. 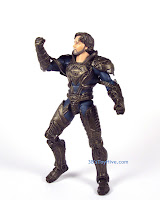 However, that doesn't stop Mattel from truly impressing with the detail sculpted in the Kryptonian armor the figure is wearing. The armor is composed of full-leg panels, forearm and shoulder pieces and upper and lower torso sections. Under the armor Jor-El's essentially wearing the same unitard Superman wears in the film. Again, haven't seen the film, but the few cutscenes where JE is shown in the armor it does appear he is wearing a cape also. That's not present on the figure. It may be that he also wears the armor sans cape in the movie, but we'll have to wait until June 14th to know for sure. One thing that is distracting on the figure is the size of his torso. It could be that the armor throws off his proportions a bit, but his upper body seems undersized.

The figure is primarily molded in brown plastic. Pale blue-grey paint is applied to the exposed areas of his undersuit. The armor features additional highlighting with bronze paint to give it a weathered finish. There are some small splotches of blue paint in a couple of places, but nothing too excessive. I'm glad about that, too, because this was the only Jor-El on the pegs that day. 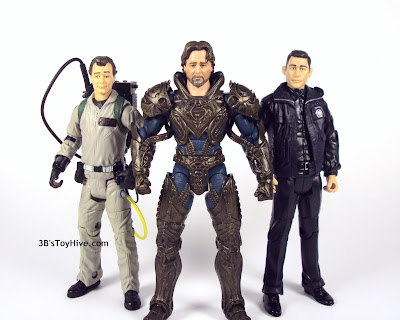 The articulation is more in-line with Mattel's GB and Green Lantern movie figures than The Dark Knight series. Jor-El would be tied with the Batman MM figures if he had an ab hinge. Unfortunately, it seems that was cut for budgetary reasons, although I can't complain too much thanks to the detailed sculpt.

He has a ball-jointed head (limited by his hair), swivel-hinge shoulders (limited by the armor and cables), swivels at the biceps, wrists, waist and thighs, hinged elbows, knees and ankles, and "Mattel hips". I can live with most of the articulation featured here, but the lack of ab and rocker ankles is detrimental to a figure like Superman which should ideally be able to achieve a flying pose. 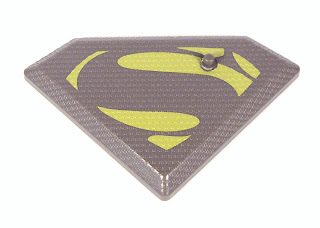 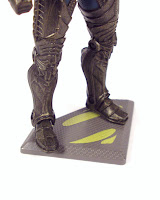 Collectors of Movie Masters retail figures should already be used to the lack of accessories with figures, Jor-El is no exception. Aside from the figure you get a stand that is borderline comically too small for the figure to actually fit on. It's the familiar diamond-shaped House of El crest (albeit, slightly redesigned for the new film) molded in grey plastic with yellow paint applied to the field behind the "S". I was surprised to find it had the same texture the base suit has, but it's just too small for the figure.

I don't know what the exact case packout is for this series, but the day I found them there were 4 Superman figures, 3 Zod and 1 Jor-El. Since then I've spotted MoSMM at another TRU, but there were only a couple of Zods left. So if that's any indicator, Jor-El is going to be really hard to find, follow by Superman (amazingly), but I think that's only because more fans (myself included) prefer the armored Zod.

You can expect to pay around $16 for these at Walmart (haven't seen the figures there, but the pegs were labeled) and $20+ at TRU. That's steep for Movie Masters which seemed to just skyrocket in price after the last wave of TDK. The crappy stand and lack of accessories doesn't help. 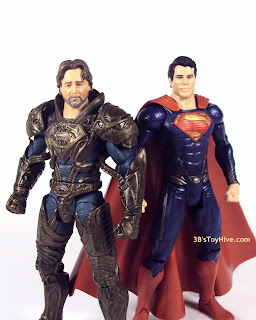 That said, I'm happy with the figure (and Supes, too!). The movie design has really grown on me, much more so than Superman's New 52 redesign. I think the film will be really awesome and I'm in this line for at least armored Zod, Faora and probably even the "shackled" Zod, too.
Posted by 3B at 9:47 PM