Last Thusday, WrestlingFigs.com revealed the first factory samples for WWE Elite series 22 courtesy of Mattel. I was excited to post my thoughts on the images, but wanted to wait a few days before I started writing. There are some interesting design choices in this line-up, a couple of crappy ones and something that ticked me off a bit.

Tensai
I'll start with my least favorite of the bunch. Not to say I think the figure looks bad, I just don't care for "Lord" Tensai. He's still Prince Albert to me and the whole Asian warlord gimmick never interested me. I'm more likely to buy a Sweet T figure. Seriously. However I can see myself picking this up if it's during some crazy BOGO sale where I can get him for $10. He'd definitely stand out on the shelf.

Moving on to a figure I'm VERY interested in picking up... 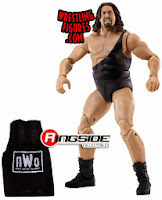 One Mr. Paul Randall Wight, Jr. in his pre-WWE persona as "the Giant", calling back to his WCW days and celebrating his time in the NWO.

This one's been in limbo for a couple of years now due to the demise of the Legends line, but it seemed like a no-brainer for Mattel to eventually release. I like the angry head sculpt, the hair looks great and I'm glad the tooled some new lower legs, but that painted singlet just doen't work for me. This may be one I'll have to track down a fabric accessory for. I would have preferred a sculpted singlet like they did with Jerry Lawler, but I guess it wasn't in the budget.

Big Show
Finally. FINALLY! Mattel gives us an angry current Big Show. Of course the rest of the figure looks damn near exactly as the Best of PPV version from last year and that includes the short boots with painted calves. I don't need the WHC belt and I can just buy the latest Basic version for the head, so this one's a pass for me.

This is probably the one I'm most excited for in the line-up. The intellectual savior of the masses finally makes his Elite debut and the figure looks nothing short of exquisite. I'm think everyone is pleased to see that Sandow will include a cloth robe. Unlike Tensai, a sculpted robe would have really hampered the display-ability of Damien Sandow on collector shelves.

Mattel Design Team also noted that they looked into giving him a unique hand sculpt to allow for his trademark wine glass grip on the microphone, but unfortunately the mic accessory proved too thick to make it happen. Kudos for them trying, though!

Kane
This is the one that pissed me off slightly. Why? Because not only is he coming with the same helmet accessory from the series 19 version, but this time Mattel's including his elbow pads which were left off the previous figure AND he carrying a Tag title belt. I can't help but feel short-changed by the E19 release. That doesn't mean I don't want this one, though. Ironically I plan to change the elbow pads for some smaller ones like Kane's currently using on TV.

They redid the torso without the piping, making this costume accurate to the second version that loses the multi-colored flames on the right leg and adds solid red flames on the left leg. He also features a new head scan. Sadly, it still looks like they're not giving him glossy boots.

And lastly we have an updated version of The Rock. He will be the first figure to include the recently redesigned WWE championship belt, but the design team also made some changes to his sculpt. He's getting a new head with a determined scowl. It looks decent, but this sample seems a bit cross-eyed. Hopefully it's just something on this specific figure.

The major change comes in the choice of the beefier torso. I can't be sure until I get in hand, but I'm mostly certain it's the same torso used on Triple H, Ultimate Warrior and pre-E17 John Cena. I think it works a lot better for modern-day Rock than his old torso does.

Considering Mattel turned to parts reuse to give him a new torso, I'm a bit disappointed that he only gets one accessory. But at least it's a brand-new accessory not released previously. I think the belt turned out well. The design's grown on me and I can't wait to have it on my shelf.

Now if I wanted to get a little nitpicky here, I'd add that his boots are still not tall enough. They should be coming right up to his knee pads. I would have mentioned this by now if I had written reviews of the E14 & E16 figures already. But I agree that these knee pads are more accurate to his latest appearance inspite of not being open on the back. A change I'll be making to this figure is using the slightly larger elbow pads which he also seemed to be wearing during his 2013 run. That's one change I made to the E16 figure.

Well, that's 3 out of 6 "sure-buys" for me, but overall this set looks really nice. They managed to keep the Rock and Kane interesting, give us a WCW legend and debut two new Superstars, while also providing an opportunity for new collectors to add the WHC to their collections.