The Honeypot: "Clothes make the man" & a Hardcore Legend!

Well, we're getting back into the swing of things: two reviews and an LoEB post last week and a brand-new installment of the Honeypot today! Only one new figure made it into the haul this week and you probably already know who it is since I reviewed him on Saturday. The rest of the 'pot is all accessory-related. 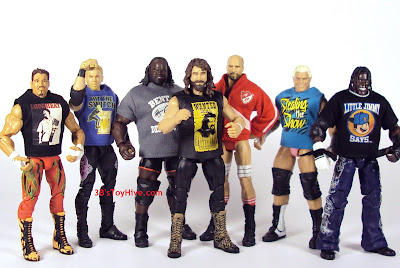 As you can see the bulk of this Honeypot came from Ralph's Figure Clothing where I picked up some much-needed accessories for Antonio Cesaro, Eddie Guerrero, Christian and Mark Henry along with a little icing for Dolph Ziggler and R-Truth.

The cream of the crop, though, is Cesaro's jacket (which he won't have with the upcoming Elite figure). It's high-quality and amazingly detailed. There's a velcro patch on the front to keep it closed and it manages to sit very well inspite of being pretty thick. You can even still fit the US title around his waist while the jacket is on. Nice!

Although E19 Dolph already has two wardrobe accessories, I really like his "Stealing the Show" look and since I'm planning to buy the next Basic series AJ (Ralph also has a STS t-shirt for her), now was a good time to grab this one for Ziggy. Same with R-Truth, after picking up an alternate head for him, I wanted to have something else to display him in and what's better than his zany "Lil' Jimmy" gimmick?

Eddie Guerrero, Christian (BoPPV) and Mark Henry are three Elite figures that all suffer from a lack of character-specific accessories due to their included title belts. Thankfully, Ralph's provides multiple options for each. I basically just picked my favorites out of what was available.

Also, when you order $50 worth of merchandise at Ralph's, they throw in a free figure shirt. I wasn't able to pick the freebie, but it just so happened to be one the Undertaker's "American Badass" tanks. Funny how that worked out and since I knew it was coming it motivated me to finally get AB Undertaker's figure review posted.

Along with Cactus Jack I ordered four sets of the deluxe display stands from Ringside Collectibles. Each set was on sale for $4.99, so I essentially picked up four sets for what 1 would have cost me had I ordered on Matty. The reason for picking these up is that they aren't as deep as the expandable spice racks I use in my bookcases and are able to fit on my computer desk's hutch. Last week I finally started moving some stuff out of the office future nursery and into the master bedroom starting with my computer desk. I wanted to be able to display a lot of wrestling figures on the hutch so I thought I'd give the stands a try.

I took some measurements and estimated how many stands I'd be able to fit on there and I was pretty much right-on the mark. The stands at each end are angled forward slightly, but otherwise fit perfectly end to end. The figures end up a little cramped, but the height of the stands and staggered configuration let you enjoy each figure for the most part.

So that's it for this edition of the Honeypot. Currently I'm searching stores in my area for WWE Elite 21, the third wave of Transformers: Generations voyagers and Man of Steel Movie Masters, none of which have shown up anywhere down here, yet.