I'm a bit backed up, the Hive was on a brief hiatus due to the passing of my grandfather at the end of April. He was very ill, but his condition deteriorated rapidly last month. Now he's resting eternally with his beloved wife of nearly six decades who passed on last year. I miss them both dearly, but know they're in a better place now. May they rest in peace.

Obviously, there wasn't much shopping going on at the beginning of the May, but today's Honeypot covers the last two weeks in April. Most of the items I picked up came via online orders, so it took a while to arrive and I decided to hold off on posting until everything was here. In fact only one of the figures covered was purchased in-store, the rest came from TRU.com, Amazon and the dreaded online auction house, evilBay! 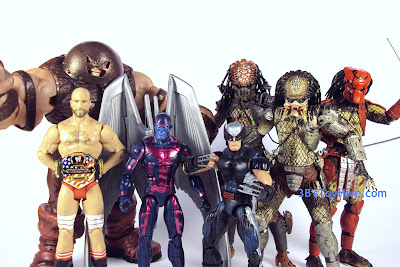 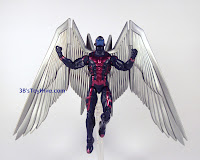 So kicking things off for this edition of the Honeypot is Archangel from the (Return of) Marvel Legends line and if you've followed along in previous posts, you know he's a figure I've been searching for EVERYWHERE, always arriving just a tad too late to find him. I finally gave up the hunt and turned to eBay where I found a brand-new, in-package, Archangel ready to ship for about $30. Not too bad considering Toys R Us now sells Marvel Legends for $19.99 and I always love having toys shipped to my home! I'm happy to report he's a marvelous figure, too!

My girlfriend's cousin was visiting from Tennessee during this period and he's a big WWE fan who is only recently getting into collecting figures. While he was here he asked if I could help him find an AJ figure and the recently released Attitude Era DVD because he couldn't find it anywhere. I turned to eBay for the AJ figure, but the DVD I ordered from Amazon. While on Amazon I picked up a couple of items for myself: ML Wolverine in his X-Force duds and the massive Select Juggernaut. The sculpt on Wolvie is easily the best that's ever been used for the character in all of the Legends series. I can't wait to have it in his modern yellow & blue uniform (coming in "The Wolverine" series)!

Juggernaut is nothing short of fantastic! This is the Juggernaut figure to own if you're a 6" collector. The sculpting and paint are phenomenal, but it's nothing compared to the weight of this figure. It is heavy! I'm hoping to have a few new  X-Men figures in the coming year, then I'll be able to put together a nice little display of them fighting Juggie.

The only figure I picked up at a store was Antonio Cesaro from series 27 of WWE Basics. Cesaro has quickly become my favorite Superstar on the active roster. Aside from the stupid yodeling gimmick they gave him this year, which thankfully has been abandoned, he's a great in-ring performer and I can see him moving into the Intercontinental title picture very soon, or who knows, maybe even a run at a World title. Anyway, I initially passed on the figure, preferring to hold out for an Elite version, but seeing as he hasn't worn his red attire in quite some time, I didn't want to risk ending up with ANOTHER black-trunked figure. So I scooped this one up at Target while they had Basics on sale for $8.99, which is two dollars cheaper than the usual price.

On a related note, Mattel Design Team confirmed on the WFigs forums that the upcoming Elite Cesaro (series 24) will only include the US title belt. The jacket didn't make it into the budget. Upon learning this I ordered Cesaro's jacket from Ralph's Figure Clothing (along with some other goodies) and will have a "complete" version of the uber-American on my shelf. 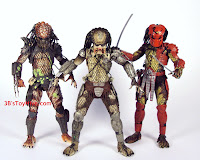 Lastly, I placed an order on TRU.com for some more Predator figures that I could no longer find in stores: the "battle-damaged" two-pack and "Big Red". The two-pack gives us an unmasked version of the Jungle Hunter Predator from the original film, along with a beat-to-shit City Hunter from the sequel. Unfortunately, I had some issues with this set. CH is missing his smart disc weapon, an apparently common problem with this set. My Jungle Pred. came with one of the gauntlet blades floating around inside the package. It didn't seem broken, but there's no way to put back in place with out opening the housing on the arm. Also, the other blade just slide back and forth freely with nothing to hold it in place in either position. I contemplated just returning the set to the store, but that may mean I won't be able to get a replacement. I haven't decided on what to do just yet...

The other Predator figure is Big Red and if you're not familiar with this character it means you've never watched the fan-flick, Batman: Dead End, created by Sandy Collora in 2003 as a demo reel. I remember getting a call from a friend telling me, "dude, you need to check this video out," looking it up on-line and promptly being blown away by the short. It's not the most amazing thing ever, but remember, this was before Nolan came in and revitalized the Batman movie franchise, so long-time Bat-fans were eager to see a new live-action version of the Dark Knight.

Anyway, if you haven't guessed by now, the film includes an appearance by Predators and Big Red is one of them, specifically designed by Collora for the short film. I thought it would be a cool addition to have for my burgeoning Predator collection. My only complaint with the figure is his height. He's kinda short and it seems to me he should be taller than the other Predators. I may be wrong though, it's been a while since I've watched Dead End.

That's it for this edition, on the next Honeypot things get HARDCORE!