A legend of hardcore wrestling arrives in the latest RSC exclusive from Mattel's WWE Elite series. Cactus Jack is arguably Mick Foley's most well-known persona, having wrestled in all the major promotions of his time: WWE, WCW and ECW, including traveling the world and becoming an international sensation in Japan.

I don't think anyone expected another one of the Faces of Foley to debut in the line so soon after series 17's Mankind, but I doubt anyone is complaining. I have fond memories of watching Mick Foley wrestle in the '90s and was excited to add him to my Mattel collection last year. Little did I know we'd have versions of two of his personas within a span of seven months from each other. Let's see how Cactus Jack turned out and whether or not we'll all want the third and final face of Foley. 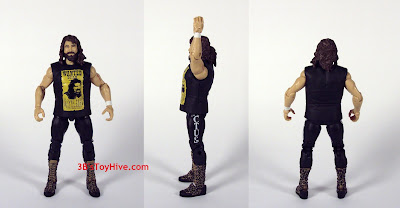 Usually Mattel will use a new head sculpt on a couple of figures before they tool a new one, but with Mick Foley this is the second head for as many figures and I'm happy about that.

I'm sure the removable mask feature of his Mankind figure played a small part, too, but Mattel created a new Cactus Jack-specific head for this iteration of Mick. Although not immediately obvious thanks to it's unruly nature, Jack's hair is partially tied back into a ponytail. It's sculpted with lots of detail, but without a wash of some kind it can be hard to make out where it is tied.

The expression on his face is a bit confusing. It doesn't look like he's having a good 'ol time like his box art would suggest, but he's not mad, either. It's more of an unimpressed look. Sure, it looks like Foley, but it doesn't quite give me the Cactus Jack, "extreme" vibe.

The rest of Cactus Jack is mostly parts reuse, except for his t-shirt. It's a new molded shirt that unlike other plastic shirts in the line doesn't have pegs to hold it in place. Instead there's just a flap where the front and back halves meet on the left side of the figure. However, the flaps have been glued shut, so the t-shirt is non-removable. At least, not easily anyway. I mention it because it makes it hard to determine exactly which torso is under there. What I can tell you for certain is that the torso was molded in black plastic and only features some paint on the neck. The t-shirt itself has one of the largest single tampos we've seen on any figure. Cactus Jack's wanted poster is printed with yellow paint and is well-applied and detailed. That's more impressive when you consider it's printed on a black surface. 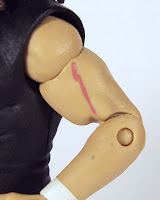 The only other paint apps on the upper body both appear on Cactus' left arm. There's his pinkish-red scar on the outer bicep almost resembling a lighting strike. The scar jumps out at you a bit more than I think it should, but I'm glad Mattel didn't leave it out.

The other paint app is the white tape applied to his wrist. I'm accustomed to seeing Cactus with both wrists and his hands wrapped in white tape, or no wrap on the left hand, so I'm not sure what the design team was going for here. The bio on the package would lead you to believe this figure is based on Cactus Jack's appearance during his "Hell in a Cell" match against Triple H from No Way Out (2000), but he had both his wrists and hands wrapped at that event. So what exactly are they going for here? Could they not fit the additional paint apps into the budget for the figure? If anyone knows, please tell us!

Below the waistline, CJ reuses the stoutlier lower torso along with "tights" leg pieces. The design team has stated that their line features "idealized" versions of Superstars and I think they were quite generous when picking the thighs for Cactus here. The real Foley is especially heavy on the lower half and suffers from "rubbing thighs", so this figure is a much more beefed-up version of the wrestling icon.

The figure has "CACTUS" printed down the side of each leg, but due to the stiff t-shirt it's difficult to see the "CA" that start at his hips, so I can't say how good the apps are up there. The rest of the word is neatly applied, however I have some issues with the "S" on both legs. 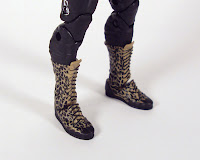 On the right leg, there is a portion of the letter that is printed on the peg that connects the thigh to the knee. Unfortunately, the peg rotated and that part is misaligned now. I haven't figured out a way of moving it without scratching the paint off and wrenching the knee back and forth doesn't help. The other leg's issue is that the paint is almost completely rubbed off on the peg. I'm not sure which is worse. I can't say it's horrible, it's a minor nitpick in all honesty compared to paint rub on a larger area.

The last major paint application appears on Cactus Jack's boots. They were molded in light brown plastic and black paint was used for the laces, soles, heels and toes and to create the leopard print patterns. The application is well-done and both boots look great. 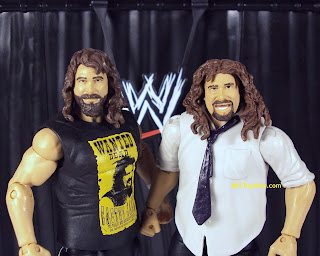 Inspite of using the same torso (I think), Cactus Jack is slightly taller than E17 Mankind. Some always considered Mankind to be too short, but I'm going to chalk it up to Cactus wearing boots and Mankind wearing sneakers. Makes sense to me!
Want to get extreme?! Cactus Jack is ready to get extreme!

He comes with three accessories: a stop sign, handcuffs and the upper half of ring steps. All these weapons have been released by Mattel before in various playsets and figure packs. I already had the handcuffs thanks to another Flashback figure, Big Boss Man, but I ended up with a second pair PLUS a stop sign when I picked up the Walmart-exclusive, Ringside Battle playset back in January. Needless to say, those two accessories weren't selling this figure to me.

The third accessory is a bit more interesting. I don't have any ring steps so it's cool to finally have some available for the display or future photos. Sadly, they're only the top portion of the steps. I have no idea of Mattel plans to eventually include the lower half with another figure, but I can tell you that these are pretty massive, so I'm curious to see how Mattel would fit them into an Elite package. 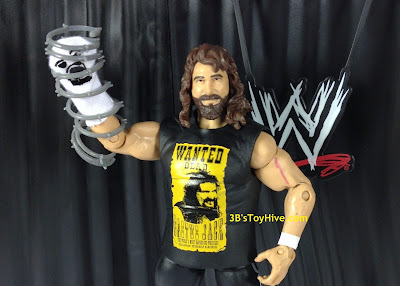 Being that WWE programming is "PG" nowadays AND Mattel is a family-friendly toy company, there was no chance of us getting any barb-wired weaponry with Cactus Jack, a staple of the hardcore legend. I borrowed some barb-wire from one of the 30th Anniversary G.I. Joe figures and decided to take Mr. Socko up a notch. But I feel the most obvious accessory omitted in this release is Cactus' plaid shirt, another piece of his No Way Out attire that's missing on the figure. Of course, there's an easy way to correct that thanks to previous Jakks Pacific versions of the character and an online figure clothing source.

Oh, yeah, one more thing that would put this figure over the top: 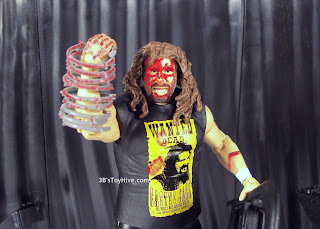 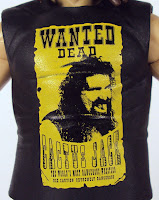