Over at BattleGrip this week Phil Reed is celebrating Batman with multiple daily posts ranging from toy reviews to vintage commercials all of which are focused on the caped crusader. I contacted Phil about joining in on the fun after watching a commercial for the old Legends of Batman toyline by Kenner.

Battlegrip and a few other websites have a good handle on several modern Batman toys, so I thought it would be cool to review an vintage Bat-toy. With that said here's a look at the Batmobile from the LoB series. 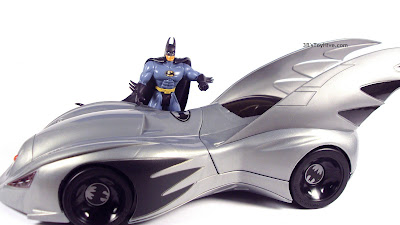 Kenner released their comic-inspired Legends of Batman line in 1994 (I think...) and featured mainly "Else Worlds" versions of the Dark Knight and his friends and foes. As a kid I only ever owned one figure from that line, "Knightsend" Batman. I wasn't a fan of the extreme poses the figures were sculpted in. However, in 2008 I started collecting Batmobiles from the various Kenner toylines of the 1990s and thus ended up with this vehicle and "Crusader" Batman (pictured above).

I don't know what EW story this Batmobile is from, but it's easily one of the most extreme Batmobiles ever created in toy form. The Legends Batmobile is interestingly molded in grey plastic with only a few black details adorning it. A drastic change from the usually black or blue Batmobiles in the comics and other media. 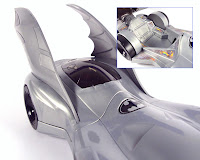 Even crazier is the position of the cockpit. It barely peeks over the elongated hood from it's spot between the giant wings at the rear of the car, making it damn near impossible to pilot if it were a real vehicle.

There's only room for one action figure, so Batman rides this badboy solo. Inside the cockpit there are a few details sculpted into it, like the seat and some of the controls on the dashboard and armrests. However, most of the details are achieved with the use of multiple decals you have to apply yourself. Decals are also used on the exterior of the Batmobile.

The Batmobile's familiar jet exhaust is sculpted on the rear, but a multi-colored decal recreates the flames. Decals also create the brake lamps and parking lights.

The black sections on the wings are also decals which are usually peeling up along the edges whenever I pull the toy out of it's box. 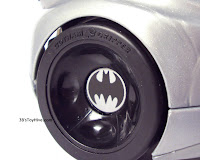 More decals are used for the headlights and Bat emblems on the hood and in each wheel. One detail that surprises me is the sculpted brand name of the "tires" used on the vehicle.

"GOTHAM GRIPPER" appears on each of the four wheels making me wonder if it's a nod to the comic the toy is based on, if there is one. Why else would they bother with such a trivial detail?

The LoB Batmobile doesn't feature much in the way of action features. There's the swing open canopy, which comically raises the entire top rear of the vehicle just the get the figure in or out, and one firing turbine missile. That's acutally a common trait of Kenner's Batmobiles. They usually feature a firing missile at the front. This was true of the Dark Knight Collection Batmobile, too.

The missile is activated by pressing a small red button on the right fender. 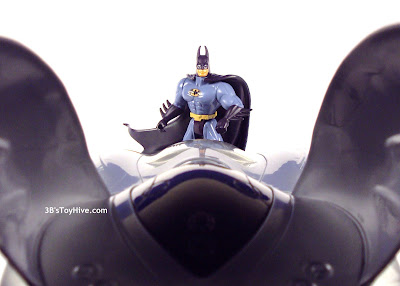 This is definitely one version of the Batmobile that stands out against the rest. It's color alone is enough to make you wonder why Batman, stealth freak that he is, would ever choose to drive it. The LoB Batmobile isn't my favorite by a long shot, but it's interesting enough to keep in the collection and not as gaudy as the live-action "Forever" or "B&R" Batmobiles. 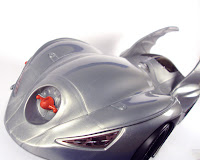 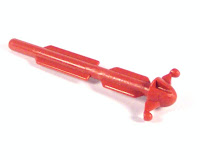 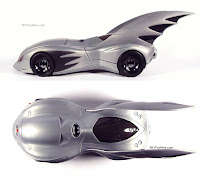 Remember to sign up for the Hive's newsletter, it's free and you'll receive new posts directly to your inbox! Just submit your e-mail address in the 3BTH Newsletter field near the top right side of the page and be among the first to read new content on 3B's Toy Hive!
Posted by 3B at 3:00 AM