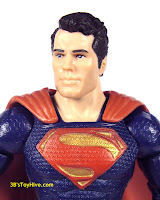 The prodigal son returns!... Again. Last week I kicked off my reviews of the Man of Steel Movie Masters line with Jor-El, this week we're taking a look at the titular hero, Superman!

MoS takes a pretty drastic turn in the design department from previous live-action incarnations of Superman, very similar to, but decidedly better than the current comic design of Kal-El. We're only a little over a week away from Man of Steel being released in theaters and I have to admit that in the last couple of months I've become very excited to see what Zack Snyder does with the franshise.

After the success of Batman Begins in 2005 hopes were high for Bryan Singer's 2006 film, Superman Returns, only to be squashed by a rather mundane outing for the last son of Krypton. Hence the reason I tried not to get too excited about MoS this year. However, I have to admit it seems like it will be the Superman film modern audiences have been yearning for.

For now, let our hunger be satiated with the first Superman figure released in conjunction with the new movie.

I think for most people the redesign of the suit is a "love it or hate it" kind of thing. Personally, I feel costume design is secondary to the story. If the story is good, it basically doesn't matter what details were changed on the costume. That said I love the new movie costume!

It doesn't bother me that they got rid of the red under(over?)wear or the "S" on the cape. And I like the silver belt, although, gold would still work for me, too. I wish the new52 Supes looked more like this. I hate the black logo on the cape and the red belt  looks odd. But that's another review for another time.

For MoS Superman, Mattel recreated the textured finish of his attire in plastic form. It covers the entirety of his suit except for the silver piping overlaid throughout and the bracers on his forearms. The piping is pretty intricate, especially on the back, but I figure since this is also the basis for General Zod's costume, Mattel went for the most detail possible.

The cape is a separate piece glued down on either side of the collar and pegged into the center of the figure's back. It's thick and heavy, possibly even heavier than the figure, and is pretty much stuck in the pose it was molded in. I would have opted for a fabric cape in this case to resolve some of the balance issues with the figure. 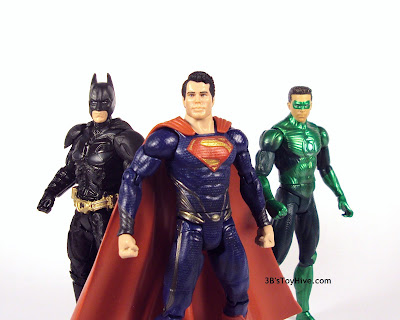 The likeness to actor Henry Cavill isn't perfect, but from certain angles you can see him. I think they made the head too wide, but otherwise passable for a Movie Masters figure.

Superman body was molded primarily in blue plastic with his neck and hands painted to match the skin tone plastic used for the head. The piped design was painted grey with a hint of silver and the "belt" has some bronze paint to differentiate it from the rest of the piping. Red paint was used for Superman's chest emblem and boots. Gold paint fills-in the field behind the iconic "S" shield. Something to keep an eye on, though, is the dark airbrushing used on the shield. I found some figures that had dark spots on the "S". The figure I purchased was the cleanest one out of the group. 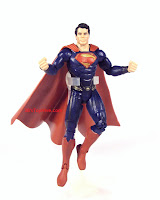 Articulation isn't horrible, but it's not quite what it needs to be for a character primarily known for flying. His head is on a ball-joint, but the width of his neck impedes a lot of the movement so he can't really look up. No issues with the arms which feature: swivel-hinge shoulders, biceps swivels, hinged elbows and swivels at the wrists.

The torso is the next major articulation problem. There's no movement in the chest, so the entire upper torso is static. There's a waist swivel, though it doesn't do much to help with flying poses. The legs start with Mattel's familiar (for non-WWE figures)  swivel & hinge design at the hips. Lower thigh swivels and single-hinged knees and ankles finish out the articulation.

Like Jor-El, Superman does not have any "rocker" ankles. That side-to-side movement goes a long way to creating stable power poses. Really wish they could have added them on these figures.

Superman comes with one accessory and it's hard to classify it as such: a display stand. Just like his father's figure this one is molded in the familiar diamond shape, albeit in red plastic this time. It's the exact same accessory, so it's just as small and purposeless. Even the peg on it is ineffective.

I know Superman isn't known for gadgets and it's seemingly difficult to come up with an appropriate accessory for him, but come on... There's another version of this figure that will include a "Kryptonian command key" accessory. If that's the case, what is the point of this release? Is it a "mint-on-card" collector thing? 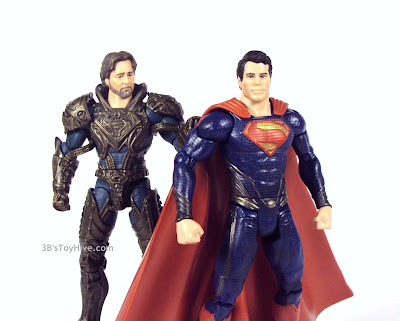 Without a doubt the best part of this figure, like Jor-El, is the sculpting. It's amazingly detailed, even if the likeness is soft, and seems to be great representation of the on-screen character. It's hurt by the few missing articulation points, which bothers me more than the lack of accessories, and would make him a really great figure. 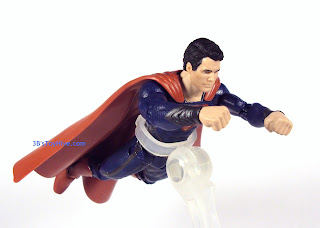 Using one of Mattel's flying stands I can get him into a half-decent horizontal pose, but he's still looking down. I don't know what changes Matty made to the flying stands 2.0, but I doubt it will be enough to help this figure achieve flight. Hopefully, he won't have any issues soaring in theaters next week. 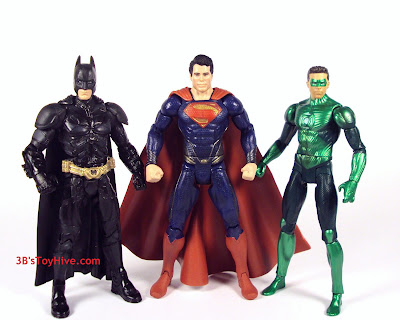 Remember to sign up for the Hive's newsletter, it's free and you'll receive new posts directly to your inbox! Just submit your e-mail address in the 3BTH Newsletter field near the top right side of the page and be among the first to read new content on 3B's Toy Hive!