Happy Saturday everybody! I've decided to change up the schedule [what schedule? - Ed.] a bit and start posting The Honeypot on Saturdays, allowing it to appear at the top of the post list through weekend and probably Monday, too. Because of a recent change in my schedule at work I usually end up photographing my hauls on Thursday nights now, so it makes sense to get the 'pot posted on the weekends. Moving on...

This time around we find DC-related toys making a comeback at the Hive after a significant hiatus. Check it out! 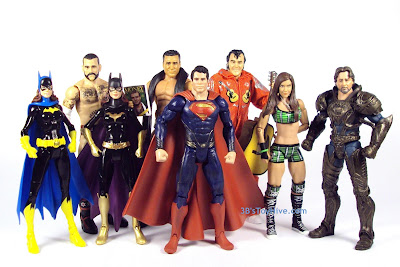 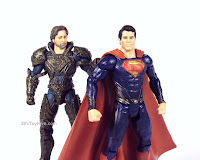 Kicking things off for this edition of the Honeypot are my first two purchases from the Man of Steel Movie Masters line: Superman and Jor-El, the latter of which I reviewed this past week. Are they the best action figures on the market? Hell no. There not even close to my favorite Mattel line, the WWE Elite Collection, but the sculpts are nice and they display well, so I'm in for a few more figures.

These were found at the "uptown" Toys R Us store and after a price match to the website, a coupon for $10 off AND a gift card a friend gave me for my birthday, I picked up these two along with "The Bat" for about $25. This is the third "Bat" I purchase, but this one comes in 1:50 scale, larger than the standard HW and Matchbox releases, plus it comes with a stand! 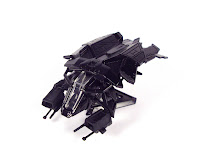 If you're not familiar with HW's Batman 1:50 series, they (re)debuted last Summer around the time The Dark Knight Rises was released and feature everything from the 60s to modern versions of Batman's various vehicles. I have several of the Batmobiles already, but still on the lookout for the black Tumbler and '89 Batmobile.

Week two started out with a package from Amazon. After putting up a Batman display last month I noticed there was a very central figure missing: Batgirl. I pretty much skipped her at retail, but a quick search on Amazon snagged me both her Silver Age and New 52 versions for about $16 apiece. 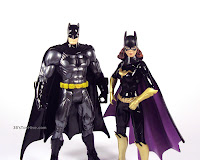 I'm not a fan of DC's New 52 reboot; the stories have taken a decidedly darker turn and seem to be excessively violent and grotesque just for shock value. Not to mention Jim Lee has hideously redesigned nearly every character into low-budget live-action TV movie versions of their iconic looks. The one saving grace in both story and design is the Bat-family of characters. The excessive detail and armor plating look make sense for these heroes and I actually want them on my shelf! Batgirl is only the second Bat-character to be released in their new 52 look, but I'm looking forward to Robin, Nightwing and Tim Drake's Red Robin. Who knows, maybe they'll release Batwoman, too!

And capping off this installment of the Honeypot is the long-awaited arrival of WWE Elite 21! I found a whole case (assortment "A") of the series at my local Target on Thursday and boy, was the timing just right! There were 2 Rybacks, 2 Mysterios and one each of Orton, AJ, ADR and Honky Tonk Man. 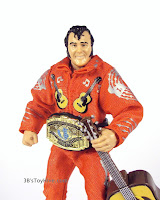 I was most looking forward to the sole "flashback" figure in the wave, HTM, but also picked up ADR and AJ which do not disappoint. Reviews to come soon! Also, I made a stop at my local Walmart where the pegs were jam-packed with the new "World Champions" wave of WWE Basic. I was tempted by the Hasbro-inspired Ultimate Warrior, but ultimately decided on just CM Punk. I did a head swap with the Elite 20 Punk and now have a late 2012/2013 heel Punk for future display. I wanted the new Big Show head, too, but it feels like I've purchased way too many Shows recently, so I left him behind.

Well, that's a wrap on another edition of the Honeypot. Until next time, happy hunting!


Remember to sign up for the Hive's newsletter, it's free and you'll receive new posts directly to your inbox! Just submit your e-mail address in the 3BTH Newsletter field near the top right side of the page and be among the first to read new content on 3B's Toy Hive!
Posted by 3B at 10:44 AM