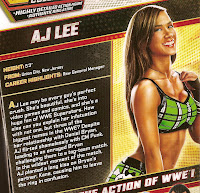 Originally I planned to review my three Elite 21 figures in the same week, but that fell apart for reasons discussed in yesterday's LoEB post along with a couple of other reviews that popped up on the fly.
That's okay, though, because good things come to those who wait and today's review is the 200th featured on Hive! What better figure to review than one from my favoriate action figure line, Mattel's WWE Elite Collection?

Today I'm looking at everyone's favorite fiesty little nerd-goddess, AJ Lee, finally arriving in her ring gear. Sure, it's not her current ring gear, but it's a cool look, nonetheless. Let's jump into it!

If you were expecting a lot of new pieces on AJ's first Elite outing, then I'm sorry to break it to you, but she's nearly 100% identical to her debut figure from the Basic line right down to the bracelets and lightning bolt necklace. That's good and bad. It's good because I feel the sculpt on that figure really captures AJ's proportions well and the boots are very nicely detailed. It's bad because it mean that she still has single-hinge knees. This is the Elite series, dammit! 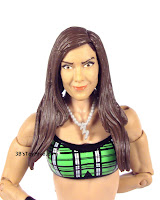 The one major differnce sculpt-wise is the head. MDT designated this the "crazy chick" head sculpt. And by crazy they mean the hopelessly/psychotically-devoted-to-you look she's so well-known for.

I think this expression fits in great if you pose here next to Daniel Bryan or Kane... or CM Punk... or John Cena. But not so much for Dolph Ziggler. With Ziggler her admiration seems to be not as blind as it was for the other Superstars. I see her as more of Dolph's equal than a fangirl who gets to hangout with her crush.

The only other difference is the addition of knee pads, which if I'm not mistaken, are completely new. I can tell you for sure they are significantly smaller than the smallest knee pads any male Superstar uses and the only knee pads I've encountered on Divas figures are much bigger than these.

So what makes this figure worthy of a slot in the Elite Collection?

It's the deco. Now, it's not the most amazing thing ever, but it is out of the Basic series' budget and releasing her as an Elite was the only way we were going to get it. The application of the green plaid is nearly flawless on my figure, but with the amount of apps necessary to accomplish the deco, there's a lot of room for error. I've seen a few sloppy figures in-stores.

The plaid deco is featured on her top, shorts and knee pads with Lee's skull & bones logo on each hip and pad. The figure itself is mostly cast in AJ's skintone thanks to her exposed legs. Black paint was applied to here hands and forearms to recreate her wraps and each bracelet has been painted in their respective colors. Unlike the Basic release, the necklace was not painted silver, instead simply left in it's molded grey plastic finish. The only other paint apps appear on her over-the-calf, sneaker boots, which are the same as her debut figure's. 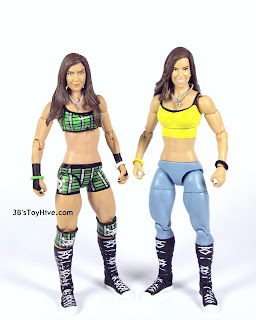 In all, I think this turned out to be a nice release and a great AJ figure. While I understand the budget constraints caused by the paint heavy deco, I still feel like she should have included an accessory although I'm not sure what that could have been. That shouldn't deter from the figure. She has a new head, new knee pads and a slick deco. I've inadvertantly become an AJ Lee collector because I'm in for at least her newest Basic figure (featuring black top and blue jean shorts) and still see a place for each of the other versions within my collection. No new Elite Divas are scheduled until series 24 when Trish Stratus will make her long-awaited debut in Mattel's WWE line. I'm sure she'll surpass AJ in the accessories department, but it may be difficult to best her when it comes to deco. Here's hoping it'll be a tight race!

Remember to sign up for the Hive's newsletter, it's free and you'll receive new posts directly to your inbox! Just submit your e-mail address in the 3BTH Newsletter field near the top right side of the page and be among the first to read new content on 3B's Toy Hive!
Posted by 3B at 3:00 AM