The Honeypot: Blitz in the Bank!

This is the longest span of time between posts since the Honeypot reemerged as a weekly/bi-weekly feature last Fall. One month since the last Hp and I was surprised to see how little was featured in today's post. I kept going over my purchases throughout the month of June and couldn't help but feel like I was forgetting stuff.

Then it dawned on me... Pre-orders! I actually placed a few preorders that haven't come in, yet. One of them (DC Signature, Wally West Flash) has been sitting in my "Pile of Loot" at Big Bad Toy Store since late May, waiting for me to add a few more items before I hit that SHIP button. The other items, ordered on Mattel Shop, should be shipping in the next couple of weeks.

So while June may seem like slim pickings on the surface, the seeds are planted for future Honeypots. For now here's a look at what I picked up since my last post. 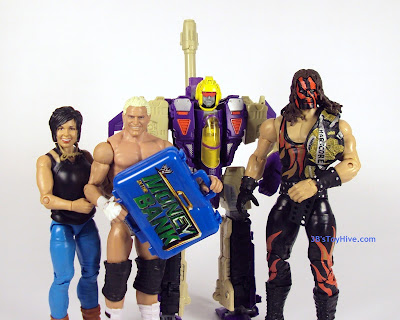 My first purchases didn't come until we were almost halfway through June. I found the third wave of Transformers: Generations voyagers at my local Target. Blitzwing was the one I wanted the most, but I also picked up Springer. He's not on the list or in the picture because I ended up returning him. He's a great figure and I like the IDW asthetic, but at $24 pre-tax, these aren't cheap and even though FansProject's unlicensed Warbot Defender has some serious flaws, I'm okay with that version as my classics Springer. Perhaps if he pops up on sale somewhere I'll pick him up.

Blitzwing isn't without his own problems, but I really like his robot mode and the other modes look pretty good, too. For those unfamiliar with Blitzwing, he was one of the first "triple changers", meaning he has three transformation modes: robot, tank and jetplane. The main issue with Blitzwing are his shoulders. They don't lock correctly when in robot mode. This seems to vary greatly from figure to figure based on several reviews I've read/seen.

I attempted a fix that was posted on YouTube, which improved the shoulders a bit, but they're still far from perfect.

My next purchase was the Vickie/Dolph two-pack. I'll admit the main motivator in grabbing this set was the Money in the Bank briefcase, which is the first I own. Now, I contemplated this purchase a lot, actually skipping the set (packed at a one-per-case ratio) on three separate occasions! I had no need for the Dolph, but the new Vickie eventually forced my hand, so the fourth time I saw them, I caved and picked them up.

The new Vickie is a perfect alternate version to have in my collection and the MitB briefcase has become as relevant to today's WWE as a championship belt, so it's nice to have one for display. The blue briefcase was previously released with Elite series 10 Kane, however this new version is dented. It may just be the MitB pay-per-view coming up this month, but I'm seriously thinking about the E20 Cena so I can add the red briefcase, too...

Or maybe I'll just wait for the next figure to include it. 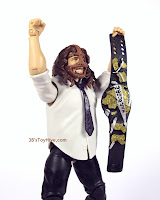 And finally we have Ringside Collectibles latest WWE Elite exclusive, "Hardcore" Kane. The attire on this figure is one of my favorite Kane attires, but like the DZ/VG Battle Pack, the accessory is what really sold the figure. HC Kane includes Mattel's first Hardcore Championship belt and I'm actually really impressed how well it turned out. Unlike their other belts the HC title is one molded piece of rubber, no plate inserts whatsoever. That's why the medallions aren't vac-metal.

I feel it works for the HC belt because it should look dulled and worn from relentless abuse. In all fairness to Kane, the belt isn't really the only thing selling the figure, but the design team took some shortcuts I'm not particularly happy about. My concerns about the figure with after seeing RSC's promo pics was justified once I had the finger in-hand. He's just not as well-done as the last RSC-exclusive Kane and that's a bit of a shame.

If you're a Kane fan, he's still worth getting and isn't generally a bad figure, just missing a few details to make him a great Kane figure. Full review soon, I promise.