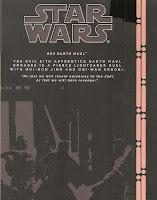 I'll comment on the package later. First up, Maul is packaged in his long robes in the box. Hasbro could have gone the Mattel route and have this be a variant of Maul, just giving us the figure in his fighting attire, then eventually double-dip with the cloaked version. Thankfully, they did not and instead gave us multiple display options.

The robes are attached to the head at the hood. The image in the center shows how the robes look when this head isn't attached to the body. The transformation to combat mode occurs when you pop the head off and work the arms out of the openings on the side of the robes. The robes are very soft plastic, more rubber than plastic, actually, but still limit some of the articulation, mainly the head which is pretty much immobilized due to the hood. 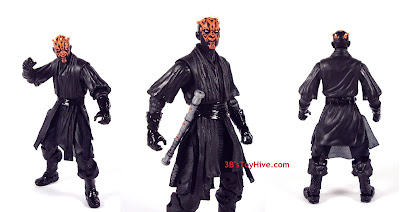 Beneath the robes you have Maul in his fighting duds. It's a cool mix of hard & soft plastics and cloth. The cloth portion lies under the soft portions of his coat. The cloth isn't aligned perfectly (it has slits over each leg), but I'm not sure if it moves out of place due to the articulation or if it was just attached incorrectly. It seems to be fitted between the waist swivel. 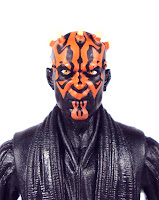 The alternate, non-hooded head is really well done. The entire sculpt is really well done, in fact. One nit-pick I have with the head is the execution of the spikes. There rounded and don't capture the jagged look of Maul's spikes in the film. Their softness may have been a result of the paint, but that's a pretty insignificant qualm.

One issue that is much more significant is the sculpt of his feet. I'm not sure if the issue lies in the design of his costume or perhaps there was a problem when molding the figure, but the soles of his boots are not flat.

The ball of his feet curve upwards towards the toes and his heels are similarly rounded at the back. This creats some balance issues when posing the figure and more often than not he tips over. I'll have to make sure to dig around the display stand bin for one that will keep him upright on the shelf. 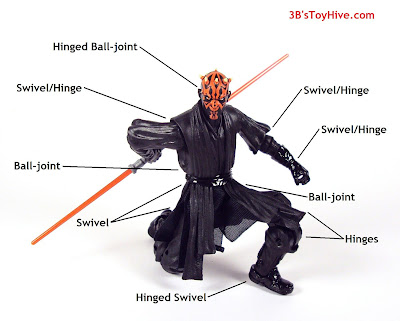 The articulation on these (well, at least Maul) is really good. The diagram breaks down each point one-by-one, but I'd like to add that the range on the chest is outstanding. He has good front and back motion with plenty of side to side. This is something really important for a character like Maul who is an expert martial artist and moves with the grace of a gymnast.

In terms of articulation, Hasbro has taken everything they've done right with their Marvel Universe/Legends lines lately and applied it to Star Wars. Maul uses the new ankle system seen on recent MU/ML figures giving him great range there. I also see a lot of similarities between Maul and Mattel's WWE Elite articulation model, especially in the legs. Darth Maul uses the same kind of ball pin hip joint with swivels at the top of the thighs and double-hinged knees. Coupled with his upper body movement, Maul's capable of a lot of poses.

The only issue, again, are the rounded feet. A stand should take care of that problem, though. 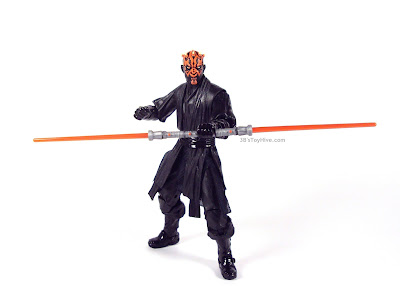 Let's talk accessories. Along with his alternate head/robes combo, Darth Maul also includes space binoculars and his trademark double-edged lightsaber. You may have  surmised from the pictures above that the "blade" portions of the saber are removable, something unnoted in his package.

In fact, I was unaware of the fact until I read Dark Lord Dungeon's review of the figure. This of course opens him up to even more display options. The handle is sculpted with all the details of the on-screen prop: rings, grooves and red buttons.

There's a long peg sticking out of one end that plugs into a small hole on Maul's belt (seen above). The peg is very thin so handle it with care to avoid snapping it off. The entire hand is made of soft plastic which can make it frustrating to pose in both his hands, but can appear straight with some work.

The blades plug into each end of the handle and stay in place thanks to a ring molded into them. The blades are molded in transparent plastic. 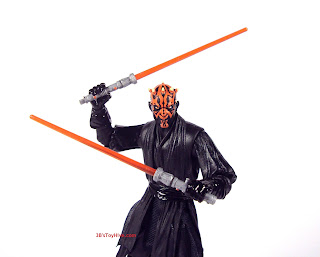 The other cool feature of Maul's weapon is it's ability to split in two at the center. One side of the handle has a U-shaped peg that fits into the U-shaped hole on the other handle. This insures all four buttons are facing the same way when the handle is intact. Again, more display options. You can have Maul dual-wield or recreate the final moments of his fatal battle with Padawan Obi-Wan Kenobi.

Maul has one more accessory which I apparently forgot to photograph. It's the monocular (seen in the stock image to the left) he uses when hunting down Princess Amidala on Tatooine. It's very detailed, but I would have been fine without it.

It's impossible to get him to hold while his robes are on, like in the film, and not much better once the robes are off. Plus, I rather have him posed holding his lightsaber.

However, Hasbro is obviously trying to give is our money's worth with this line and I'm glad they included as much as possible.

What else can I say about this guy? He really turned out great (except for the issue with the feet) and if you've skipped SW figures because of their small size, this is certainly the time to hop on board.

A few notes on the line overall:

These are 6" scale figures, but less Marvel Legends/DCUC and more Movie Masters overall. So I guess it's a truer six inch scale than traditional superhero-type collector figures. That's cool, though, because eventually I can have Darth Vader team-up with General Zod... or have them fight each other. Coolness!

The package is standard across all figures. It's a smokey black window box allowing you to see the entire figure and it's accessories from the front and right side. It's very collector-friendly, so you can remove the figure, display it and then return it to it's box. Also, it's a very slim profile and rectangular, saving you MOC collectors lots of space!

Overall I'm very excited about the future of this line. R2-D2 is the only other figure I have so far (I skipped X-wing Pilot Luke and the Sandtrooper), but I preordered the entire second wave to make sure I get Boba Fett after his single preorder sold out on BBTS. The second wave also includes Han Solo (my favorite SW character), Princess Leia in her slave outfit and Greedo.

The third wave will include Bespin Luke and a regular Stormtrooper, leaving us to wonder when we'll see Chewbacca, old Obi-Wan, Vader and C-3PO.
Posted by 3B at 11:47 AM