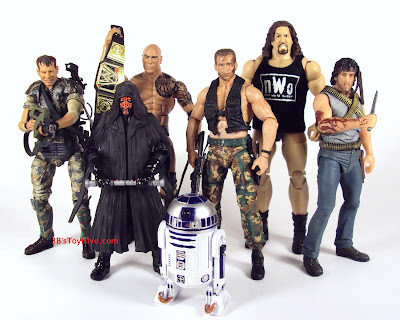 We'll get to Star Wars in a minute. For now the other main focus is NECA and the exceptional work they are doing with some beloved film franchises of the 1980s. Dutch and Hudson are part of the latest wave of the respective series and were the first two purchases I made during this period. However, I ordered them from Toys R Us' website, so the first figure I actually had in hand was Rambo from 1982's First Blood. 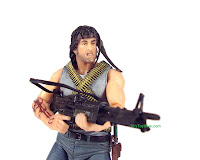 I've always been a casual Rambo fan, a stark contrast to my younger brother who grew up idolizing Rambo, Rocky and pretty much everything Sylvester Stallone did, but with a mini-Arnold Schwarzenegger on my shelf, I felt I needed Sly and why not from one of his best flicks?

Having compatible action figures of Stallone & Schwarzenegger is something I've always wanted since the days of Contra on the old NES. Sure, they've been done before, in fact my brother and I had these over-sized, rotocast of the pair (I had Arnold based on his appearance in Commando, he had an Over the Top Sly), but those weren't in-scale to anything else we owned. And now thanks to NECA, they stand among the Predator, Xenomorphs and RoboCop!

This new version of Dutch appears in his "Jungle Encounter" look, specifically the scene in the film were he first encounters the Predator. To me it's more iconic than the "Jungle Patrol" figure. Encounter Dutch is a pretty good stand-in for a "Commando" Schwarzenegger. It's also the basis for the upcoming "Thermal Vision" Dutch from the eleventh series of Predator figures.

The last NECA figure I picked up this month is Private William Hudson from James Cameron's Aliens. So far I only own one figure from this new series, the Xenomorph Warrior, but I'm really digging these and have preordered the next wave and the two-pack featuring Hicks versus a shotgun-blast-to-the-head alien. Hudson will reappear in other two-pack later this year with another battle-damaged creature, although his will have machinegun spray across his chest.

I should really get a review of these up because they are phenomenal. Any Aliens fan should be checking these out. The Xenomorph is easily one of the best figures I've purchased this year. 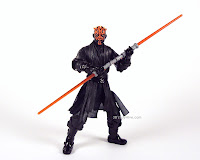 And now back to Star Wars... When I started collecting intensively in late 2008/early 2009, there were lines drawn. The was stuff I promised myself I would not get into. Star Wars was one of them. I dabbled in the Power of the Force line in the mid-to-late 90s and picked up a figures from Episode I, but I knew the temptation to go nuts was there. I had a buddy in high school who collected every figure, all MOC. It was nuts!

Although I almost bought into the "Vintage Collection" a couple of years ago, it was mostly easy to avoid the 3.75" figures. Last Summer I contracted 3/4ths scale fever, buying a bunch of Marvel Universe and G.I. Joe, but by early 2013 I was over it. That scale is great for army building and vehicles, but I found figure displays to be boring unless there is something big to display the figures around.

The traditionally expansive nature of Star Wars action figures led me to believe they would never get made in 6" scale. Well, Hasbro finally decided it was time to give it a shot and the execution is amazing. So far I've only picked up Darth Maul and R2, both really nice. My goal is to assemble the main cast from the original trilogy: Luke, Leia, Obi-Wan, Vader, Han & Chewie. Of course, there are exceptions... Maul, Boba Fett... Jabba the Hutt.

Anyway, I'll be reviewing one of those two soon, so I'll save my thoughts/hopes for the line then.

Finally, while taking my daughter shopping at Toys R Us for her fifth birthday, I found the Giant and the Rock from WWE Elite series 22. I had just missed new cases at my local Target and Walmart the day before, evidenced by the leftover Kanes. I know I previously stated I would pick up that Kane, but cash is getting tighter with all these new lines and I basically have the same figure already (E19).

At TRU I found Giant hanging on the WWE pegs behind Tensai and a couple of Big Shows. I immediately grabbed him then scoured the aisle for any signs of Rock or Sandow... no luck. After my daughter finished picking out her b-day gifts, we made our way to the checkout lanes. They were all closed save for the Customer Service desk and Electronics.

We stood in line at Electronics and I glanced over at an endcap full of iCade machines which I've thought about getting for awhile and were now being clearanced. Lo and behold, laying on top of the iCades was an WWE Elite package with "THE ROCK" printed on the side. I walked over to it, imagining the box had been ravaged for the new WWE title belt, picking it up I discovered the box was intact and nothing was missing!

I will more than likely get to a Giant review first, but the Rock turned out really well in this series. I've already updated the Title Belts page with the new strap, too.

Currently there are a couple of items in my "Pile of Loot" at BBTS, but there's a shit-ton of stuff on preorder including the aforementioned Aliens series 2, Predator series 11, Star Wars Black wave 2 and a few others.