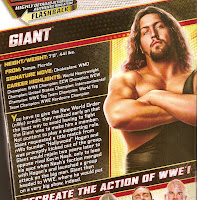 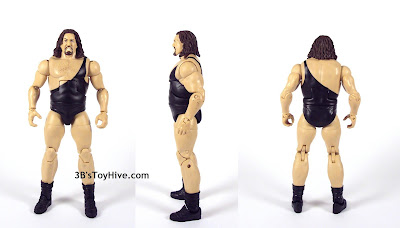 Being that Mattel has released a bunch of Elite Big Show figures already, it should be no surprise that the Giant features a lot of parts reuse. His body is mostly made up of the series 4 Big Show which features the non-singlet torso sculpt. That would have been mostly okay if Giant included cloth ring attire. Instead Mattel just painted the singlet on his body and I feel it cheapens the figure. Ironically, that's probably the same thing MDT thinks, only in a positive way. 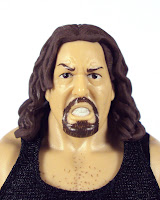 Giant's new parts are his head, lower legs and boots. The head's been floating around at least a couple of years as test shots leaked out a while back. He gets the two-part head/hair treatment and surely makes Big Show long for the days when he could grow long locks.

The expression is mean and close enough given Mattel's cartoonish style. One thing I find distracting is his mouth. Specifically the teeth. The problem is the gums are not painted.

They're sculpted, but ended up completely white just like the teeth. There's also no paint in the negative spaces to bring out the detail of each tooth which, again, are all sculpted. I may have to get in there with some watered down paint to give his mouth  some detail. 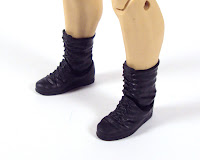 The lower legs were resculpted to accomodate the shorter ring boots Giant wore. It's kind of funny MDT opted to tool new lower legs for the Giant when they've neglected to do the same for the last several Big Show figures, including his latest version also found in series 22.

Giant even called for new boot molds while a revised Big Show could simply reuse Undertaker's over the calf boots. I don't know, it seems like simple solution to me, but I'm not in the toy designing & manufacturing business. I guess it's just logistics. 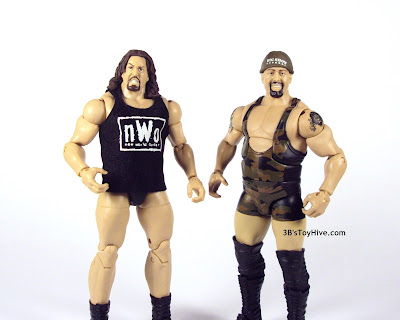 Giant includes only one accessory: an NWO tank top. It's the first time we get a proper "New World Order" t-shirt in the line inspite of two previous NWO figures (Kevin Nash & Macho Man). Thankfully it's cloth with a velcro closure on the back, making it really easy to put on the figure. 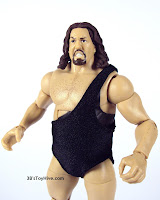 I'm glad he included the NWO tank because it covers up the silly painted singlet well. I would really have liked Giant to include a removable cloth singlet like Legends series Andre the Giant, thus giving us the option to display him with his ring singlet, or removing it and displaying him with the NWO tanktop.

When I first learned Giant would only feature a painted singlet I assumed I could just put Andre's on him and he'd look alright. But as you can see in the image to the right, the painted singlet rides up higher on the left side of the figure.

I suppose there's a chance Ralph's Figure Clothing might make an accessory for him, but I'm not aware of one at this time. 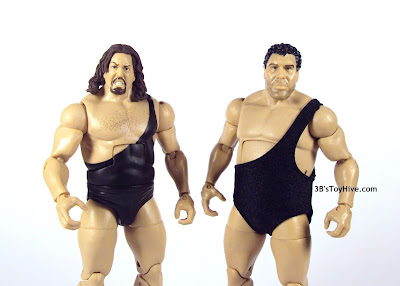 Giant turned out mostly well. The unfinished mouth and painted singlet are relatively small nitpicks. And I have to admit the positives outweigh the negatives. I'm glad to see new lower legs and boots on a figure that could have easily ended up as the E4 Big Show with only a new head. I should also note that MDT improved their goattee application by not making it completely solid like some of the Rock's figures.